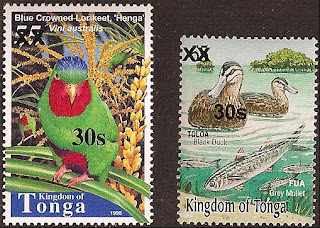 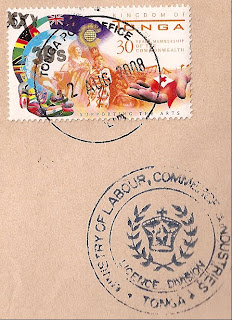 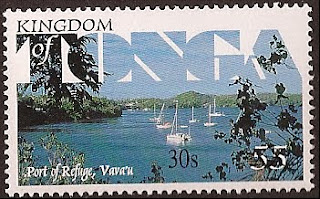 The main highlight for me when I recently visited the rather quiet, diminutive and expensive-to-travel-to "London 2010 Festival Of Stamps" (why do all these affairs in Britain have to be held in London?) was my visit to the stand of the dealer Steven Zirinsky from New York where I was able to see and purchase some of the latest Tongan surcharges which he had written about in a recent edition of Gibbons Stamp Monthly and which are of more importance to stamp collectors than most other modern philatelic emissions since the Tonga Post Office really does produce them to be used on mail rather than to bleed collectors of money. Unfortunately these items are not sold to collectors so that they are so rare that they are difficult to find and shockingly expensive to buy. But they are REAL postage stamps. In his article, Mr Zirinsky described how Tongan postal rates were increased from 20s to 30s in 2008 and to deal with this three surcharges were produced by hand stamping previous issues. They are exceedingly rare. Two of the items were Niuafo'ou issues of 1998 and although he had one on cover he was not able to put a price to it for the present and the item was not yet for sale. The third handstamp, the 2000 Commonwealth Membership 55s surcharged 30s, was being sold for $700 on cover and I believe he had three different covers for sale. After the handstamps, three machine-printed surcharges have been produced - the first on 21 November 2008 being the 55s depicting Vava'u Port Of Refuge. The illustrations here depict the three machine printed stamps and the Commonwealth 2000 hand-stamped item. Exciting, if expensive, Commonwealth stamp collecting.
Posted by White Knight at 09:31