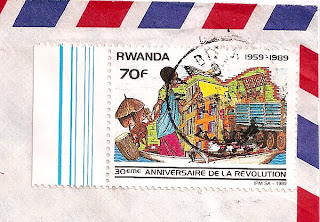 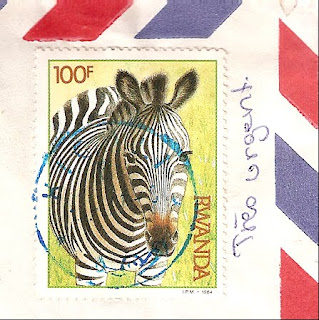 Since the mid-1990's, collectors of Commonwealth stamps have had three new countries to deal with - one of them a territory only a fraction of which had been under British rule until the beginning of the 1960's (Cameroun) and the other two which never had constitutional links with Britain or any other Commonwealth country at all (Mozambique and Rwanda).
Rwanda had been part of German East Africa from 1894 and was taken over by Belgium in 1916 during the First World War. Prior to German occupation the country's history was one of settlement by the Hutus from the tenth century but they had become dominated by the Tutsis from the fourteenth century. In 1919 the territory became part of The Mandated Territory of Ruanda-Urundi under Belgian administration. Whilst still under Belgian rule the Hutus rebelled against the Tutsis and on 2 October 1961 King Mwami Kigeri was deposed by the dominant PARMEHUTU party which formed a government on 1 January 1962. The Belgians granted independence to Rwanda on 1 July 1962 as a republic but in 1990 a civil war broke out between the Hutu and Tutsi populations which culminated in appalling massacres of the Tutsis and moderate Hutus in 1994. The country gradually recovered and elections were held in 1999 which brought a unifying government to power. The new president largely blamed the French for meddling in the country and causing the disaster which had befallen it and consequentially led the country away from the Francophone sphere of influence towards the English-speaking group of nations and, particularly as he received support from Uganda during the civil war, he saw advantages for Rwanda in joining The Commonwealth. After years of working to receive approval for its admission to The Commonwealth, Rwanda finally became a member of the organisation on 28 November 2009 at the Commonwealth Heads Of Government Meeting in Trinidad. Completist collectors of the stamps of The Commonwealth were therefore faced with a new country to collect.
Very reasonably the editor of Gibbons Stamp Catalogues begins listing of newly joining countries at the first issues after the date of admission of the country to The Commonwealth. This is a relief since the Commonwealth collector is not then faced with decades of previous stamp issues to track down and buy although it means that any collection of these countries begun in such a manner falls a long way short from telling the postal history of the territory. Rwanda has pleasingly had an ultra-conservative stamp-issuing policy in recent years and apparently has not issued any new stamps since 2003, issues before that date additionally being quite infrequent. But in some ways that is a little disappointing since the pleasure of knowing that we have an interesting new philatelic entity to collect is rather thwarted by the fact that there is not actually anything to collect at present. What to do? I thought it might be reasonable to make a small collection of the stamps that are currently available at Rwandan post offices for use on ordinary mail. Sadly I live a long way from Rwanda and have no opportunity to visit the country to see what is actually being sold. So I suppose that looking at recent mail coming from Rwanda is another approach but unfortunately I have not yet been able to track down a source of such items. So for the present I have contented myself with buying some covers from the early 1990's and early 2000's (presumably mail during the mid and late 1990's was severely disrupted by the civil war) and that has provided me with a philatelic introduction to this new Commonwealth member. The stamps on the covers all seem to have subjects of local relevance and the circular postmarks, most in blue ink while I also have one in violet and another in black, are an introduction to the country's towns from where the mail originates. Perhaps, after years of trying to gain admission to The Commonwealth, Rwanda will make a stamp issue to commemorate its successful application but if it does I do not know how long it will be before stamps collectors discover that such an issue has been made. At least at the moment we are not faced by a tsunami of agency-produced stamp issues which have no relevance to Rwanda and which have little chance of ever getting used on the mail in the country.
The illustrations depict cancellations from the town of Nyabisimdu, the town of Butare in southern Rwanda and the capital city of Kigali. The former is in black ink and dated 22 August 1991, the second is in violet ink and probably dated 2002 and that from Kigali is in blue ink with a date of 30 January 1991.
Posted by White Knight at 01:55