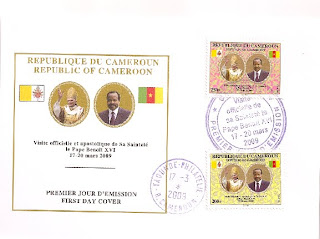 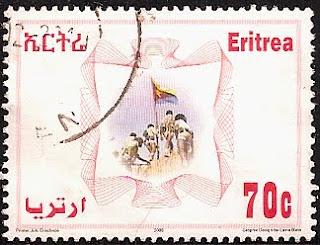 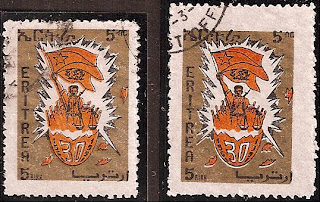 On 1 September 1991 the new Eritrean Postal Administration opened a number of post offices - at Asmara, Assab, Adiquala, Adikeih, Akordat, Barentu, Decemhare, Ghindae, Mendefera, Masawa, Keren, Tessenai and Senafe. and the first postage stamps were issued on the same date. A set of three issued in a quantity of 20000 of each value was released in three colours printed by Adulis Printing Press in Asmara, the Eritrean capital city. The stamps are featured in a catalogue of Eritrean stamps of the period 1991 to 2004 produced by The Philatelic Bureau in Asmara and the illustration (immediately above this text) depicts three very crudely produced stamps with rough irregular perforations. Two other values were also produced later (not mentioned in the Philatelic Bureau catalogue) which included a 5 birr value. These are listed in Stanley Gibbons Catalogue but are unpriced and again very crudely produced on very thin paper, very much resembling the original three values in the quality of the finished product. I have two examples of the 5 birr which while both being alike in design, are printed on different sizes of paper ( see illustration above) so that one of them has much wider borders to the stamp. Last year I obtained a set of the original three stamps from Herrick Stamps in New York (third illustration) but was surprised to find that they vary very considerably from the items depicted in the Eritrean Bureau Catalogue - they are not only redrawn but also much more professionally produced. Early commemorative stamps of Eritrea from 1993 to 1995 were produced by BDT, Enschede and also in Rome and one wonders if the redrawn set originate from any of those printers. I have yet to see a set of those first stamps as illustrated in the Eritrean Philatelic Bureau catalogue but presumably the more primitive versions are those arising from the Asmara printer. It seems to me that there are many questions yet to be answered about this particular stamp issue.
News of new issues from Eritrea is slow to arrive and only in the last few days have I obtained a stamp I have not previously seen (4th illustration above text) despite having visited Eritrea (including several post offices and the Philatelic Bureau in Asmara) in November 2008. The stamp is valued 70c and depicts Eritrean resistance soldiers with the flag of the Eritrean People's Liberation Front and has a "2008" imprint in the lower border along with the name of the designer, "graphic design by Laine Biala", at the lower right and that of the printer, Joh Enschede, at the lower left. This single value is probably part of a bigger set and I wonder if it commemorates the 30th anniversary of the liberation of the town of Nafka in 1977, a significant event in the Eritrean struggle for freedom. No doubt all will become clear eventually. Although the stamp has a 2008 imprint it may have been issued later than that since, as I say, I did not see it being sold in any outlet as late as November of that year. This particular example looks as though it was postmarked at Keren, one of the post offices I visited, and it was certainly not on sale there when I went.
Finally I turn my attention to one of the African countries which has come quite latterly to be a member of The Commonwealth - Cameroun (see posting no 1). Information on new issues from there is hard to track down and new issues are extremely infrequent. To the best of my knowledge the most recent issue has been the pair of stamps which commemorated the papal visit to Cameroun which was released on the 17 March 2009. The stamps feature the Pope and President Biya and are tastefully designed and nicely printed by Cartor. The illustration (top of the page) depicts the first day cover from Yaounde.
Posted by White Knight at 08:56