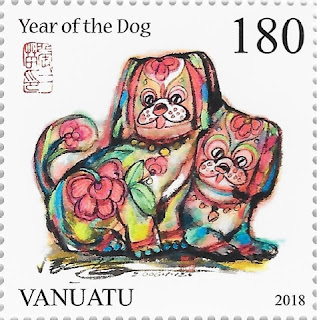 🇻🇺 Some collectors of new issues may be alarmed to read that the postal service of Vanuatu appears to have taken on the services of the USA-based philatelic agency Philatelic Collector Inc. which is rather poorly regarded by some collectors of modern stamps. Among the latest issues listed on Philatelic Collector's website is a pair of stamps and 1 miniature sheet issued by the Vanuatu postal service to commemorate Chinese New Year.
As shown below Philatelic Collector does not describe its relationship with Vanuatu as being "Vanuatu Philatelic Bureau" as it does for Tonga and Cook Islands but merely lists it as "Vanuatu - Year of the Dog" so there is nothing to yet say that the Vanuatu postal service has taken Philatelic Collector on as its continuing Philatelic agent. Perhaps that announcement is yet to come.
The date of issue is given as 1 November 2017 and the designer is Sophia Zhang. To date, Vanuatu Post has had an excellent record as an issuer of new stamps. Let us hope that it has not sold its philatelic soul. The new stamps are twee and garish and will not find their way into my collection of the stamps of Vanuatu. Rating:- 0. 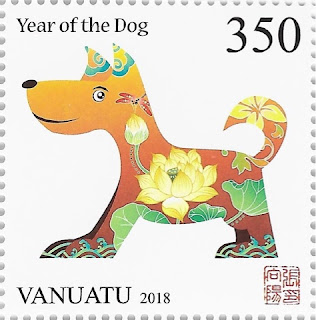 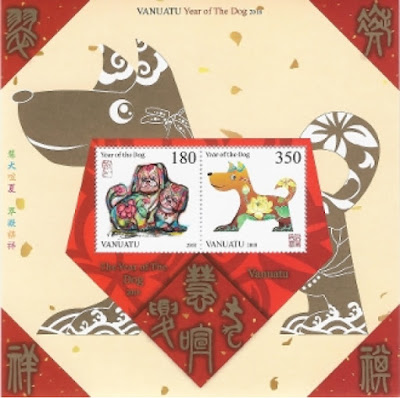 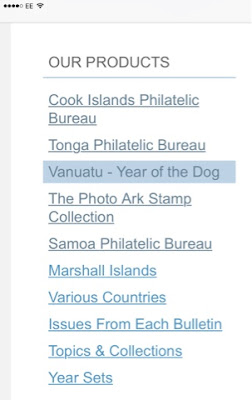 🇨🇰 Similar Chinese New Year stamps have also been issued by Cook Islands and its philatelic appendages. The date of issue is given as 1 November 2017. The issue is made up of 6 stamps and 3 miniature sheets (inscribed "Cook Islands", "Aitutaki Cook Islands" or "Penrhyn Cook Islands". 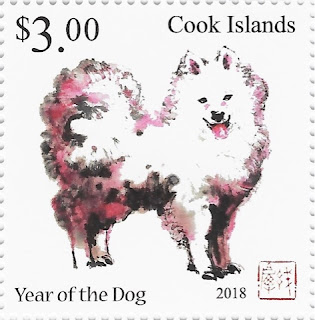 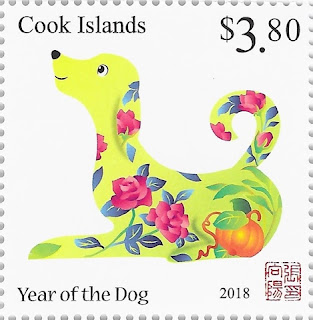 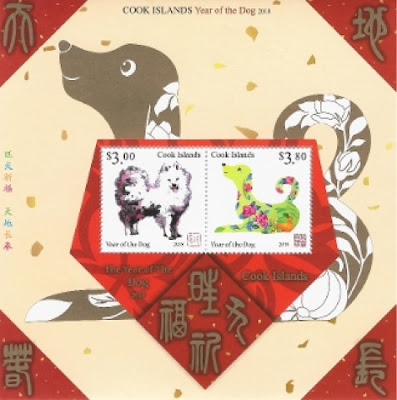 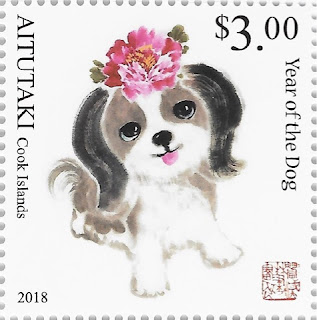 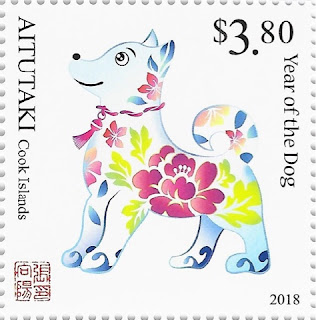 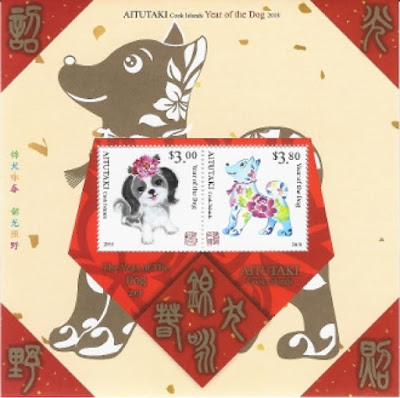 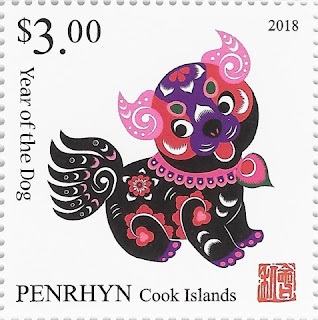 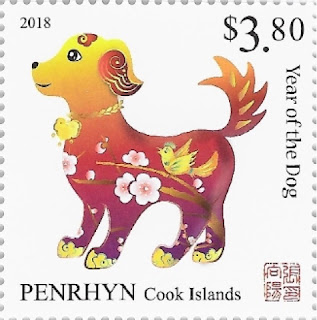 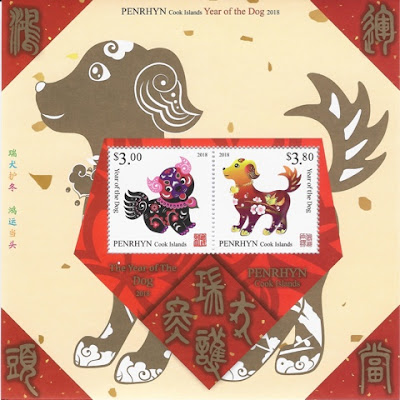 🇹🇴 We also have the same from Tonga and Tonga Niuafo'ou (a total of 4 stamps and 2 miniature sheets). Again the date of issue is stated to have been 1 November 2017. Though the stamps do not appeal to me I have no doubt that other people will find them to be appealing. Rating:- 0. 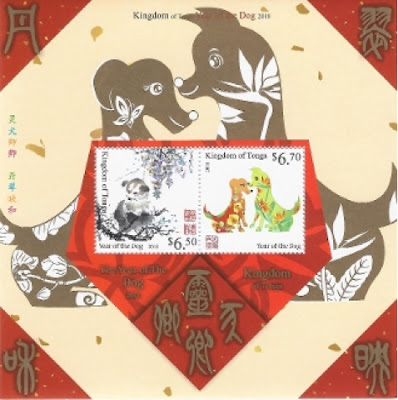 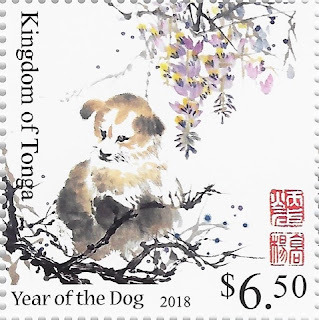 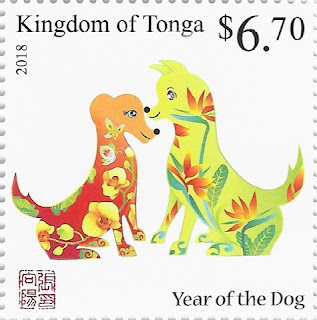 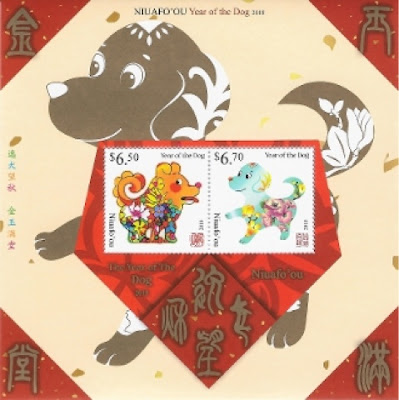 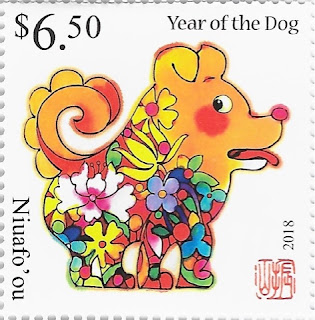 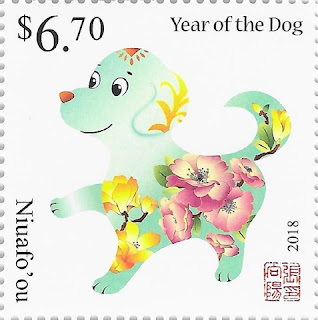 🇲🇸 In Blog 1047 I mentioned a sheetlet of 6 stamps which was released by the Montserrat postal service on 12 July 2017 on the subject of the Soufriere volcanic eruption. It appears that a second sheetlet of 6 stamps was also issued which depicts buildings in Plymouth, the destroyed former capital of Montserrat, and these make an interesting portrayal of the pitiful way the island was afffected by the volcano. Rating:- ****. 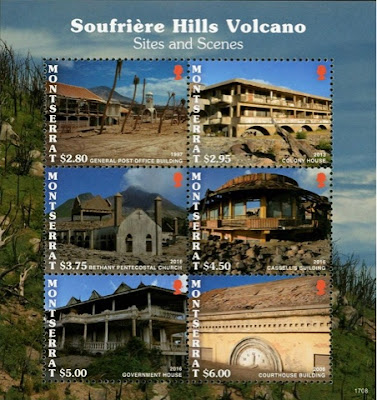 🇰🇳 The Beijing and New York-based philatelic agency, IGPC, has released 1 sheetlet containing 4 different stamps and 1 miniature sheet with the name of Nevis printed on them to commemorate the Platinum Wedding Anniversary of Queen Elizabeth II and The Duke of Edinburgh. Rating:- *. 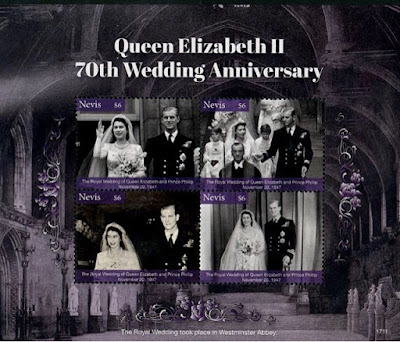 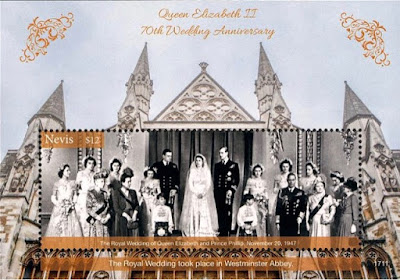 🇬🇬 Guernsey Post will issue 6 stamps and 1 miniature sheet on 1 February 2018 to commemorate a subject which has very little to do with the island - Chinese new year which will be the Year of the Dog. This is the fifth issue in this ongoing Lunar new year series which presumably means that we have another 7 years of such issues before the cycle is completed.
Although I'm a great dog enthusiast I dislike this set and will not be adding it to my own collection of Guernsey stamps. The set was designed by Chrissy Lau and the designs feature stylised renderings of the Pekingese breed. Rating:- *. 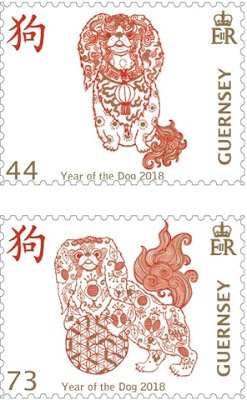 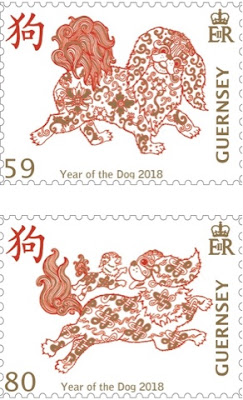 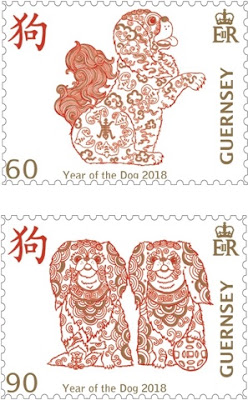 Guernsey Post then intends to release 1 miniature sheet on 14 February 2018 for issue at the Spring Stampex 2018 Philatelic Exhibition in London. To tie in with the exhibition's opening date, 14 February (St. Valentine's Day), the sheet which is inscribed "Alderney", contains 2 heart-shaped stamps and depicts "the view from The Lover's Chair", a clandestine meeting place for the 19th century local girl named Jacquine Le Mesurier and a Guernsey squire, which is an engraving by Paul Jacob Naftel, a Guernsey 19th century artist. An interesting enough issue, I suppose. Rating:- **. 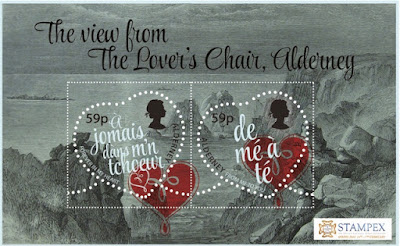 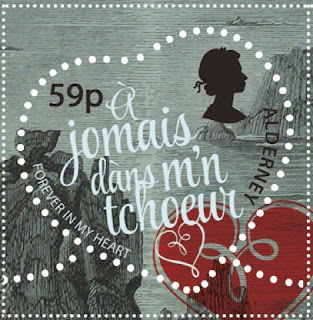 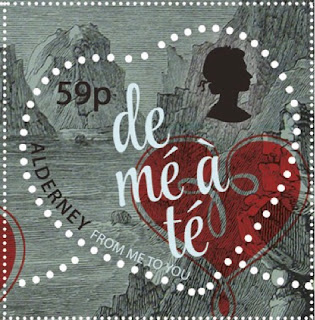