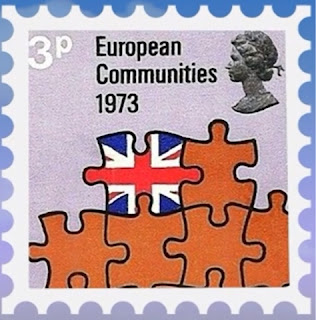 🇬🇧 Programmes about stamp collecting rarely make it on to television screens here in Britain in these modern times. Which is a pity as more exposure of the general public to stamps and stamp collecting in that medium may well give the hobby the boost it needs.
But today an item on stamps was shown for about 5 minutes or so on an important programme about British politics which is shown daily and is therefore titled, aptly, The Daily Politics. The item addressed the question as to whether Royal Mail should issue a stamp to commemorate British exit from The European Union (Brexit).
Two politicians were interviewed by a BBC reporter outside the Palace of Westminster and squabbled for five minutes about the question. One of the politicians represented the United Kingdom Independence Party (UKIP) and was a firm Brexiteer while the other represented a group which wished The United Kingdom to remain a member of The European Union, a so-called 'Remoaner'.
The UKIP politician was firmly convinced that 'Britain' should issue a stamp to celebrate the UK's departure from the EU while the Remoaner said that stamps should not be issued which related to issues which divided people but should be released to celebrate happy events 'such as the Royal Wedding'. The Brexiteer said that one particular reason to celebrate Brexit philatelically was that 'a stamp' was issued to commemorate Britain's entry into what was then known as 'The Common Market' and therefore another should be issued to mark the historic departure from the body which now calls itself The European Union. The Remoaner stated that 'tax-payers'' money should not be wasted on such a stamp issue.
The BBC reporter then enticed the politicians to comment on suggested designs for 'Brexit' stamps having shown 'the stamp' which had been issued in 1973 to mark Britain's admission to the European Economic Community. 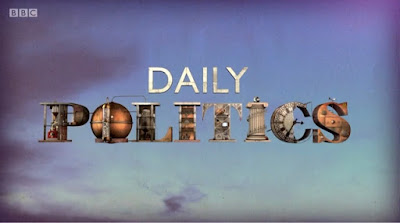 In fact The British Post Office, as we then called it, actually issued 3 stamps and whilst being somewhat similar to the design shown in The Daily Politics the issued stamps shown below were still considerably different from that depicted by the BBC in its politics programme. Poor research, perhaps? 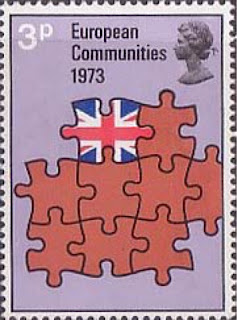 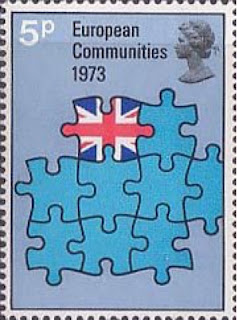 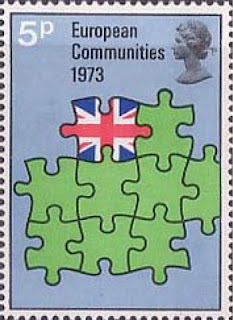 The first suggested Brexit design reused the jigsaw theme. This was wholly unacceptable to the UKIP politician as it placed the EU flag over the UK flag. The Brexiteer tried to put things right by turning the 'stamp' upside down but the BBC reporter was then forced to point out that this rendered the Queen's head upside down. Most unsatisfactory. 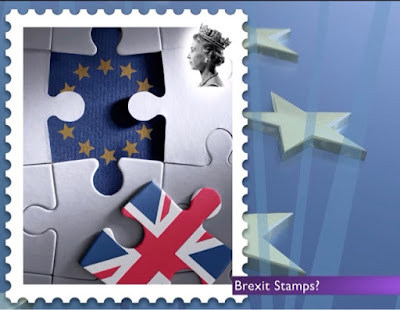 A second design was then shown which depicted a Union Jack balloon floating away from a large number of balloons with the design of the EU flag on them. The Brexiteer was not at all keen to see so many EU flags on a British stamp and so this second design proved to be as unsatisfactory as did the first design. 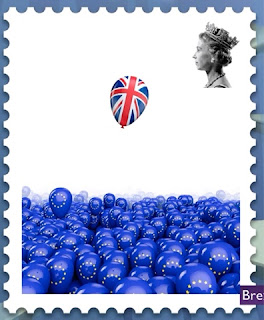 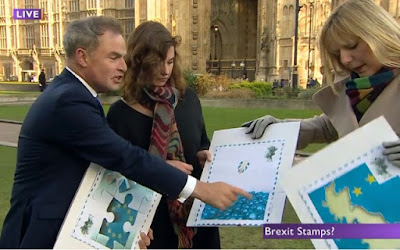 A third proposed design was then offered for the politicians to consider. This showed a UK-shaped hole where material had been torn away from the EU flag. This impressed the UKIP politician no more than had the previous designs. He objected again to the presence of the European stars in the design and felt altogether that everything that had been shown was far too negative and any Brexit stamps should feature designs which portrayed a positive view of Brexit and the perceived benefits to Britain which would accrue from its political separation from Europe. 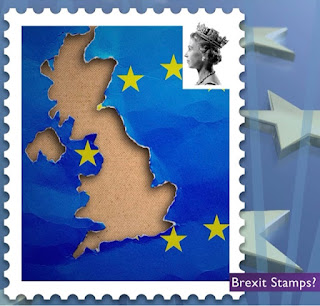 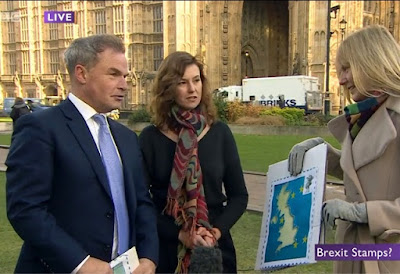 The whole interview was marked by poor insight into Royal Mail's new issue policies. Though unstated, the first aim of any new stamp put out by Royal Mail is not to upset anybody. Hence it took Royal Mail a very long time for it to commemorate the extremely historically important but controversial and divisive first female British prime minister, Margaret Thatcher, after her death and even then it chose to do so by including a stamp in a set of eight which featured politicians from all parts of the political spectrum.
As the issue of a Brexit stamp is likely to upset almost 50% of the population of The United Kingdom the chances of such an issue making it to our post office counters seem minimal.
The Remoaner politician also made the point that 'taxpayers' money should not be wasted on such an issue'. As far as I know no taxpayers' money is wasted on the production of new stamp issues. If anyone wastes their money on them it's definitely we stamp collectors who, I suppose, are also taxpayers when you think about it. Still, it was a meaningless statement on her part and misleading to viewers who are not stamp collectors. Don't these politicians know that Royal Mail has long been privatised?
Still this was a little outing for stamp collecting on a notable BBC programme and even if the programme's researchers could not track down a true example of the 1973 stamp issue at least it represented exposure for the hobby on a mainstream programme on BBC television. That is, if you can accurately describe programmes about politics as "mainstream".