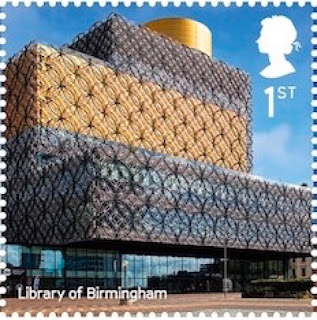 🇬🇧 I went to the Pinfold Street post office in Birmingham city centre the day after the release of Royal Mail's new "Landmark buildings" set to obtain the 10 stamps for my collection and I thought them to be attractive and interesting items. Naturally I was particularly interested in the depiction of Birmingham's own new central Library building which is situated just a few hundred yards away from Pinfold Street post office and thought it would be a good idea to buy a few extra examples of that particular stamp for when I write letters to friends elsewhere so that they could see what the building looked like. Someone else had had the same idea and I found that large numbers of the Birmingham Library stamps had been torn out of the se-tenant strips and indeed there were only a few complete strips remaining at the counter for anyone wanting to buy the complete set. These individual stamps had obviously gone down very well with local buyers many of whom surely must have been ordinary mail senders rather than stamp collectors who would presumably have wanted to buy complete sets.
I have long felt that stamps with local subjects featured on them would sell well in the areas of the country to which they are relevant both to residents of the area who would enjoy seeing sites and subjects they recognise appearing on the stamps they use and to visitors and tourists in the area who want a souvenir of the place they are visiting. They would be pictorial local definitives which doubtless would be unpopular with stamp collectors since the idea may open the door to numerous new issues as occurs in Japan but with a little restraint on the part of Royal Mail such stamps could highlight the various cities, towns and countryside around Britain and mean that visitors could always buy souvenir philatelic items to remember their trip to various places in the United Kingdom.
I often visit other parts of Britain myself and usually wish that I could have bought a souvenir philatelic item relevant to the place I visited. Royal Mail could start off by reissuing the 2016 Bridges set and this year's Windmills and Landmark Buildings sets in sheets containing a single design rather than in se-tenant format and then selling the sheets in the regions where the design is most relevant.
Of course some places already have local stamps - the Post and Go stamps sold at various visitor destinations such as museums and the Stratford upon Avon Shakespeare Birthplace Trust gift shop. I am often in the Stratford gift shop and am always disappointed to see that despite the numerous visitors there from home and abroad, there is no real interest in buying the special stamps from the Post and Go kiosk. The kiosk is not really highlighted and I suspect most visitors there don't notice it
or do not know what it is.
The dispensed stamps themselves are not really all that interesting and have little or nothing to do with Shakespeare - we have Machin Head stamps, Union Jack stamps and Flowers stamps. One of the flowers depicted in the strip is a thistle which has no connection with Shakespeare unless you start stretching the point and link it with his play Macbeth..

Of more relevance would be a resurrection of the previously issued Swan Post and Go stamp which alludes to Shakespeare's sobriquet as "The Swan Of Avon" and also to the numerous swans - disagreeable and aggressive if physically attractive - swimming on the Avon next to the Royal Shakespeare Company theatre.

I do wish that Royal Mail would come up with a new approach to its Post and Go stamps. Here is a real opportunity to make designs relevant to the place where they are being sold. It doesn't have to cost them a lot but I'm sure such stamps would sell well. They could even use classic old designs which means they wouldn't have to pay a designer to produce new stuff (though I suppose there might be royalties to pay to the original designer). Such items take just a few seconds to design on a computer - thus below we have some of my suggestions for Post and Go stamps to be dispensed in Stratford -

Designs which use David Gentleman's ckassic and brilliant 1964 designs which cmmemorated the 400th anniversary of Shakespeare's birth or the 2/6d value from the same set in which Hamlet holds Yorick's skull or designs from the 2011 RSC 50th anniversary set which depict famous British actors in such roles as Hamlet (David Tennant) or King Lear (Paul Schofield). I really believe these could sell well in Stratford if only the people at Royal Mail could use a bit of imagination when deciding what the Post and Go stamps should look like.

Just to show that this is not all about Shakespeare here's a design for the Bicentenary of HMS Trincomalee issue which actually depicts the ship rather than some overused Royal Navy logo.

🇮🇪 An Post, the postal service of Ireland, issued a single stamp on 13 July 2017 to commemorate the Women's Rugby World Cup to be held in Ireland from 9 to 26 August 2017. The issue was designed by Zinc Design Consultants and lithographed by Cartor and perforated 13.5. Rating:- ***. 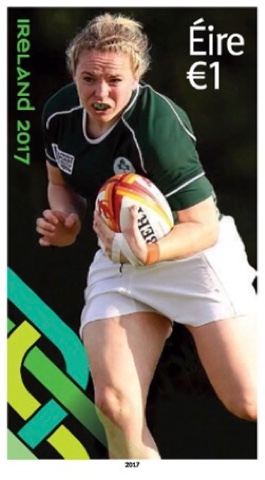