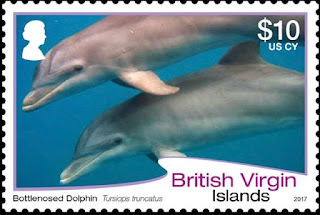 🇻🇬 After quite a long period since its last stamp issue (apart from the highly controversial Revenue stamps) the postal service of British Virgin Islands issued a new definitive set on 5 July 2017. The subject of the issue is "Undersea Life" and the stamps were designed by Bee Design using photographs taken by the BVI Conservation and Fisheries Department and printed in lithography by Cartor and perforated 13.5.
As we have come ro expect from Creative Direction this is an issue of well chosen photographs - I particularly like the $10 value with its design which depicts 2 Bottlenose dolphins - which have been placed pleasingly on the stamps and I will be happy to add the set to my BVI collection. Rating:- *****.
Thanks to Juliet Warner of British Pobjoy Mint for the above information.

🇮🇲 Rarely a day seems to go by without the Isle Of Man Post Office announcing some new philatelic product or the other. Here's another. A previously issued miniature sheet commemorating The Queen's sapphire succession anniversary was reissued on 30 June 2017 with an overprint applied which commemorated the 150th anniversary of the Confederation of Canada. That's another £3.75p please! Rating:- 0.