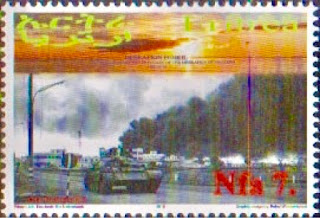 🇪🇷 Eritrea of course is not a member of The Commonwealth but it was occupied by the British from 1941 after they had defeated the Italian colonial forces at the Battle of Keren until 1952 when the United Nations, following the wishes of The United States government, handed Eritrea over to Ethiopia against the wishes of the Eritreans.
I have collected the modern stamp issues of Eritrea, which are not numerous, since Eritrea finally wrested its independence from Ethiopia and they make up an interesting footnote to my collection of stamps issued in Eritrea whilst it was under British occupation. I think it useful to mention them here as it's often difficult to find information about Eritrean stamps and let's face it, Eritrea doesn't really have many friends in the world ruled, as it is, by a tyrannical president whose actions have led to hundreds of thousands of young Eritreans fleeing the country and risking their lives to escape across North Africa and sailing in dangerous little boats to join the current mass migration attempts from Africa to Europe.
Poor Eritrea seems to have been one of the most unfortunate of nations in recent decades and its stamps, dedicated as many of them are to telling the story of the unfortunate country's fight for Freedom, make a fascinating collection. 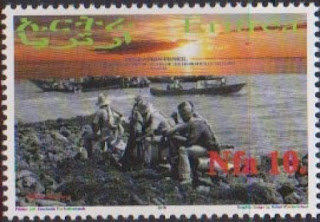 A few weeks ago, Stewie1980 reported on Stampboards that Eritrea had issued a set of 3 stamps during 2015 to commemorate the 25th anniversary of the Second Battle of Massawa (Operation Fenkil). Although he knew the date of issue - 10 February 2015 - he had no other details and no illustrations of the stamps but now I see that the excellent Bombay Stamps is offering this set for sale and we now can know what the 3 stamps look like.
The interesting trio depict battle scenes and pictures of liberation fighters of the Eritrean People's Liberation Front ((EPLF) engaged in land and sea assaults on the Ethiopian forces in Eritrea's chief port of Massawa. The defeated Ethiopians retreated to the town of Ghinda after being driven out of Massawa where buildings had been destroyed. I visited Eritrea in 2008 and much of the destruction was still visible even 17 years later. Independence was finally achieved on 28 May 1993 when the country was finally admitted to membership of The United Nations, a membership it had denied Eritrea 40 years before. Rating:- *****. 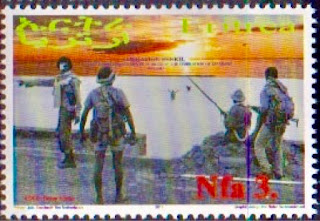 Bombay Stamps are also selling blocks of 8 stamps, as opposed to the miniature sheets previously reported, which were issued by the Eritrea postal service in 2013 to commemorate the 20th anniversary of the country's diplomatic relations with The People's Republic of China. The blocks of 8 are taken from sheetlets of 16 (2 x 8). The stamp issue had been a gift from the Chinese government to Eritrea. Rating:- *****. 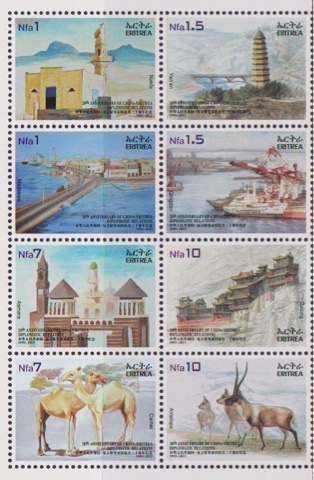 The Royal Mail Post and Go stamps which were reported in Blog 1023 which are dispensed by Kiosk A006 situated at the HMS Trincomalee Museum in Hartlepool and which commemorate the ship's bicentenary are depicted below. The stamps come in 2 forms - the "Union Jack" labels with the added inscription "HMS Trincomalee/200 Years" and the "Machin Head" labels with the same added inscription as well as a ship logo. Both types of course come in "Collectors strips" of 6 different values. As reported in Blog 1023 these items went on sale on 16 June 2017 and will be dispensed until October 2017. 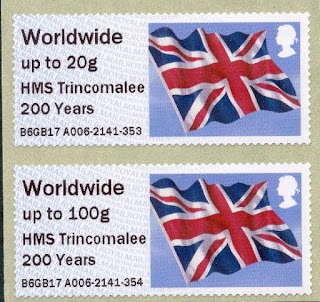 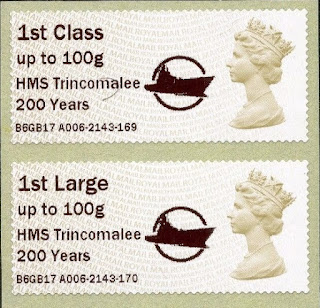