The current frenzy of issuing of Royal Mail "Post And Go" stamps continues apace and, if anything, has reached new heights of madness. In Blog 535 I mentioned the annual congress of the Association of Scottish Philatelic Societies which is being held at the Dewars Centre in Perth on 17 and 18 April 2015 and that "Post And Go" kiosks for Royal Mail and Jersey Post would be set up at the meeting. For the first time, Royal Mail has 2 kiosks at the congress - A006 and a new kiosk, A008. Jersey has its JE01 at the congress.
Kiosk A006 has dispensed Collectors' strips of the Machin Head stamps with MA13 date code and no date code as well as the Union Jack stamps with no date code. A008 has also dispensed the 3 different types (Machin Head MA13 and no date and Union Jack no date). The inscription applied to the above was "86th Scottish/Congress 2015". This inscription was also applied to the Jersey flag stamps from JE01. JE01 also dispensed strips of the "Endangered wildlife" stamps but without the added inscription.
But, as usual, that's not all. The stamps were also available on pre-order from the "back-office" machine B001, in this case the Machin Head MA13 and Union Flag no date stamps, but these had a different inscription:- " 86th Scottish/Congress" without the additional "2015".
Excluding the minor differences caused by the use of 2 kiosks rather than a single machine at Perth it appears that the Perth congress has resulted in 5 new Royal Mail collectors' strips which we will say represents 30 new stamps and 1 new Jersey Post collectors' strip (6 new stamps). The face value of each Royal Mail strip is £7.68p which means that the collector who simply must have all of these Royal Mail strips will have a total face value of £38.40p with which to cope. This bring the ongoing total face value of postally valid items issued in 2015 by Royal Mail up to mid-May to a shocking £273.74p.
Even then I haven't quite finished since I note from a comment in Norvic Philatelic Blog that the Spring Flowers Post And Go stamps (originally issued in 2014) with revised postal rates have been reported as being dispensed from an NCR kiosk and so if we add a collectors' strip of that issue to our grand total it then stands at £281.42p.
As regards Jersey Post, its website is depicting a Jersey Flag "Post And Go" stamp with the inscription "86th Scottish/Congress" - that is without the additional "2015" so one may presume that if this issue is ordered from the Jersey Philatelic Bureau this second type of overprint will be sent to the buyer. Thus Jersey Post appears to have not one but two Collectors' strips associated with this meeting which has lasted just 2 days. The price of a strip is £4.07p so collectors will have a total of £8.14p to pay for the Jersey "Perth" issues (do not forget there is additional purchase tax to add on that total).
Am I being unjust to call it "Post And Go madness?"

Meanwhile Royal Mail has published the design of half of one of the stamps which it will issue on 2 June 2015 to commemorate the 800th anniversary of Magna Carta. The half-design does not tell the whole story since the stamp appears to consist mostly of text with no pictorial element although in fact the stamps are actually double-width with a pictorial element on the left side of the stamp.
Royal Mail says that it has "worked closely with the Magna Carta 800th Committee to produce six Special Stamps depicting the Magna Carta itself as well as major international bills and declarations inspired by it that have been issued to protect civil liberties and rights". All 6 stamps will consist of text which quotes small sections of the selected documents which are Magna Carta (1216) and a quote from Simon de Montfort (1265) (both 1st class values), The Bill of Rights of 1689 and the American Bill of Rights of 1793 (both £1.33p values) and the Universal Declaration of Human Rights of 1948 and the Charter of The Commonwealth of 2013 (both £1.52p values). It is curious that the British Post Office should commemorate a foreign law as is the case of one of the £1.33p stamps.
Bad King John does not make an appearance on any of the stamps but his son, Henry III, is shown in silhouette confronting Simon de Montfort on one of the 1st class stamps. King William III and his wife, Queen Mary, are depicted on the Bill of Rights stamp. Thus Henry III makes his first appearance on a British stamp as does de Montfort and this issue goes some way to compensate for the non-issue of a specific set to commemorate the 750th anniversary of Parliament which occurred earlier this year:-

Cyprus Post's Refugee stamp for 2015 was issued on 4 April. The year of issue is inscribed in the bottom right hand corner of the stamp:- 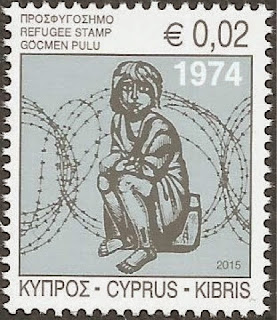