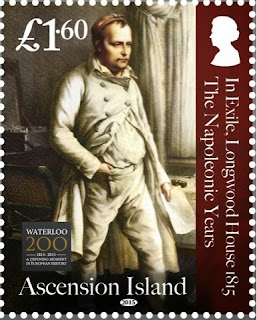 On 27 April 2015, Ascension Island will issue the third part of its ongoing series of stamps which commemorates the 200th anniversary of the British settlement of the island brought about by the necessity to place a garrison there because of the presence of the exiled Bonaparte on another South Atlantic island, St. Helena.
This issue is spectacular in that it coincides with the bicentenary of Napoleon Bonaparte's final defeat at the Battle Of Waterloo and Creative Direction (Worldwide) has selected four extremely interesting paintings to illustrate the downfall of the French tyrant who brought so much death and destruction to Europe. Thus we have images of Bonaparte at the Battle of Borodino in 1812, his contemplation of his first defeat which led to his first exile on Elba in 1814 and the Duke of Wellington whose forces brought about Bonaparte's last defeat at Waterloo in 1815.
But most telling of all is the portrait of the former dictator which depicts him in his final exile on St. Helena (shown above). Here he looks like a shattered man - pallid, pot-bellied, crushed, small and porcine. This is not the picture that a megalomaniacal narcissist who crowned himself Emperor would have chosen to be remembered by but it does seem very appropriate. This is going to be one of the best stamp issues of the year. The stamps were designed by Bee Design and lithographed by BDT. 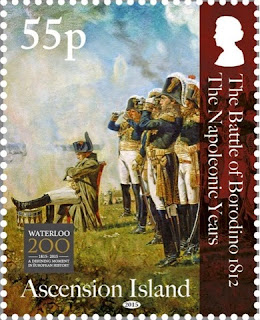 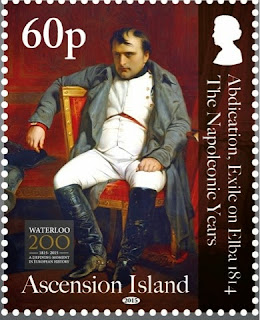 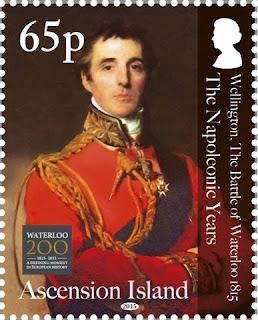 Isle Of Man Stamps issued 10 stamps (total face value £5.85p) on 10 April 2015 which depict scenes from the tapestry which commemorates the millennial anniversary of the Manx Parliament, the Tynwald, and which was completed and presented to the parliament in 1979 by the Women's Institute. As this event occurred 36 years ago it is strange that 2015 should be chosen to release a stamp issue to commemorate the tapestry at present unless of course it represents a second issue to commemorate the centenary of the Women's Institute. The tapestry depicts scenes from Manx history from the first landing of Vikings in the island. The issue was designed by EJC Design and printed in lithography. It seems as though hardly an edition of this Blog is written without me having to include news of yet another new issue from The Isle Of Man but at least the subject of the issue is locally relevant:- 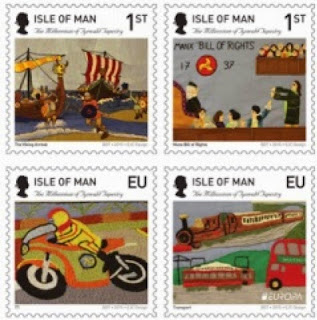 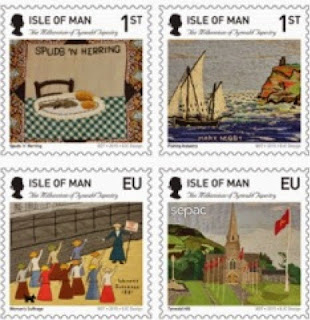 The South African Post Office issued a sheetlet of 5 different stamps on 2 April 2015 which commemorated the 8th World Congress on Nephrology which was held in Cape Town. The rather whimsical designs of the set were also devoted to the subject of "Healthy Living":- 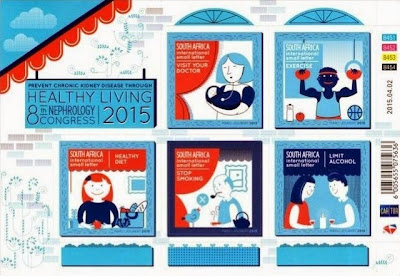 I have no idea of what exactly is the connection between the island of Jersey and the Hubble Telescope but it must be something very significant since Jersey Post appears to find it necessary to issue a large set of 8 stamps and a £2 miniature sheet on 24 April 2015 to commemorate the telescope's 25th anniversary with the total face value of the set and miniature sheet to collectors being £8.17p (not including added tax). The admittedly colourful and interesting set was designed by Two Degrees North and printed in lithography with silver metallic ink.
It seems to me that this issue is excessive and irrelevant in subject matter to Jersey - similar in fact to various issues from Grenada and St. Vincent which the Stanley Gibbons Catalogue editor has recently consigned to the Catalogue's (see Blog 538) - are not these excessive issues from Jersey equally deserving of such a fate?:- 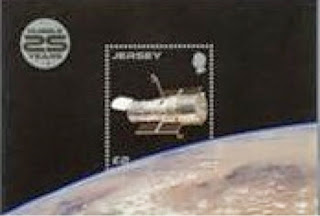 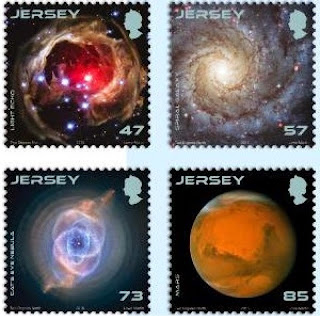 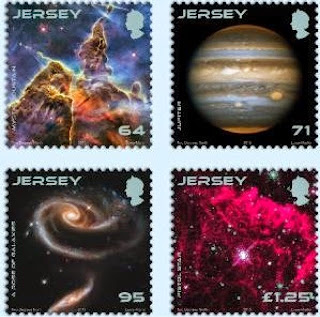