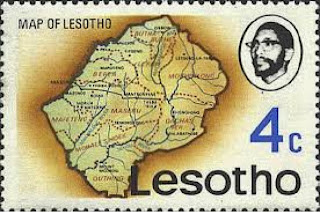 In the early hours of 30 August 2014, the armed forces of the Commonwealth kingdom of Lesotho, which had been the British Protectorate of Basutoland until 1966, occupied key buildings in the country's capital, Maseru, including the main police station. The prime minister of Lesotho was forced to fly out of the country to South Africa which completely surrounds Lesotho.
Whether this event will have any philatelic repercussions is not yet known. Lesotho has, to the best of my knowledge, issued no stamps since 2010 when it participated in the 3rd joint SAPOA issue which commemorated the holding of the FIFA World Cup Finals in South Africa. On that occasion a sheetlet of 9 different stamps, each showing the national flag of one of the countries participating in the omnibus issue, was released by Lesotho. In modern philately, few countries have managed to go 4 full years without issuing a single set of stamps.
Lesotho achieved independence on 4 October 1966 as a constitutional monarchy with a 2 chamber parliament. The first king of independent Lesotho was King Moshoeshoe II with Chief Leabua Jonathan as prime minister. 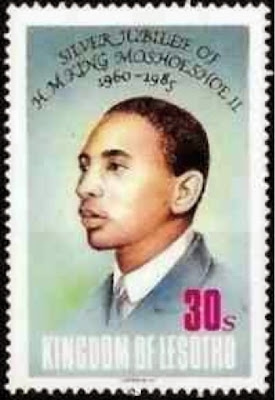 The first post-independence definitive series, apart from a set of overprints on the old Basutoland definitive series, was issued on 1 April 1967 and included a portrait of King Moshoeshoe II with the R2 top value featuring the king as the sole subject of the design (see below).
The first post-independence general election was held in January 1970 and Chief Jonathan's party was defeated but he refused to step down and suspended the national constitution, dissolved parliament and declared a national state of emergency. Chief Jonathan appointed an interim general assembly but over the following years internal and external opposition grew so that he was overthrown by the army in 1976 and a military council was set up. The Military Council transferred state executive and legislative powers to King Moshoeshoe himself who was to act on the advice of the Military Council. 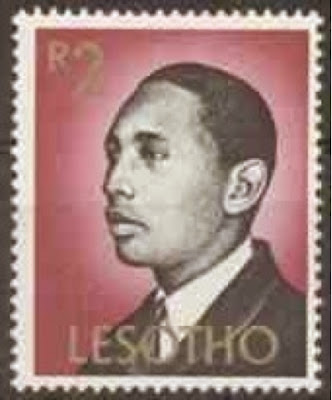 Coinciding with these events, the definitive series was reissued on 4 January 1971 with similar designs but with the king's portrait omitted. The R2 value was replaced with a design which depicted a statue of King Moshoeshoe I who founded the state of Basutoland in 1822.

A military government was established under Justin Lekhanya who ruled in coordination with the king. In 1976, King Moshoeshoe's portrait was restored to Lesotho definitive stamps by the inclusion of an older, bearded version of the king's image on the low values of a set released on 2 June 1976 and, fittingly, a portrait of him in military uniform on the R1 value. Moshoeshoe's portrait was also placed on a new definitive set which featured birds of Lesotho which was issued on 20 April 1981. Some values of this set were reissued much later in 1986 to 1988 and 1990 to 1991 with surcharges applied:- 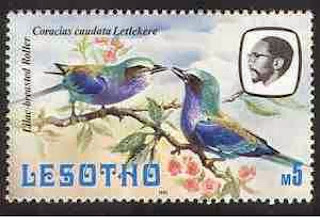 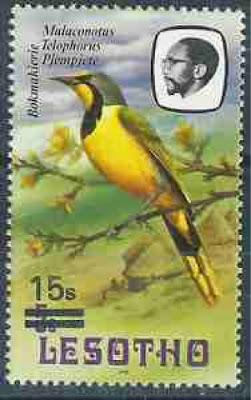 In the meantime, a new definitive set depicting local butterflies was issued on 20 January 1984 and these stamps too included a portrait of King Moshoeshoe in their designs as did a further set of bird-themed definitives which was issued on 5 April 1988:- 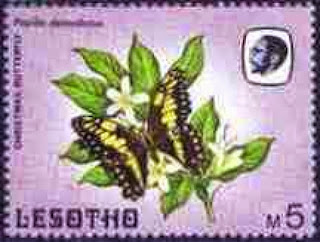 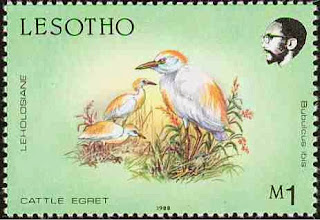 In 1990 Lekhanya stripped King Moshoeshoe of his executive and legislative powers and forced him into exile.

Lekhanya announced the establishment of a National Constituent Assembly to prepare a new constitution with the aim of returning Lesotho to democratic civilian rule by June 1992 but was himself overthrown in 1991 by a coup staged by junior army officers before the planned return to civilian rule could take place.
King Moshoeshoe refused to return from exile since he would have been allowed only ceremonial powers under the new military government led by Phisoane Ramaema and so his son, Letsie III, was installed as the new monarch in November 1990. As a result of these events a new definitive series was issued on 1 August 1991 once more featuring butterflies but omitting any royal portrait:- 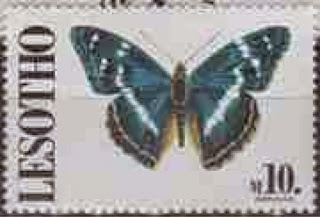 Moshoeshoe returned to Lesotho as an ordinary citizen in 1995 and his son abdicated in his favour so that Moshoeshoe was restored as monarch but his remaining time as king was short because he was killed in a motor accident the following year with the result that Letsie III was reinstalled as monarch in 1996.
The new constitution of 1993 stripped the monarch of his powers and the party of Ntsu Mokhehle won a landslide victory in multiparty elections. Stability was not achieved however as, during the following year, mutinies took place in the army and police forces and among prison staff. In August 1994 King Letsie, with help of some of the armed forces, staged a coup, suspended parliament and established a ruling council but, under domestic and international pressure, the king was forced to restore the elected government just 1 month later. A set of 4 stamps had been issued previously on 2 April 1994 which commemorated the 1st anniversary of the restoration of democratic government to Lesotho. The 20s depicted King Letsie III signing the Oath of Office, the 30s showed the Parliament Building, the 50s depicted the swearing in of Dr. Mokhehle as premier and the 70s depicted Major General Ramaema handing the instruments of government to Dr. Mokhehle:- 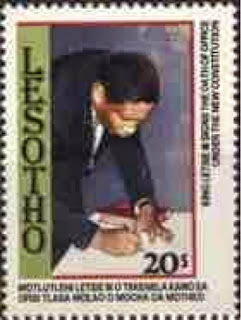 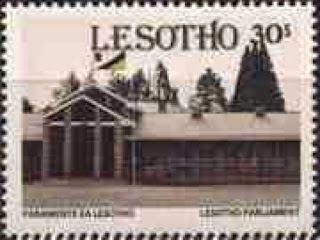 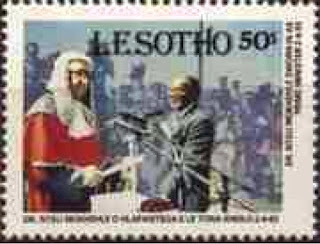 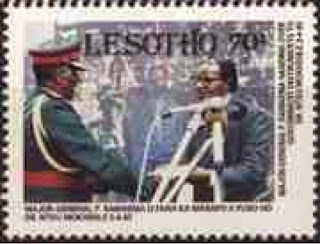 Elements of the police force staged a violent mutiny in early 1997 but it was put down by intervention from the army. New multiparty elections were held successfully in May 1998 but the defeated opposition staged violent demonstrations against the new government and the armed forces staged a mutiny in September 1998. South African and Botswanan forces were sent into Lesotho to put down the mutiny and restore order. Order was indeed restored and peaceful elections were held in 2002.
The 1st anniversary of the coronation of King Letsie III was commemorated by a strip of 3 stamps which was issued on 31 October 1998:- 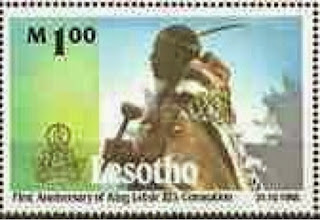 The king's marriage to Karabo Anne Motsoeneng took place from 18 to 20 February 2000 and was commemorated by a sheetlet of 4 different stamps which was issued on 18 February 2000:- 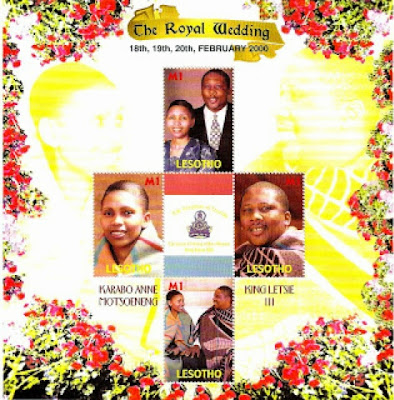 The current prime minister, Thomas Thabane, took power in 2012 at the head of the country's first coalition government. He suspended parliamentary sessions in June 2014 following feuding within the coalition. The present coup attempt appeared to follow Thabane's dismissal of the head of the army from his post.
Thus, Lesotho's modern history has been one of repetitive political instability which at times has been reflected in its stamp issues. Whether or not the latest events in Lesotho's troublesome political history will have philatelic repercussions remains to be seen.