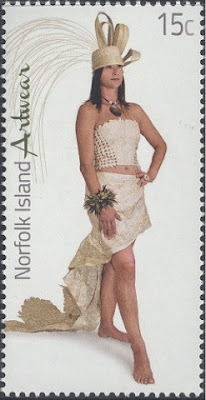 Norfolk Island issued 5 stamps on 26 May 2014 on the subject of "Wearable arts" as mentioned in Blog 440. The stamps were designed by Mary Pavicich and lithographed by Southern Colour Print:- 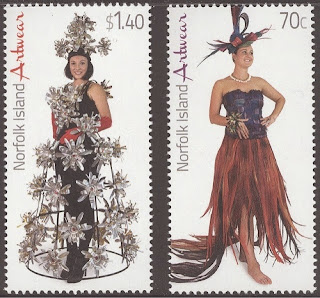 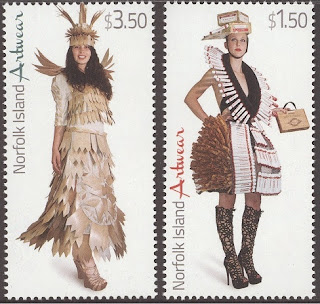 Ireland's An Post issued 2 stamps on 24 July 2014 to commemorate the centenary of the beginning of the First World War. The stamps, depicting Irish recruitment posters were designed by Ger Garland:- 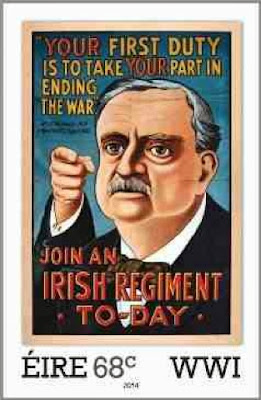 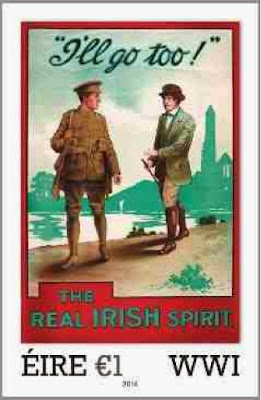 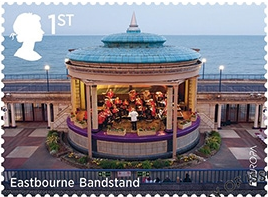 The stamp is one of 6 values and accompanying miniature sheet of 4 different stamps which are on the subject of "Seaside Architecture". They are quite colourful stamps and give an interesting impression of a traditional English summer holiday so one really must ask why is the set to be issued on 18 September, when the summer is ended, children have returned to school after their summer break and the first hints of autumn are starting to show?
The issue was designed by Why Not Associates from photographs taken by Lee Maudsley and lithographed by International Security Printers and Enschede (the miniature sheet).

The 97p value features Southwald lighthouse and is said to commemorate the 500th anniversary of Trinity House representing, like the Europa stamp, another very half-hearted approach to what is actually a very important and significant British anniversary. Trinity House was founded by Henry VIII on 20 May 1514 when he granted a charter to a mariners' fraternity called "The Guild of The Holy Trinity" "so that they might regulate the pilotage of ships in the King's streams". The first lighthouse was built by Trinity House at Lowestoft in 1609. In 1836 legislation was passed to put all the privately-owned lighthouses which had been built around England, Wales and The Channel Islands under the management of Trinity House.

The "Post And Go" labels issued by Royal Mail through the A003 and A004 machines at the Philakorea 2014 World Stamp Exhibition which will be held from 7 to 12 August will also be sold from the Philatelic Bureau in Edinburgh but produced from "back office" machine B001:-

The collector is faced with buying not one but two "Collectors" Packs because a pack is being issued for both the Machin Head labels and the Union Jack design with a total cost of £14.84p. As neither of these labels are to be sold directly from publically available machines situated in the United Kingdom, I shall treat them as exhibition souvenirs rather than postage stamps and therefore not bother to add them to my collection and as a result save myself almost £15:-

When I saw the issue to be released by The Isle Of Man on 1 September 2014I noticed that there were only 4 stamps in the set and I wondered if the Manx Post Office was correcting its recent behaviour of issuing excessive numbers of stamp issues and number of stamps per set. By modern standards a set comprised of just 4 stamps seemed remarkably restrained. Unfortunately, when I looked at the face values of the stamps, my hopes were dashed - the total face value is £6.18p - still a high face-valued set but you get fewer stamps for your money! The reason given for releasing this issue is that The Isle Of Man has been designated as a "Dark Sky" site which means that the island has one of the clearest night skies in Europe which of course is a great aid to astronomers.
The stamps were designed by Isle Of Man Advertising and lithographed by BDT:- 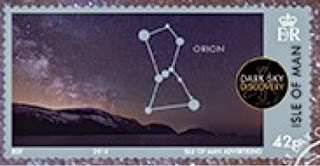 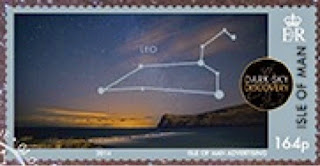 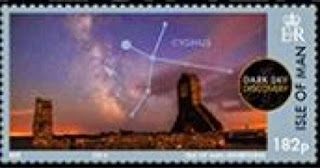 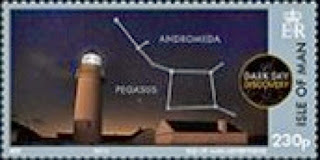