452. Flowers For Remembrance And The Scottish Referendum.

Royal Mail's newest pictorial Post And Go stamps will be issued on 17 September 2014 as exhibition souvenirs of the Autumn Stampex exhibition in London. Whilst I shall not bother buying the exhibition-produced items, I shall certainly visit my nearest post office which has "Post And Go" machines to obtain the proper postage stamp versions which, unlike the exhibition items, are freely available to members of the mail-sending public for use on the their letters and packages. I very much like this new set of "Symbolic flowers" which appropriately, in this First World War centenary year, includes a poppy design and in this year of the Scottish independence referendum, also includes a thistle. In fact the stamp will be issued the day before the referendum is held so it should prove popular with victorious Scottish nationalists as a souvenir of the day they decided to break away from The United Kingdom (if that is what comes to pass).
The rump United Kingdom is also served by 2 designs in the set - the rose of England and the flax of Northern Ireland. The Welsh daffodil was featured earlier in the year in the Spring Flowers Post And Go issue.

The two remaining designs feature the forget-me-not which also signifies Remembrance and the white heather which is considered to bring luck and good fortune. The stamps were designed by Kate Stephens from illustrations byJulia Trickey:-

I have not previously illustrated the miniature sheets issued by Hong Kong China which were issued on 24 July 2014 with the territory's new definitive series (Blog 446). As has happened before, one sheet combines the 4 highest values of the set while the 12 lower values appear together in the other sheet:- 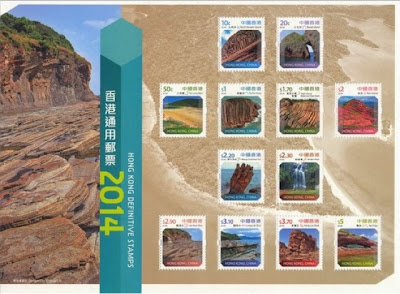 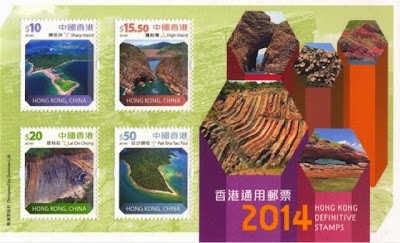 A Bahamas government article of 24 July 2014 about the previously reported "Underwater post office" set (Blog 440) mentioned that 2 further issues to be released by the Bahamas postal service during this year would be on the subjects of the 50th anniversary of the Ministry of Tourism and Christmas.
Barbados issued a set of 5 stamps on 16 August 2014 to commemorate the centenary of the opening of the Panama Canal. The designs emphasise the role of Barbadian workmen who participated in the construction of the canal.
Recent or upcoming issues of India are said to be:-
July or August 2014 - Liver transplantation;
August 2014 - Musicians of India -8 stamps;
August 2014 - The Gaiety Theatre Complex, Simla; 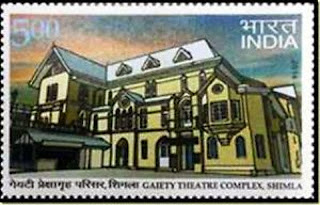 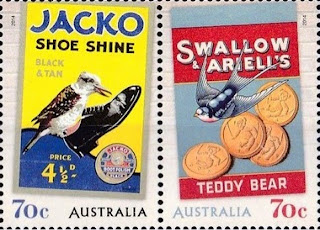 Two interesting new sets have been offered for sale by Peterthematics on the Delcampe Internet auction site recently and represent the first of the locally relevant issues from Tanzania about which I have seen any news for the years 2013 and 2014. Whilst most of the foreign agency issued stamps released with Tanzania's name printed on them have little or no relevance in subject matter to the country and are hardly worth bothering with, these "local" issues are intensely interesting, charmingly naive in their designs and are actually used on mail inside Tanzania - they are, in short, genuine postage stamps rather than collectables with theoretical postal validity.
The first such issue is a set of 4 stamps, 1 sheetlet of 6 different stamps and 1 single value miniature sheet on the subject of ceremonial costumes which was released on 30 November 2013.The printer's imprint is new to me and appears to be Garsu Pasaults which is a printer in Lithuania:- 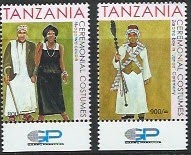 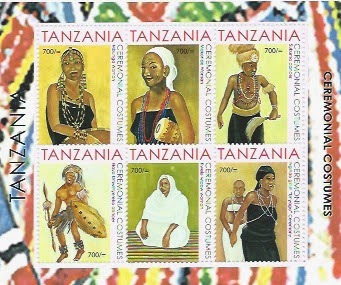 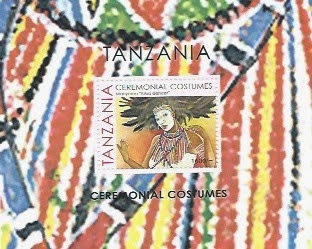 A set of 3 stamps and 2 sheetlets (one of 6 different stamps and one of 2 different stamps), and 2 miniature sheets was released 12 January 2014 to commemorate the 50th anniversary of the Zanzibar revolution which overthrew the Sultan of Zanzibar and established a short-lived Republic on the island before it was joined to the Republic of Tanganyika to form The United Republic of Tanzania. The issue was lithographed by Enschede:- 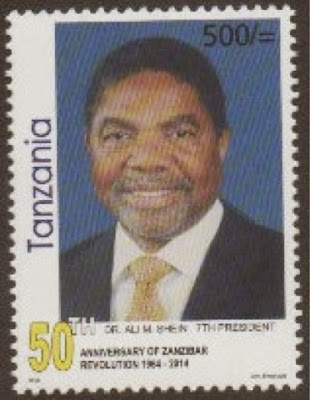 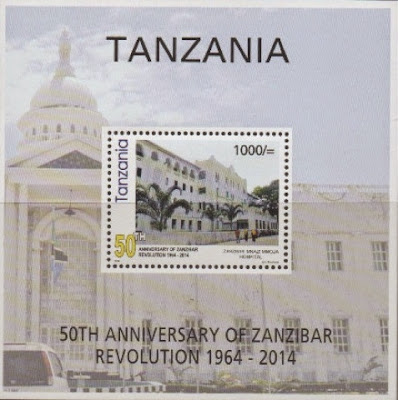 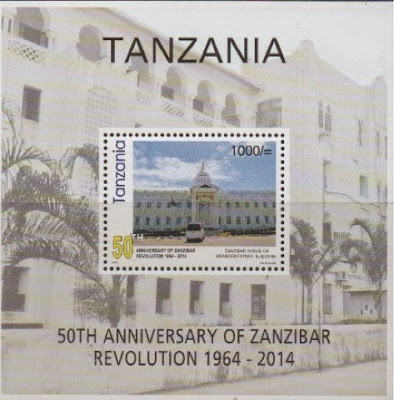 The upcoming Margaret Thatcher stamp from Royal Mail has caused a lot of interest if the number of views of Blog 451 (about 400 in 24 hours) is anything to go by. I have mentioned various previously issued Baroness Thatcher stamps in previous blogs (including the Blogs of 3 April 2012 [Kenya] and 9 April 2012 [postcard from China], Blog 228 [Ghana and Grenada], Blog 295 [St. Helena], 225 [Falkland Islands], 234 [Ascension] and 299 [St. Vincent And The Grenadines]. 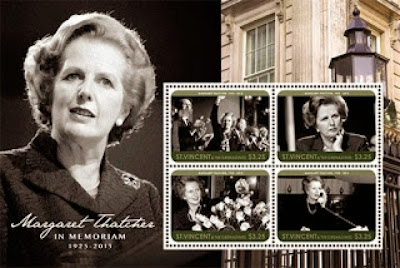 But 2 issues I have previously overlooked are worth mentioning for completeness even though the quality of design of both is pretty poor and the subject of the stamps is irrelevant to the countries whose name appears on these particular philatelic products which originate from a large New York-based philatelic agency.
The first issue was produced in the name of Guyana in 1999 and was comprised of a sheetlet of 12 different stamps which commemorated the International Year of The Elder Person as opposed, presumably, to the Year of The Older Person. This was an excuse to include 12 "elder persons", some of whom appealed more than others to thematic collectors, and among these was Margaret Thatcher who was honoured by being depicted by a rather poor portrait of her:- 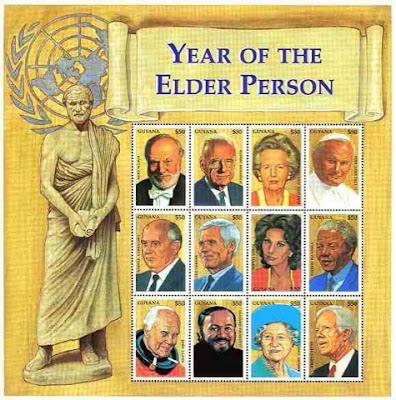 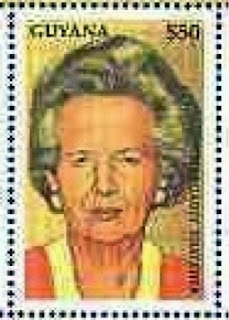 Baroness Thatcher reappeared on stamps with an appearance in a sheetlet of 18 different stamps issued in 2000 which had the name of Zambia printed on them and which commemorated the new millennium:- 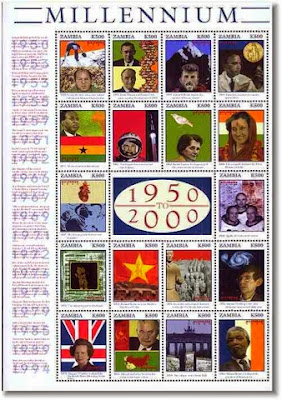 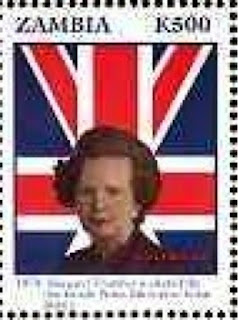 Changing the subject again, the terrible outbreak of Ebola in West Africa currently in the news made me wonder about the disease's depiction on Commonwealth postage stamps. While there have been numerous stamps released on the subject of other significant infectious diseases such as AIDS, tuberculosis, smallpox and malaria, I have managed to come up with only one stamp on the subject of Ebola - one value from a set of 3 which was issued by Uganda in 2001 to commemorate the International Year of Volunteers:- 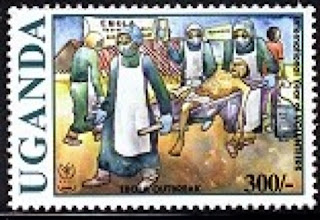 We might expect that more stamps on the subject of Ebola may appear in the coming months given that West African Commonwealth countries, including Sierra Leone and Nigeria, have been involved in this current Ebola outbreak.