454. More Tanzania And Other New Issues.

Peterthematics on the Delcampe auction site has had another recent set from Tanzania for sale. Again, I have not seen this set before and it comprises 4 stamps, a sheetlet of 6 different stamps and a  single stamp miniature sheet all on the subject of "Zanzibar The Mystical Islands" - the designs feature pictures of various Zanzibar tourist attractions. The date of issue was 26 April 2013:- 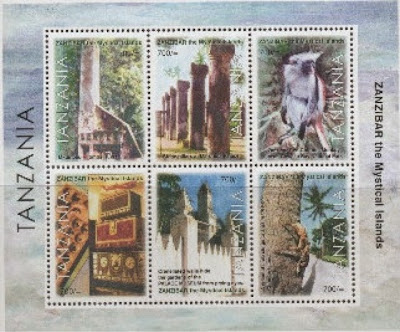 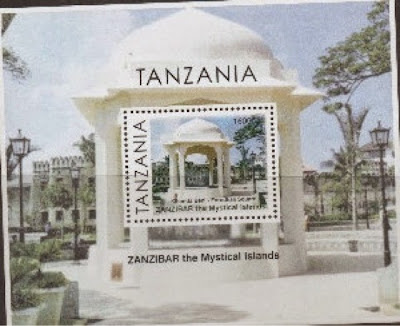 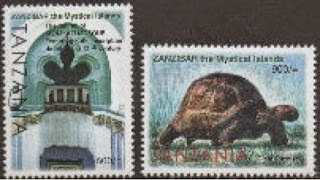 Pakistan issued 2 stamps on 11 August 2014 on the subject of "Pakistan 2025 One Nation - One Vision". The stamps were designed by Khuram Shahbaz and Mehvish Shah and lithographed by Pakistan Security Stamp Printing Corporation of Karachi:- 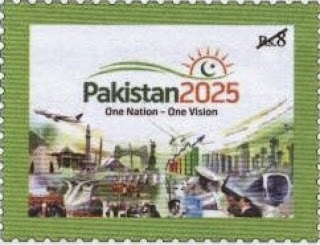 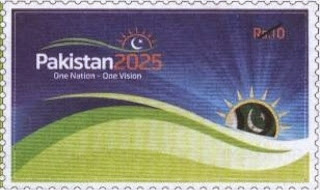 This week's issue from Australia Post will be released on 26 August 2014 and is on the subject of the Southern Lights. The set was designed by Lynda Warner and lithographed by McKellar Renown and is comprised of 4 gummed stamps, 2 x 70c self-adhesive stamps (only obtainable by buying a booklet of 10 x 70c - 5 of each design) and 1 gummed miniature sheet which bizarrely has the 2 x 70c stamps printed upside down in a tete beche format with the 2 x $1.40 values. Since there seems to be no special reason for Australia Post to issue this outpouring and given the vast amount of stamps it is producing on an almost weekly basis, this will be one of those sets I shall not bother to buy but merely mention it as a footnote in my collection. 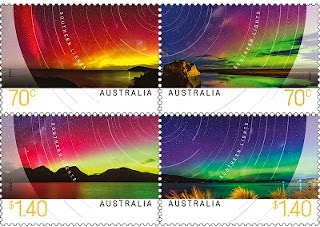 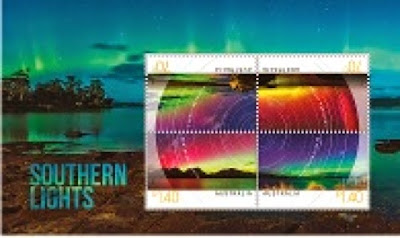 Tuvalu has announced 3 new issues which are said to have been released on 14 August 2014. They will all be footnote issues in my collection since none of the subjects featured have anything to do with Tuvalu itself - the subjects are Macaws, the 25th anniversary of the pulling down of the Berlin Wall and "World Famous Paintings" (I have not seen the designs yet but somehow I suspect that none of the paintings featured are by a Tuvaluan artist.)
I recently obtained the 4 sheetlets (each of 25 different stamps) and 3 miniature sheets issued by Kenya at the end of 2013 to commemorate the 50th anniversary of its independence from the above mentioned Peterthematics at a very reasonable price and I have been able to have a close look at some of the stamps. One or two terrible spelling mistakes on the stamps leap at you but, despite the shockingly high face value of the complete issue, it is all very interesting with one sheet spelling out the country's political history over the last 50 years (as shown below) and another depicting 25 designs which show numerous species of wildlife and other subjects related to the country's natural history and environment. 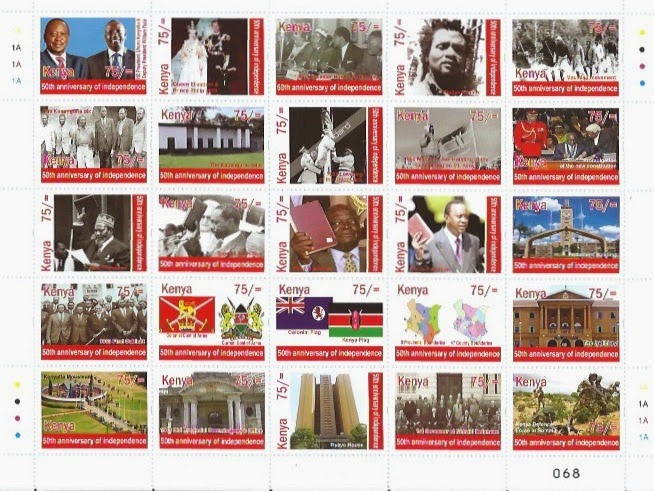 All very interesting but I do hope that it will be another 50 years before Kenya decides to issue such a large and expensive set again. One of the stamps is of interest to vexillologists because it depicts Kenya's flag when it was a British colony placed beside the post-independence flag - not many countries would be keen to depict the old symbol of its previous rule by a colonialist power:-