11 August 2022 - Issues for the four regions of the United Kingdom of Great Britain and Northern Ireland - Regional issues reissued with bar codes and self-adhesive - 12 stamps (3 each for England, Northern Ireland, Scotland and Wales. Designed by Sedley Place (England stamps) and lithographed by International Security Printers. Rating:- ****.

I like the regional issues though I long have felt that if Royal Mail had recognised how interested people are in their own areas then we might not have been stuck with the same, admittedly excellent, designs for decades. I should like to have seen full definitive series for each of the English regions - the North, the Midlands and East Anglia, the South West, the South East and London. For the three national regions (Northern Ireland, Scotland and Wales) and each of the suggested six regions I would have liked to have seen three special issues per year, each of relevance to the region for which they were issued. In addition there could perhaps have been, say, four to six national issues per year on subjects of relevance to all the nine regions and included in these could be Royal Mail’s ‘blockbuster’ issues (which I personally loath) whereby large profits could possibly be made by Royal Mail from pandering to those non-stamp collectors who have the need to buy merchandise relevant to whichever popular television/film/children’s book series to which they are pathologically devoted (see below).

Of course I realise that this means that Royal Mail would have 8 definitive series on the go (though I would not expect the highest couple of values to be included in anything but a United Kingdom national set) and up to 38 sets per year but each regional set in particular would not have to include more than, say, four to six stamps (as opposed to the eight to twelve stamps per set which occurs frequently at present) with total face value adjusted so that each set is sold at a reasonable but not enormous profit, the main profit coming from the blockbuster sets. One regional issue per year might be an ‘omnibus’, each region issuing a set of four stamps on the same subject of birds perhaps or royal visits to the regions (perhaps for The Queen’s 100th birthday or regional cuisine or famous sportspeople from each region or on the subject of diversity or identity in each region (to address current themes) … the potential is endless.

For collectors who quite reasonably might feel this would be all too much there would be the choice of collecting the issues of a single or several regions without bothering with the national issues (or vice versa) and there would still be plenty of opportunity for Royal Mail to extract large profits on collectables connected to their ‘blockbuster’ issues from non-stamp collectors who know no better.

I suppose it’s all too late for anything like this now though with the government’s stated policy of ‘levelling up’ the regions this would be Royal Mail’s own contribution to promoting provincial UK.

Unfortunately the present policy of those who plan UK new issues is centred on making as vast a profit as possible (after all, Royal Mail is a commercial business where shareholders’ needs come first) particularly from the merchandise associated with popular if trivial forms of modern entertainment which increasingly have little or nothing to do with The United Kingdom. The promotion of a national image and the recognition of its citizens achievements, culture and history (apart perhaps from virtue signalling to show that the organisation is in step with the latest social trends and not laying itself open to criticism of its view of society) through the UK’s postage stamps is now low down on the priorities of Royal Mail’s metropolitan elite higher management in the pursuit of profit. ‘Levelling-up’ is not necessarily a priority for such an elite and there seems little reason why promoting the regions would be of benefit to it. Hence I suppose we are stuck with these unambitious stamps representing just four regions - stamps which few people ever see being sold over the counter in their local post offices.

It seems that the Scottish nationalists will not rest until they have prised Scotland away from the United Kingdom and so it may not be too long before we do see more than these products representing that territory. Northern Ireland’s days in the United Kingdom may too be numbered but by the time there is a rump United Kingdom it is possible we will not be needing postage stamps and certainly not regionals.

On the subject of trivial, irrelevant new issues it appears that Royal Mail will launch its next ‘Blockbuster’ issue on the non-British subject of Transformers not to stamp collectors but instead to a convention of toy collectors at an extravaganza called TF Nation to be held at a hotel in Birmingham from 12 - 14 August. It rather begs the question of why Royal Mail doesn’t give up releasing pointless stamps and just invest in a toy factory to produce Dr Who, Marvel Comics, DC Comics, Transformers, James Bond etc action figures. Cut out the middle man and stop wasting time with stamps. 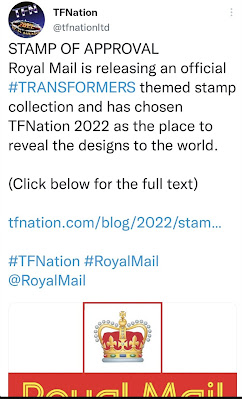 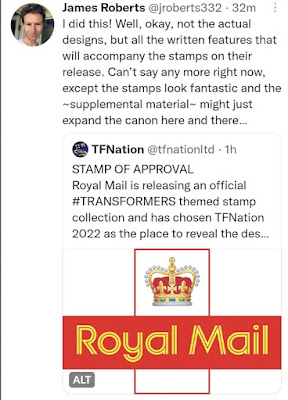