With all the philatelic activity centred around the Diamond Jubilee of Queen Elizabeth II, I had overlooked the news that another Commonwealth monarch had died on 18 March 2012 - King George Tupou V of Tonga. 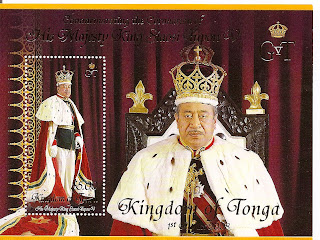 He had ruled the south Pacific Kingdom only since 27 September 2006 and his reign was characterised by Tonga's adoption of an extremely conservative policy towards the issuing of new postage stamps and apart from some surcharged stamps made necessary by a local shortage of certain values for use on ordinary mail only 6 stamps and one miniature sheet were issued by Tonga during the king's reign until the beginning of 2012 when a new philatelic agency took over control of the country's stamp issues and massively increased the output of Tongan stamps. Two stamps and a miniature sheet were issued in 2008 to commemorate the king's coronation which took place on 1 August 2008 (pictured above and below). 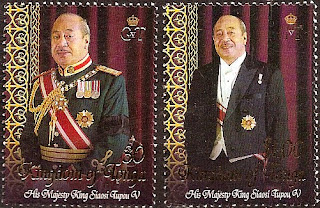 I have seen the date of issue of the stamps reported as the actual day of the coronation - that is - 1 August 2012 but I have an example of the $1.00 cancelled at Nuku'alofa on 25 July 2012 so that may have been the true date of issue:- 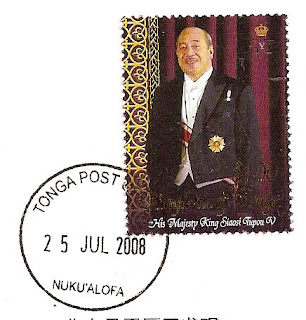 The royal predecessors of King George Tupou V have been depicted on a number of Tongan stamps over the years, notably on 2 sets of 4 and 2 miniature sheets produced by the Crown Agents for Tonga and Niuafo'ou and issued on 7 July 2004. In the mid-nineteenth century, there had been a protracted period of civil war in the islands and in 1845, George Tupou I became King of Tonga. He is depicted on the 30c value. 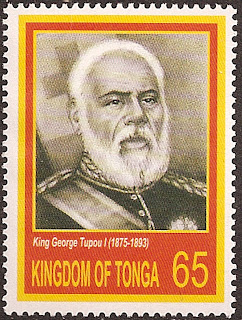 He was recognised as king from 1875 and was succeeded by his son, George Tupou II in 1893 and he in turn, by his celebrated daughter, Salote Tupou III, in 1918:- 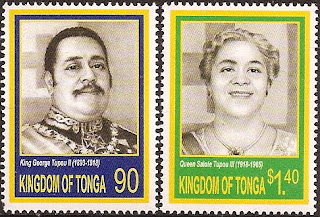 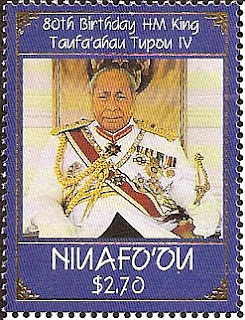 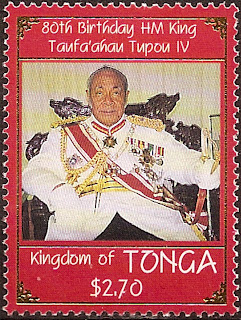 From July 2008 to June 2010, 10 different stamps were surcharged to produce 30s or 70s values (most have been described and illustrated in previous blogs) but no further commemoratives were issued until 23 December 2011 when 2 stamps each for Tonga and Niuafo'ou were released to commemorate Christmas; as I have previously pointed out, their appearance was a little late for use on Christmas mail.

Before the king died on 18 March 2012 in Hong Kong where he had been treated six months earlier for kidney cancer and subsequent leukaemia, Niuafo'ou had issued 2 sheetlets of 3 stamps each depicting local whales on 16 January and 4 World Wide Fund For Nature (WWF) stamps on 12 March. Tonga had issued a definitive set of 12 stamps depicting local birdlife on 8 January 2012 along with a miniature sheet that contained all twelve values, a single stamp and a miniature sheet which commemorated the Diamond Jubilee of Queen Elizabeth II on 6 March 2012 and 4 WWF stamps depicting the thorny seahorse on 12 March 2012. Hence only 33 stamps and 3 miniature sheets were issued by Tonga with Niuafo'ou during the entire reign of King George Tupou V - remarkably few for this modern philatelic age (although more than 50% of them were issued in the last 3 months of his reign!)

The king's funeral took place on 27 March 2012 and black and gold dressed Tongans carried his funeral bier as illustrated below.

It is slightly strange to think that the last issue to be released by the Tongan Post Office before the death of King Tafa'ahau Tupou IV was a set issued on 4 May 2005 which depicted local whales (illustrated below) and that just two month's prior to King George Tupou V's death a set also illustrating whales was issued for Niuafo'ou. Perhaps the new king will feel a little anxious if the Tongan Post Office decides to issue more stamps which depict whales during his reign! 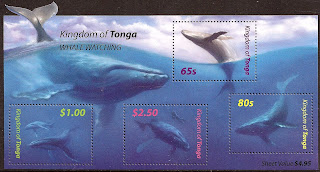 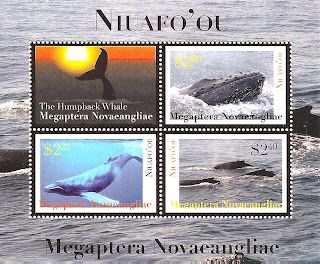 King George Tupou V was succeeded by his younger brother, Aho'eitu Unuaki'otonga Tuku'aho Tupou VI, to be known as Tupou VI, who is the third son of King Tafa'ahau Tupou IV and who was the prime minister of Tonga from 3 January 2000 to 11 February 2006. 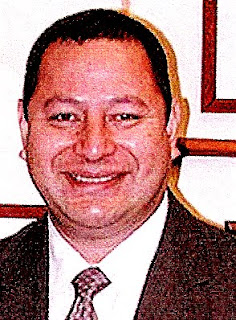 I have not yet seen any news of stamps to be issued either in remembrance of King George Tupou V or to commemorate the succession of King Tupou VI but doubtless Tonga's new philatelic agents will spare no energy in capitalising on the new monarch's philatelic financial earning power.