The Battle Of Goose Green. 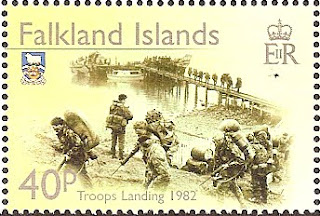 After British troops began landing at San Carlos Water in East Falkland on 21 May 2012 as shown on the above stamp which was issued by The Falkland Islands on 14 June 2002 as part of a set of six stamps which commemorated the 20th anniversary of the liberation of the islands from Argentine occupation, the British government wished the armed forces to prioritise the recapture of the settlement of Goose Green (see blog of 26 May 2012). On 26 March 2012, 2 Para set out for Goose Green. From the early morning of 27 May to 28 May, the 500 men of 2 Para with artillery support from 8 Commando Battery approached and attacked Darwin and Goose Green which the Argentine 12th Infantry Regiment were in possession of. A ferocious battle which lasted all night and part of the next day ended when the British forces had killed 47 Argentine soldiers and taken 961 Argentine troops prisoner. 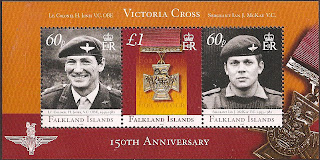 The British also suffered losses - 17 men were killed including the commanding officer of 2 Para, Lieutenant Colonel H. Jones, who died at the head of his battalion whilst charging the well-prepared Argentine positions. He was awarded the Victoria Cross posthumously for his role in the battle and both he, and Sergeant Ian J. McKay who won the VC a few days later at Mount Longden, were depicted on a set of 2 stamps and a miniature sheet which included the 2 stamps as well as a third which showed a Victoria Cross. The stamps were issued on 11 November 2006 to commemorate the 150th anniversary of the Victoria Cross and were designed by Andrew Robinson who has designed many Falkland Islands stamps in recent years. 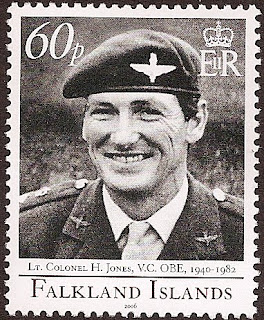 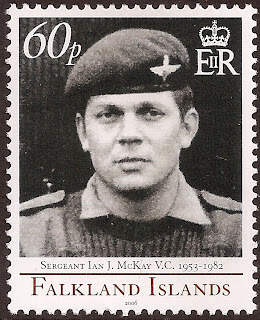 The British dead of the conflict were buried in a cemetery at San Carlos and the cemetery was depicted on one of two stamps issued by The Falkland Islands on 13 November 2002 to commemorate the Royal Visit to the islands of HRH The Duke Of York, Queen Elizabeth II's second oldest son, who had served as a helicopter pilot in the Falklands during the war with Argentina. 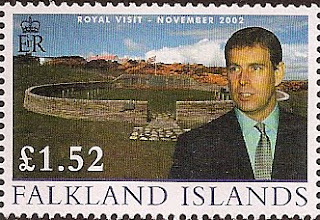 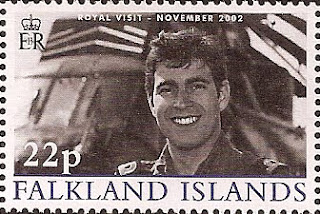 The cemetery was also depicted on one of 4 stamps issued on 29 January 1996 to commemorate the Royal Visit of HRH The Princess Royal, The Duke Of York's sister. 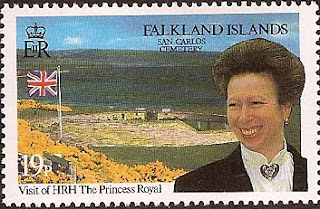 Another value from the set depicted the church at Goose Green. 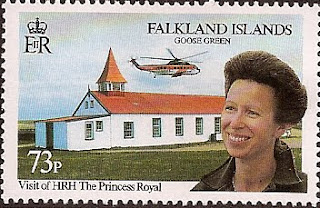 With the removal of the large Argentine force which had been situated at Goose Green, the British forces became able to move out of the San Carlos bridgehead.