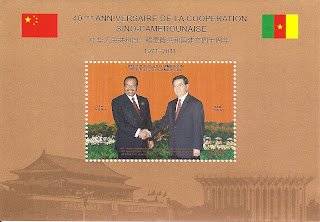 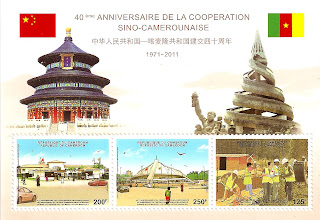 The governments of The Chinese People's Republic have always recognised the role of postage stamps in presentation of the image of the state and in publicising its friendly links with other countries. In recent years many countries have had stamps donated to them by the Chinese which have often marked anniversaries of the establishment of diplomatic relations between China and the state in question and, as recorded in a recent blog, the new country of South Sudan was presented by China with a set of three stamps which fulfilled the role of being South Sudan's first stamps; the stamps were produced in China in quantities of 100,000. Other Chinese adventures in producing stamps for a wide range of territories, including many Commonwealth members, occured when the 2008 Olympic Games were held in Beijing and, more recently, a number of sheetlets depicting peonies to coincide with an international stamp exhibition held in China. Some improbable territories were involved in the peony "omnibus" including The Isle Of Man Post Office although perhaps its participation is not so surprising given its woeful record of excessive stamp issues in the past few years - worthy (or, perhaps, unworthy) of mention is the dire set of stamps, just issued, which is linked to an inconsequential BBC television programme about motor cars which is presented by three immature middle aged men who often express boorish opinions and seem to be remarkably unworthy of commemoration by anything as prestigious as a postage stamp. What anyone in 100 years will make of The "Top Gear Challenge" stamps is anyone's guess, that's assuming that anyone will even know what a postage stamp was - it's unlikely that postage stamps will be in use then, I guess.

China's latest production for a foreign country is a set of 4 stamps and two miniature sheets produced for Campost, the post office of The Republic Of Cameroun/Cameroon, and commemorating the 40th anniversary of Sino-Camerounian co-operation. My correspondent tells me that the stamps should have been released in Cameroun on the actual anniversary of the contact between the two countries, 26 March 2011, but were delayed because of problems related to presenting the issue to the Camerounian president, Paul Biya, and eventually they were issued on 14 September 2011. They certainly look as though they were produced at The Beijing Printing House, having the typical perforation of perf. 12. I think that the Chinese are to be commended for understanding the useful role in international relations that postage stamps should still play and their productions are much more interesting than the rubbish that many Western countries produce for small territories who can not produce their own stamps. What possible relevance is Marilyn Monroe or The Three Stooges to a small West African republic? Yet these Western philatelic agencies continue to churn out the rubbish to make any profit they can out of the international reputations of these small states. At least the Chinese seem to be showing some respect for the territories they prepare stamps for and in doing so manage to boost the reputation and popularity of stamp collecting. Perhaps Royal Mail should consider emulating these partnership issues with other territories along the lines of the Chinese but I suppose they would not since the people who run the Royal mail stamp issuing policy seem only to be interested in immediate and short term financial profit and I guess that there is very little of that to be had in following the Chinese lead.
Posted by White Knight at 02:47