Jersey: The Deluge Continues in 2012. 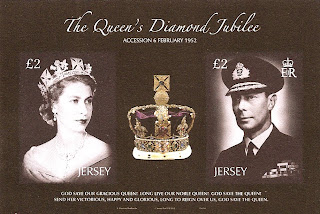 Having achieved 21st place in the 2010 list of the number of stamps issued by Commonwealth territories and in 2011 having released a remarkable 17 sets of stamps (78 stamps, 7 miniature sheets and a £14.22p "prestige booklet"), Jersey has now proudly announced that 2012 will see the island (population 91,533) issue a total of 14 sets of stamps with at least 7 miniature sheets and an inevitable prestige booklet. Issues include 2 sets to commemorate the diamond jubilee of Queen Elizabeth II, one being a very sombre miniature sheet containing 2 x £2 stamps, one featuring a photograph of the Queen and the other her father, King George VI, and issued on 6 February, the actual anniversary date of the king's death and the queen's succession. As well as the £4 miniature sheet, stamp collectors will also have the opportunity to part with a further £8 as the stamps will also be sold in sheetlets of four (two of each design). Ching! - the joyous sound of cash registers. Not satisfied with two royal issues, Jersey will also provide us with 4 stamps commemorating the 30th birthday of The Duke Of Cambridge and "depicting Prince William and other key members of the Royal Family", presumably if you are not depicted on this set of stamps, then you are not a "key member" of the family so there will probably be a few princes, princesses, dukes and duchesses around who will be miffed to find that they are not considered "key". Oh, the difficulties of devising a stamp new issue policy.

Jersey says it will also issue stamps on the subject of Europa (Visit Jersey), aviation (again), the sinking of The Titanic (what that has to do with the island of Jersey remains to be seen), birdlife (again), trees (again), "Jersey Moments" (your guess is as good as mine), butterflies (again), Jambo The Gorilla, coastal towers (again), "the 100th birthday of Charles Dickens" ( I think they mean 200th anniversary but after all, why be accurate as long as you can make lots of money from the stamps?) and "frosts and nature" mmm, thrilling. The one good thing that can be said about Jersey stamps is that, unlike The Isle Of Man, many of Jersey's stamps at least depict original art by artists who specialise in the subjects that they depict and do not mostly show photographs which have been vaguely altered on a computer to fit in a little bit of text. But we must ask ourselves, when will it all end? When will the golden goose drop dead at the feet of these greedy postal administrations and agencies? Meanwhile, the deluge of stamp issues from Jersey continues for another year.
Posted by White Knight at 01:56