1868. 🇬🇧 A Potted Philatelic Wars Of The Roses. 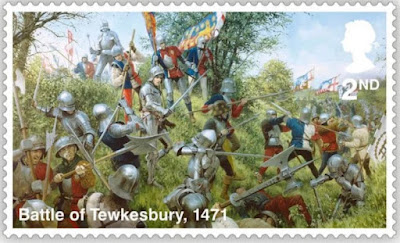 Since I was a small child, Ladybird books and Look And Learn magazine tucked under my arm, seeing (possibly inappropriately for my age given all the murders and executions in it) Shakespeare’s (and Olivier’s) Richard III on the family’s small black and white television and being a Warwickshire lad with English history all around me (our local parish church dates back to 1084 for a start) history has been my first love (well, dinosaurs were my very first love but when you think about it they are a sort of history or at least pre-history).

I loved the tales of Robin Hood and Good King Richard and Bad Prince John (admittedly more myth than history), thrilled to tales of the English Civil War (then I was definitely on the side of the Cavaliers) but most of all I loved to read about The Wars of The Roses, with the medieval glamour of knights in armour, kings rising and falling, battles spread across the English Midlands right up to Yorkshire, treachery, nasty uncles, cavalry charges and manipulative queens and that opening scene of it all, created by Shakespeare, of the feuding lords of the realm gathered in The Temple garden deciding whether to support the red rose of the Lancastrians or the white rose of the Yorkists. It was Star Wars and Game Of Thrones for my generation but the difference was that it was all real history. And who was my favourite historical character? As I wrote above, as a Warwickshire lad it had to be the infamous Warwick The Kingmaker (actually a Yorkshireman but we won’t mention that) who seated and unseated English kings almost from day to day. What adventure it was for a boy growing up in the 50s and 60s. As they say, you couldn’t make it up. I do have to admit that I was probably a little unusual as a seven or eight year old in having, or even knowing about, Richard Neville Earl of Warwick as my favourite historical character but there we are, we all have our eccentricities even in childhood.

Which brings me to Royal Mail’s latest set of stamps due to be issued on 4 May 2021. What joy this issue would have brought to me as a small boy - a fabulous depiction of the main battles of the Wars of The Roses, one on each stamp (though as a frequent visitor to Ludlow there is sadly no depiction of the Battle of Ludford Bridge fought on the edge of this magnificent medieval town, the capital of The Marches where the young Edward V was living until wicked uncle Richard Duke of Gloucester brought him back to London, shut him and his even younger brother up in the Tower of London and had them both murdered to secure his own place on the English throne as Richard III). Of course the set with a total face value of £11.52 would have been, even today a monstrous struggle to finance for a small boy, I should have had to rely on gifts for my birthday shortly afterwards and probably also a kind and generous aunt who always bought me a special set of stamps for my birthday to enable me to afford the set but the struggle would have been worth it - at last a set of of stamps commemorating the Wars of the Roses. I repeat, what joy it would have given me.

It all began with the seizure of the throne of England by Henry Bolingbroke, Duke of Lancaster, from the pathetic twerp Richard II in 1399 (we must not be too rude about Richard, it is said he did invent the handkerchief, an achievement of little significance to an 8 year old boy who realised that sleeves were invented before handkerchiefs). The problem was that Edward III, Richard II’s grandfather, had gone much further than having an heir and a spare and had far too many sons so that with the deposition of Richard II there was a general free-for-all of their heirs about who should really be king. When Henry V, Bolingbroke’s son, died at the unfortunate age of 35, he left a child just a few month’s old, yet another Henry, to succeed him. Factions at court, first held in check by the young king’s uncles, sprang up as time went by and the most powerful faction leader was Richard, Duke of York who thought he had a very good claim to be the occupier of the English throne himself. His main opponents were the Beaufort family, lead by Edmund Duke of Somerset, who supported Margaret of Anjou, the wife of the by now adult Henry VI so that the earliest struggles of the wars were more a Beaufort-York conflict than a Lancaster-York war. Inevitably  they all came to blows. It did not help that the king was weak and eventually went mad and was incapable of ruling and this gave no leadership which might have brought the two sides together.

So let the battles begin. It’s fitting purely from my own personal point of view and my interest in the period that the first battle of the wars should have been fought on 22 May (1455) as that’s my birthday. The first Battle of St Alban’s saw the king’s forces marching towards Leicester engaged by The Duke of York’s army supported by Warwick and his father The Earl of Salisbury inside the town of St Alban’s and the death of leading Lancastrians - the Duke of Somerset (who may well have been the real father of Margaret of Anjou’s child, Prince Edward of Westminster) and of the Earl of Northumberland and his son Lord Clifford as well as the king being wounded in the neck and escorted back to London by York. One battle and the plot is already giving Game Of Thrones a good run for its money. Really you couldn’t make it up.

One of the £2.55 stamps depicts the Battle of St Albans and what I take to be Warwick The Kingmaker as it is an armoured figure standing beside the banner of the Ragged Staff, the emblem of Warwickshire. So he’s finally made on to a stamp, my favourite childhood historical character. 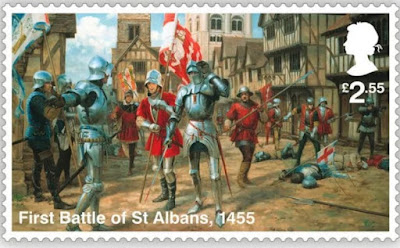 The Wars continued until 1487 when the ultimately triumphant Lancastrian heir, a Welshman called Henry Tudor, not then entirely secure on the throne as Henry VII, was forced to fight the Battle of Stoke against the Earl of Lincoln, yet another Plantagenet heir. In between 1455 and 1457 scores of aristocrats had died in battle or been executed by victorious rivals - Richard Duke of York after the Battle of Wakefield (1460), The Kingmaker (having changed sides a few times) at the Battle of Barnet (1471), the Lancastrian Prince of Wales (Margaret’s son) at the Battle of Tewkesbury on 4 May 1471 on what is now known as Bloody Meadow by Tewkesbury Abbey (this issue is released on the precise anniversary of that event which saw the end of the main Lancastrian hope to defeat the Yorkists until 1485/when Tudor defeated wicked Uncle Richard III at the Battle of Bosworth Field (famously in recent times his remains were unearthed under a modern day car park in Leicester and reburied with full ceremony in Leicester Cathedral which was not a bad outcome for a vicious child killer, regicide (he may well have killed Henry VI), despot and all-round bad egg (Shakespeare also portrayed him as having killed his wife Anne Neville, the Kingmaker’s daughter and young widow of the murdered Prince of Wales). 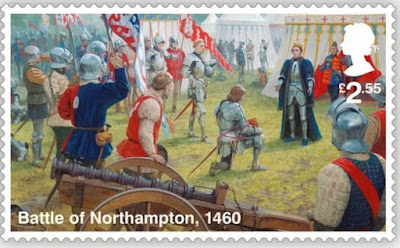 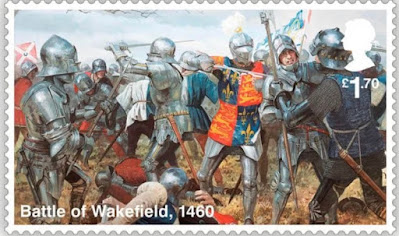 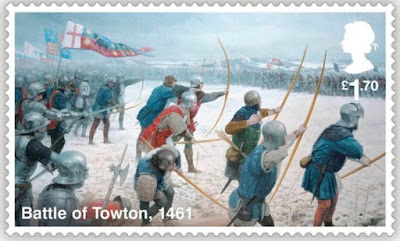 One day one side was up, the next day it was down. Edward the young Duke of York, after Richard York’s death, supported by Warwick, crushed the Lancastrians at the terrible and bloody Battle of Towton in Yorkshire, fought in a snow storm in 1461, and as a result Henry VI and Margaret with the Prince of Wales fled to Scotland. But Edward, now king, alienated Warwick by marrying Elizabeth Woodville who brought with her the baggage of her rather worthless family who began to take over The Kingmaker’s former power in the realm and in 1470 he changed sides and reinstalled Henry VI as king. Edward soon returned to England and met Warwick at Barnet in 1471 where the Kingmaker proved to have played his last roll of the dice and shortly afterwards Edward cemented his kingship at Tewkesbury, until his death in 1483, by arranging the murder of Henry VI in the Tower. 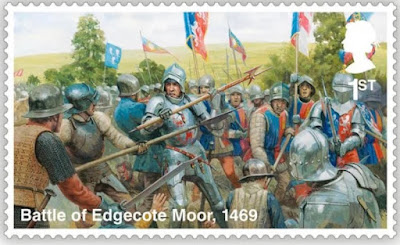 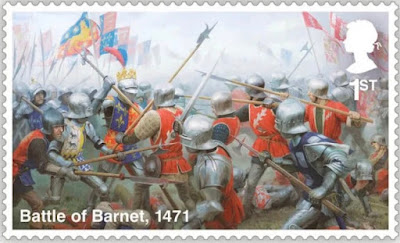 The final chapter was then written with the 2 year reign of Richard III culminating in his death at Bosworth uttering (or maybe not) the famous words from the play, “A horse, a horse, my kingdom for a horse” as the Lancastrians closed in on him and did him to death. And so we had the Tudors and that’s a whole brand new story. 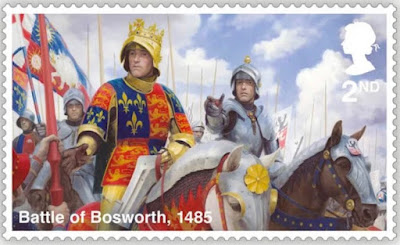 Some of the actors in this 32 year long drama have been depicted on stamps before, including issues released by Royal Mail. An issue of 2008 depicted the English kings of the Houses of Lancaster and York including Henry IV whose deposition of Richard II served as a prelude to the Wars, and then poor, pathetic  Henry VI (who was the only English king ever to have a coronation in France as the king of that country as well as England, not that it did him much good - he seemed to have inherited the madness of his French royal grandfather), Edward IV, the poor murdered youth Edward V and his wicked uncle Richard III. The set also included a depiction of the Battle of Tewkesbury on one of the stamps in the accompanying miniature sheet. The following year a set was released depicting the Tudor monarchs and so Henry VII, victor of Bosworth, made his appearance on a British stamp and we must not forget Henry VIII in the same set whose insecurity about the future of his dynasty resulted in yet a few more Plantagenets losing their heads and the whole drama surrounding his various marriages aimed at securing a male heir and the rise of the Church of England and the severance of the country’s links with the Roman Church. 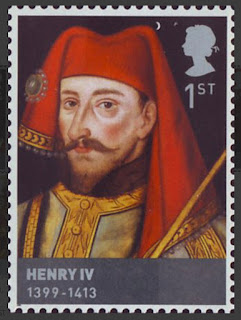 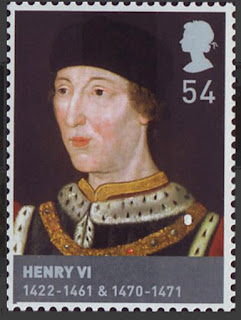 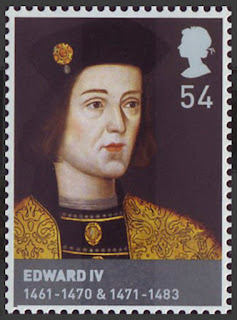 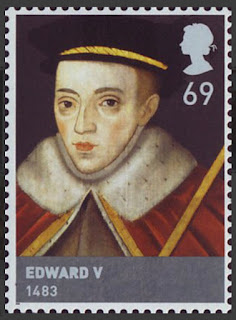 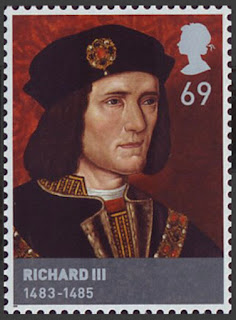 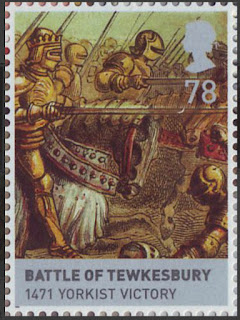 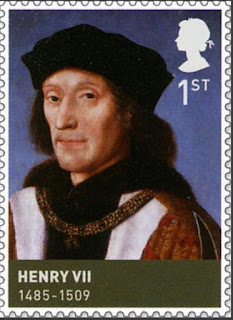 I can not think of any other players in this drama who have made an appearance on a postage stamp apart from the unfortunate Anne Neville, the Kingmaker’s daughter, who was first married to the rather unpleasant (some say), young Lancastrian Prince of Wales who was killed at Tewkesbury and afterwards to Richard III who (Shakespeare alleged) murdered her. 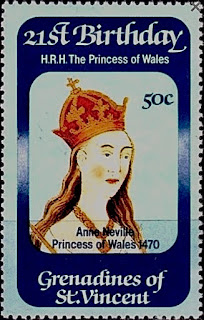 A set of stamps on the subject of ‘Battles’ was issued in 2010 by British Indian Ocean Territory and one of the values purported to portray the Battle of Bosworth. 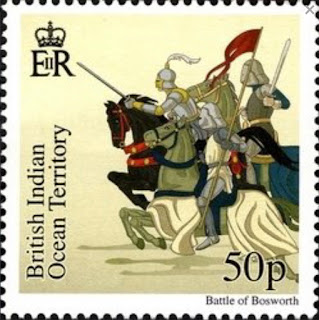 This wonderful new set of stamps from Royal Mail which commemorates a significant anniversary in the history of England was designed by Royal Mail Group Ltd using superb artwork by Graham Turner (just look at the Battle of Bosworth stamp and look at the depiction of Richard III’s face, Turner has clearly used the reconstruction of the king’s face made after his bones were discovered as a basis for his mini-portrait; what an effort Turner has put into making his designs as accurate as possible). The issue was lithographed by International Security Printers and the stamps are perforated 14. A great issue certainly from my point of view and therefore rated ******.

So, I don’t always moan about Royal Mail new issues but I’m not sure that an enthusiastic schoolboy would be able to afford this set.