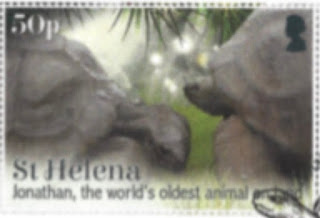 🇸🇭 The St Helena postal service appears to have come up with the first Christmas stamps of 2019. The set of 4 stamps is also the first stamp issue of the year from St Helena. The subject featured is rather an unusual one for the Christmas season - the theme of the set being ‘Jonathan, the world’s oldest animal on land’, the said Jonathan being a Seychelles giant tortoise who was brought to St Helena in 1882 at the age of about 50 and given his name by the island’s then governor, Sir Spencer Davis. Jonathan lives in the grounds of Plantation House, the home of the Governors of St Helena.
While Jonathan undoubtedly has earned an appearance on a set of stamps his longevity pales into insignificance when compared with the longest lived animals in the sea - Glass sponges which are found in the East China Sea and the Southern Ocean have been discovered to live up to 10,000 years. I haven’t found a stamp from a Commonwealth country which depicts these phenomenal creatures but there must one out there somewhere. Failing that there may be a stamp which depicts the black coral, Leiopathes Glaberrima, which Wikipedia tells us lives to around 4265 years.
The mollusc, Arctica Islandica, known as the Ocean Quahog, has been shown to live over 400 years with one, named Ming, being shown to have lived to the age of 507 years until it was dredged up by a research vessel. Poor old Ming.
Back to the Jonathan stamps - I believe that the date of issue was 2 September 2019 - Rating:- ****. 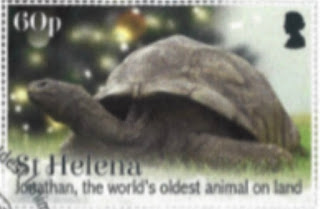 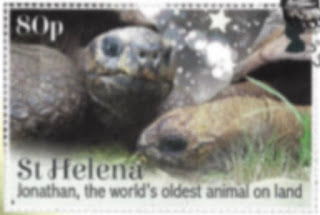 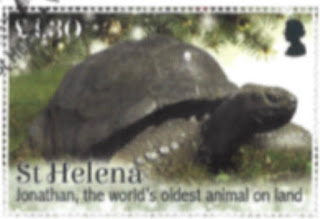 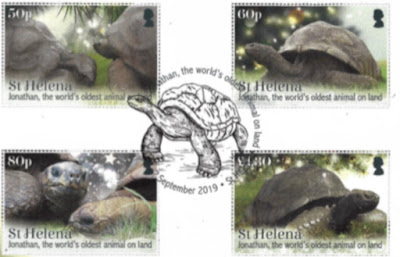 🇯🇪  The real Post and Go stamp to be issued by Jersey Post (see Blog 1512) to commemorate the holding of the PostEurop Plenary Session in St Helier is now illustrated below:-

While Royal Mail has seen fit to commemorate the highly significant literary anniversary - the 20th anniversary of the publication of The Gruffalo (note the hint of sarcasm) - it has chosen to leave without philatelic commemoration at least two other notable British literary anniversaries of 2019 - the Tercentenary of the publication of Daniel Defoe’s Robinson Crusoe and the Bicentenary of the birth of Mary Ann Evans who wrote her distinguished novels under the pen name of George Eliot in the hope that the public of the time would be more likely to buy novels written by a man than by a woman. Maybe Royal Mail will paint a postbox in the town of her birth, Nuneaton in north Warwickshire, in her honour.
Meanwhile Jersey Post, always on the lookout for a subject to feature on one of its numerous stamp issues, has discovered that Mary Anne Evans spent three months staying in Jersey in the summer of 1857 and this fact has provided it with a marvellous excuse to issue a stamp to honour her anniversary. Indeed Jersey Post has come up with some excellent and original designs based on artwork by a Jersey local artist, Peter Fancourt, which depict scenes of the island as they would have appeared when Evans/Eliot was actually visiting the island including interpretations based on her descriptions of her visit. Quotations by Eliot are also part of the stamp design.
The connection of Eliot with Jersey is a little tentative but this is an excellent little set and makes up for Royal Mail’s failure to commemorate this notable woman. Defoe and Eliot may have made way for Marvel and The Gruffalo as far as Royal Mail is concerned but Jersey Post has risen to the occasion for George Eliot at least.
Rating:- *****. 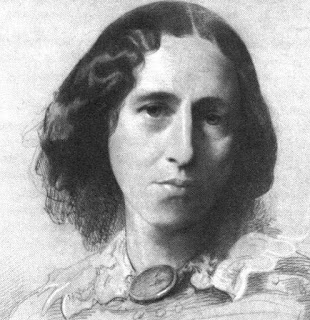 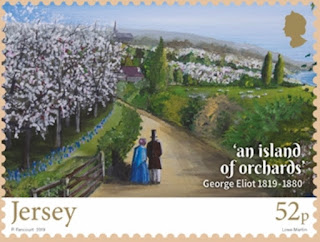 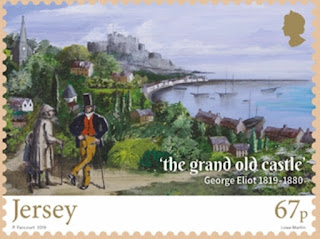 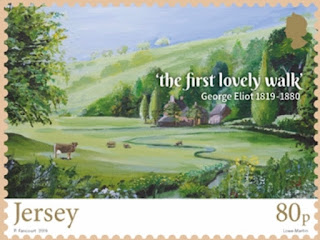 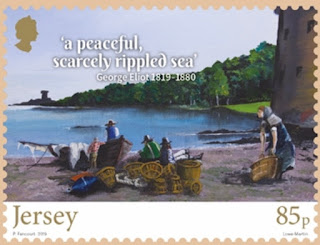 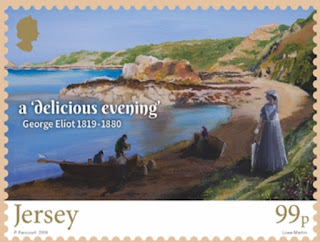 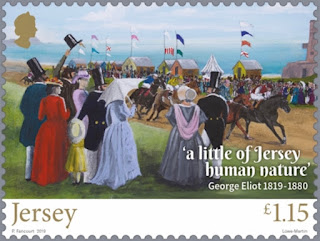