1176. 🇬🇲 The Gambia Rejoins The Commonwealth. 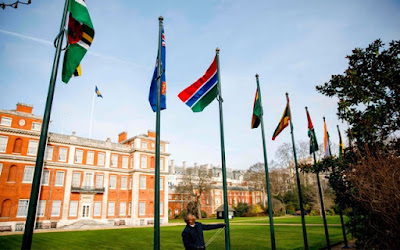 🇬🇲 The Gambia was readmitted to membership of The Commonwealth on 8 February 2018 after the democratic election in the country in December 2016 had led to the eventual removal of the tyrant Yahya Jammeh and his replacement by Adama Barrow in January 2017. The vicious Jammeh had withdrawn The Gambia from its Commonwealth membership on 2 October 2013 when he had announced pre-emptively that The Gambia "would never be a member of a neo-colonial institution" fearing that his despotic behaviour would lead to humiliating criticism at the 2013 Commonwealth Heads of Government Meeting (CHOGM) which was held in Sri Lanka. Now President Barrow will be able to attend the next CHOGM to be held in April this year in London and Windsor after the unanimous vote by the 52 Commonwealth heads of government to readmit The Gambia to membership of the Commonwealth family. A flag raising ceremony was held at Marlborough House, headquarters of the Commonwealth Secretariat to mark The Gambia's readmission to the organisation.
There are now again 53 members of The Commonwealth which represent a population of 2.4 billion people.
The Gambia's readmission to The Commonwealth is not necessarily good news for collectors of Commonwealth stamps since the country's postal service continues to allow the notorious IGPC to issue numerous stamps on its behalf, many of which are on subjects which have no relevance to The Gambia itself. It seems to be much more difficult to get rid of exploitative philatelic agencies than it does to depose murderous tyrants.
See also Blogs 310, 586, 906 and 940. I shall once more list issues of The Gambia released on or after 8 February 2018. 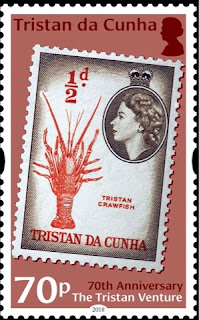 🇸🇭 Time and time again Creative Direction/Pobjoy Stamps come up with great issues for their client territories which tell the stories of those islands they serve, or for that matter - the big blocks of ice. And here's another such issue....
The postal service of Tristan Da Cunha will issue a set of 4 stamps and 1 miniature sheet on 12 March 2018 to commemorate the 70th anniversary of the Tristan Venture, a fishing industry scientific survey expedition which took place on Tristan in 1948 to explore the practicality of establishing a fishing industry on Tristan. The 45p value depicts the Rev CP Laurence who conceived and put forward the idea of establishing a viable fishing industry for Tristan Da Cunha.
The expedition confirmed the viability of setting up such an industry and the island's economy was transformed by the outcome. The new industry identified by the expedition centred on fishing the Tristan crayfish which was to be depicted eventually on an early halfpenny stamp from Tristan which in turn is depicted on the 70p value of this set.
The issue was designed by Andrew Robinson and lithographed by Cartor and perforated 13.5. Rating:- *****. 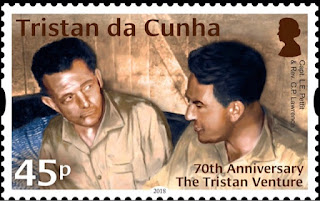 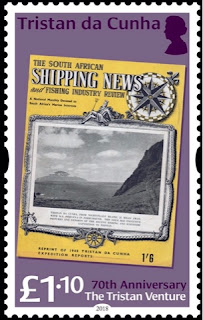 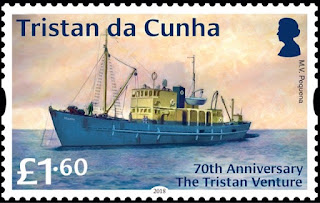 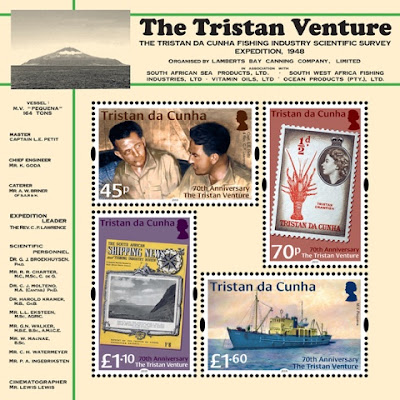