🇳🇿 New Zealand Post is very good at reacting to notable events occurring in the country with the issue of a philatelic commemoration of the event soon after it has occurred. The latest such issue is a miniature sheet released on 25 January 2018 which commemorates the launch of the first New Zealand rocket, Rocket Lab's Electron, into space from the Mahia Peninsula. The sheet contains 6 different stamps and was designed by Saint Andrew Matautia and Sam Taylor. The issue was lithographed by Collectables and Solutions Centre in Whanganui and perforated 13.5.
New Zealand's entry into the group of nations which have launched space vehicles is a worthy commemoration and proves that, despite what Royal Mail may say, a notable event can be commemorated soon after it has taken place and a new issue does not have to take 1 to 2 years to prepare. True, Royal Mail, laughing all the way to the bank following its enormous profits garnered from its Game Of Thrones and Star War issues, could not really care about such trivialities as commemorating notable national achievements or events (unless they're to do with Pop Culture or weddings of popular young members of the Royal Family, both enormous potential money spinners) but New Zealand Post is miles ahead with its preparedness to note what's happening in the country at that moment and should be praised for doing so.
Stamp issue rating:- *****. 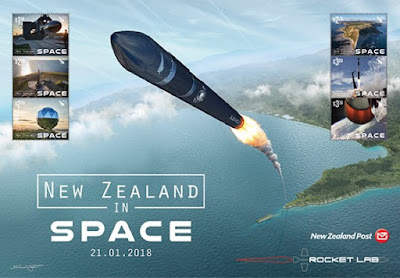 🇬🇧 Depicted below are two versions of the Royal Mail Game Of Thrones Post and Go stamps from the IAR kiosk MOO2 kiosk at Mount Pleasant Enquiry Office (lower illustration) and an NCR kiosk (upper illustration) to contrast the two types. 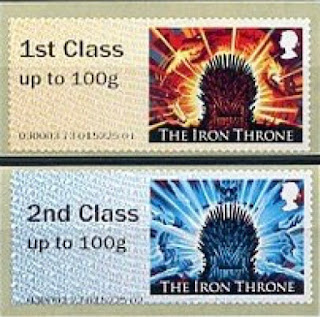 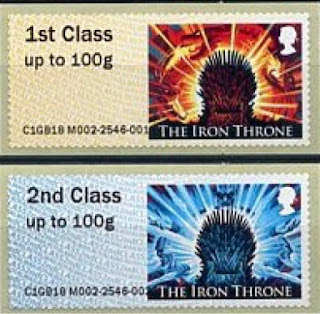 🇬🇮 Meanwhile the Royal Gibraltar Post Office has announced that it will issue a new Post and Go stamp on 14 February 2018 at Spring Stampex 2018 with a design to commemorate the Chinese New Year - the Year of The Dog. Presumably these stamps will also be sold locally with additional inscriptions for the Main Post Office and Parcel Office in Gibraltar itself.
Kiosk GI01 at Stampex will also dispense the current Masonic Post and Go issue of 6 different stamps with the added inscription- "Happy Valentine's - Spring Stampex 2018" and a depiction of a Heart. I presume that the sloppy "Happy Valentine's" inscription is referring to St. Valentine's Day.
Rating:- 0.
Illustrations are awaited.

🇨🇦 A number of new issues have been announced by Canada Post. A set of 5 self-adhesive stamps sold in booklets of 10 (2 x 5) was issued on 24 January 2018 on the subject of Winter sports champions. This no doubt is designed to coincide with the upcoming Winter Olympic Games in Korea but by not mentioning the Games on the stamps a lot of money is saved in royalties. As one might expect in this era of Equality, the stamps entirely depict female champions and were designed by Subplot Design Inc. Rating:- ***. 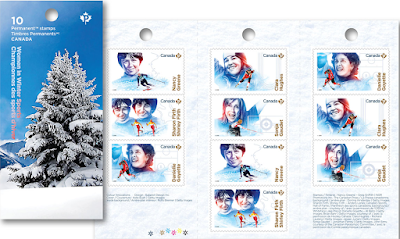 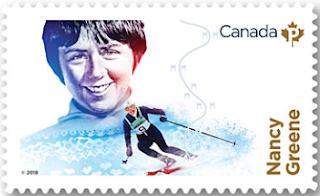 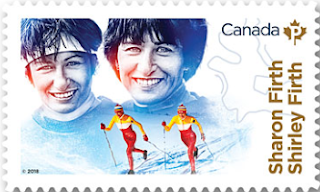 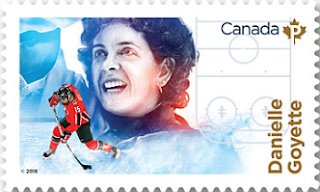 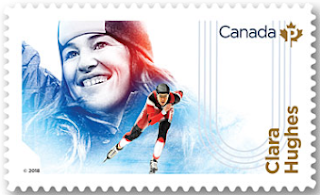 On 1 February 2018 Canada Post will then issue 2 stamps in its 'Black History' series. Both are self-adhesive and sold in booklets of 10. One stamp commemorates the Centenary of the birth of Kay Livingstone, a radio celebrity also recognised as a humanitarian devoted to the emancipation of black women in Canada. The second stamp commemorates the late Lincoln Alexander who was an important campaigner for Black rights and equality and was such an important figure in modern Canadian history that 21 January is now celebrated throughout Canada as Lincoln Alexander Day.
Both of the above dignified and restrained stamps were designed by TÉTRO. Rating:- ****. 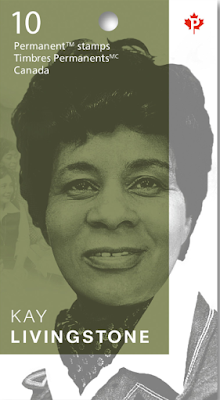 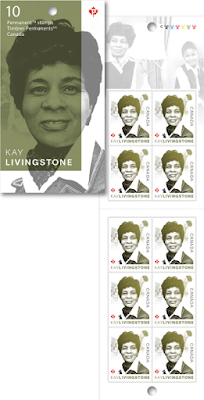 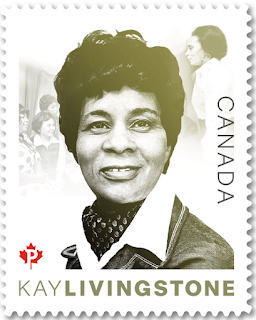 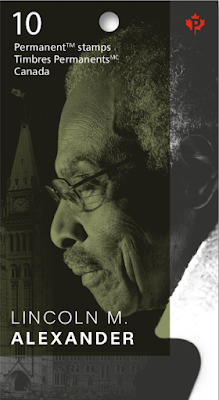 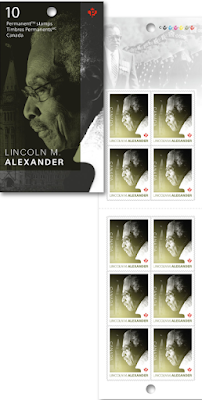 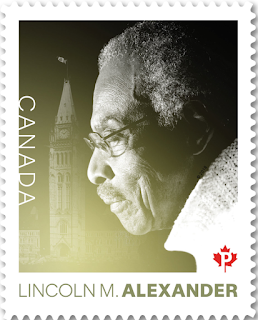 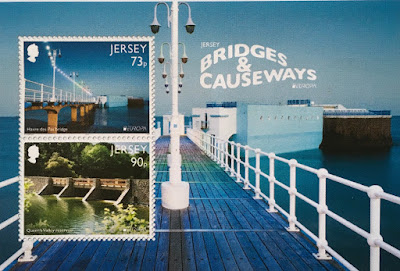 🇱🇹 This week's products from Stamperija which have the name of a Commonwealth country printed on them are inscribed 'Sierra Leone". The 'issue' is made up of the usual 10 'sheetlets' each containing 4 different 'stamps' and 10 accompanying 'miniature sheets' and the featured subjects are:- Bats, the First solar powered train, Killer whales, 'A Tribute to Richard Gordon' (US Astronaut), Kingfishers, Indigo birds, Hippopotami, Hyenas, Dolphins and Cuckoos. The stated date of issue is 29 December 2017. There is little. Point in wasting time and energy in providing illustrations of these paraphilatelic products as they are very similar to those depicted in Blog 1164. Rating:- 0.
Posted by White Knight at 08:41