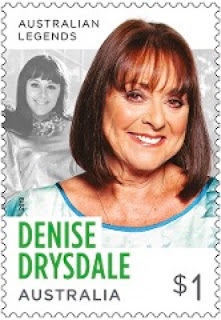 🇦🇺 Australia Post's latest 'Australian Legends' set is on the subject of 'Legends of Television Entertainment' and is made up of 5 gummed stamps and 5 self-adhesive stamps from 5 different booklets each of 10 stamps and each sold for $10. I do not recognise any of the 'Legends' depicted and I assume that this issue celebrates people of local national rather than international interest. The set, designed by Jason Watts, was released on 18 January 2018. Rating:- *. 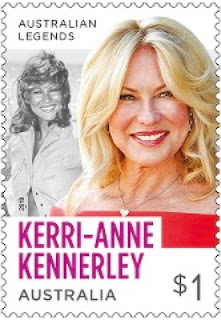 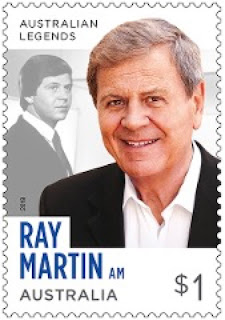 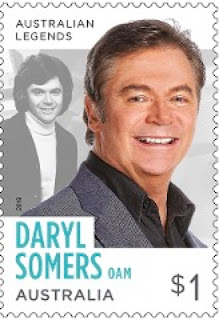 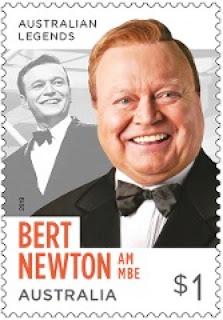 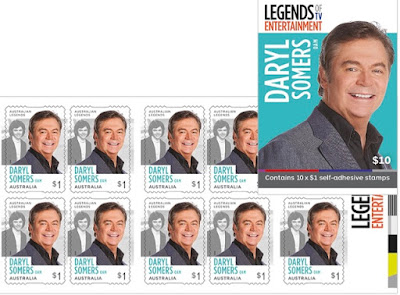 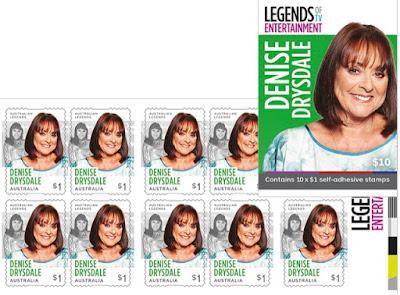 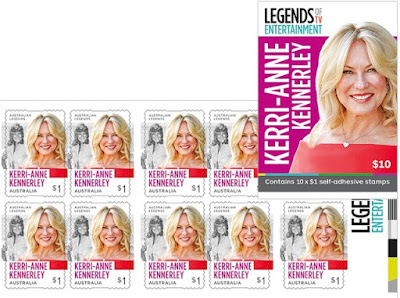 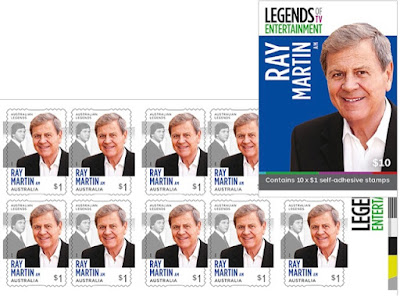 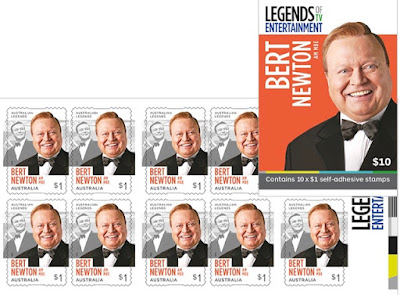 🇳🇿 New Zealand Post will issue an excellent set of 6 stamps and 1 miniature sheet on the subject of New Zealand Cycle Trails on 7 February 2018. The issue was designed by Strategy Creative of Wellington and lithographed by Southern Colour Print and perforated 14.5 x 14. I like this set very much even if it is mainly designed by placing lettering on a photograph and nothing much more - the photographs are so well chosen that one can hardly object. Rating:- *****. 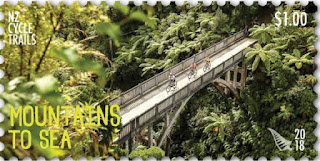 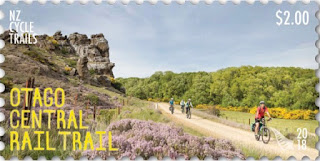 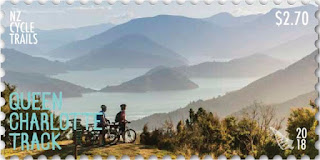 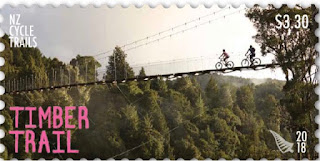 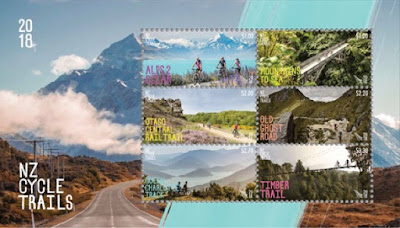 🇬🇮 Meanwhile the Royal Gibraltar Post Office insists on continuing to release its annual Chinese new year stamps. Two se-tenant for a total of 4 pounds. Although the issue commemorates the Year of The Dog the creature depicted looks less like a dog and more like a Komodo dragon. The issue will be released at the end of January 2018. Rating:- *. 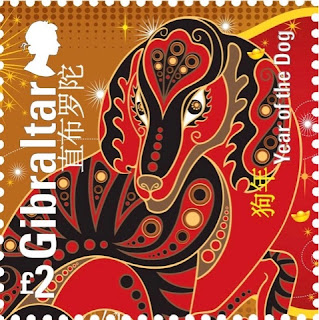 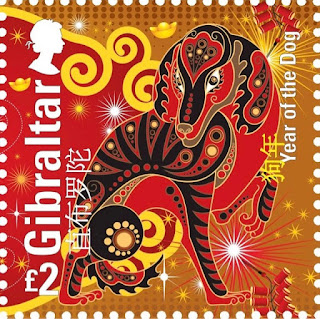 🇸🇧 Some new issues from Stamperija which are not typical of that agency's products and which may actually be on sale in local post offices for use on real mail. From Solomon Islands comes a miniature sheet containing 8 different stamps to commemorate the 75th anniversary of the Battle of Guadalcanal which was fought in The Solomon Islands. This item is accompanied by a single stamp miniature sheet. Rating:- ****. 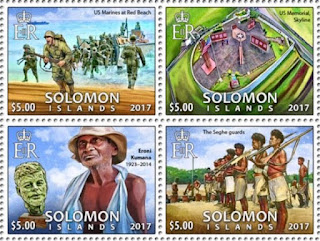 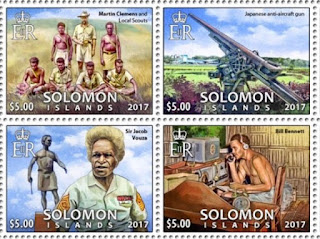 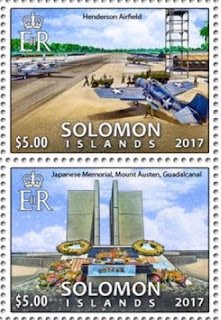 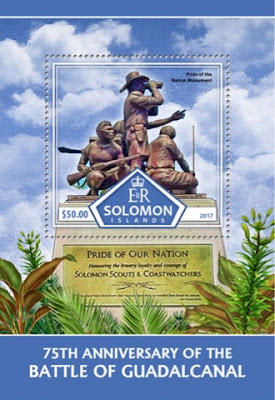 Also from Solomon Islands is a set of 4 stamps which commemorates the 20th anniversary of Solomon Post. This again looks like a set which might be sold at local post office counters and as such is attractive but I note that a number of issues have appeared this week from various Stamperija client territories including Togo, Djibouti and Central African Republic and one must be a little suspicious that Stamperija has discovered that collectors are willing to buy stamps which look like local issues rather than the usual sheetlets and miniature sheets which it Issues normally and, in order to boost sales, have begun to issue such items without them being any more available in its client territories than is the usual stuff. It is notable that all these products are also sold with imperforate variants and an issue from The Central African Republic is rather suspect - it's seems unlikely to me that the country would want to commemorate the 40th anniversary of the Coronation of the monstrous dictator, the self-proclaimed Emperor Bokassa, but such an issue has indeed appeared among these 'local issues' which Stamperija has put out. As always, with anything coming from Stamperija, caveat emptor. 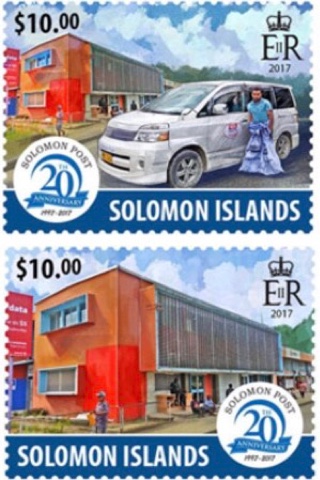 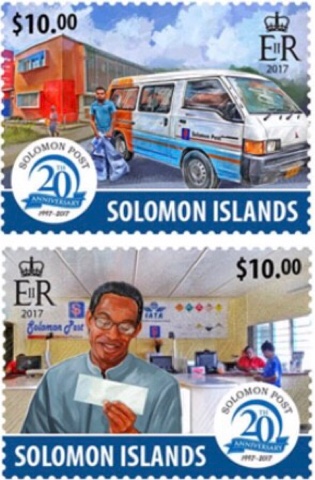 🇲🇻 Similarly we have a sheetlet of 8 different stamps which has been issued by Maldives Post, another client postal administration of Stamperija, and which is part of a joint issue with the Japanese postal service. Just as with the Solomon Islands issue I do not know the date of issue of this item. Although Maldives has left The Commonwealth I do like to keep an eye on what is appearing from the Republic in case it rejoins the organisation eventually and to take note of such items as this which might actually have been available in the country. Rating:- ***. 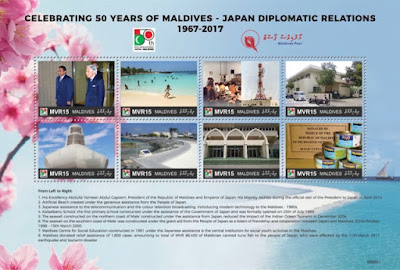 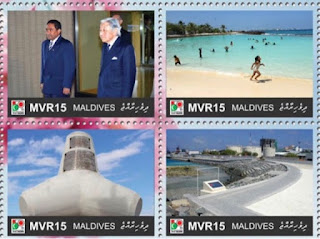 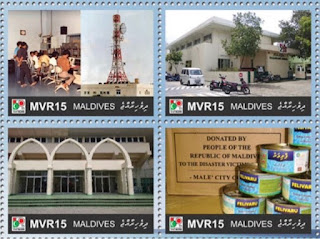 🇱🇹 No doubt about the nature of the latest products from Stamperija, those which have the name of Sierra Leone printed on them and which are stated to have been released on 29 December 2017. These look very much as though they are unlikely to have ever made their way to ordinary post office counters in Sierra Leone. As usual there are 10 sheetlets, each containing 4 different stamps, and 10 accompanying miniature sheets. The subjects featured this time are related to wildlife - Doves, Lizards, Butterflies, Hawks, Elephants, the Red River Hog, Manatees, Primates, Leopards and Owls. Rating:- 0. 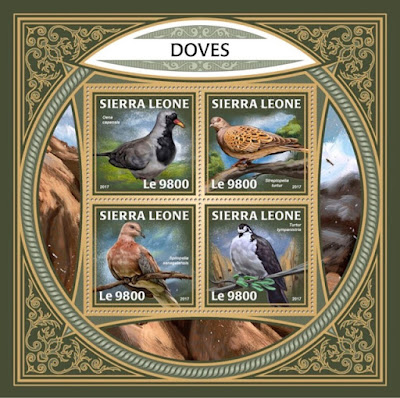 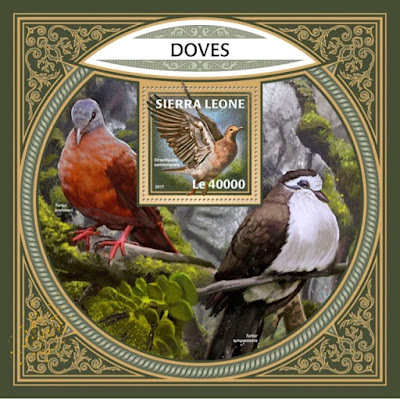