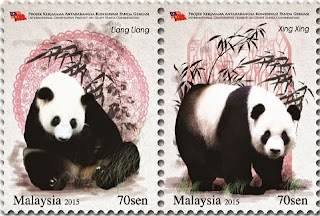 Pos Malaysia will issue 2 stamps and 1 miniature sheet on 25 February 2015 to commemorate the International Co-operative Project on Giant Panda Conservation being carried out by Malaysia and The People's Republic of China. This is a lovely issue and I will be delighted to add it to my collection. Malaysia seems at the top of its game at the moment in terms of issuing interesting and attractive new issues. I also very much like the 3 Farm Animals stamps which were issued on 16 February 2015 (depicted below) which were accompanied by 2 miniature sheets - 1 ordinary sheet depicting a domestic goat and a second Rm 15 sheet printed on wood to fit in with the Lunar New Year - the Year of the Wood Goat. Again, another interesting and attractive issue:- 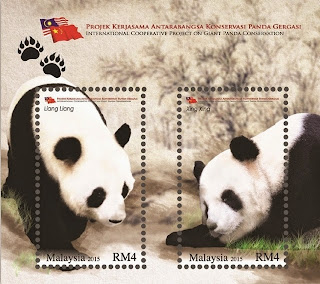 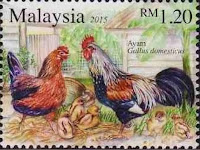 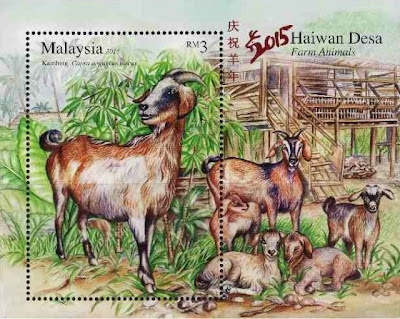 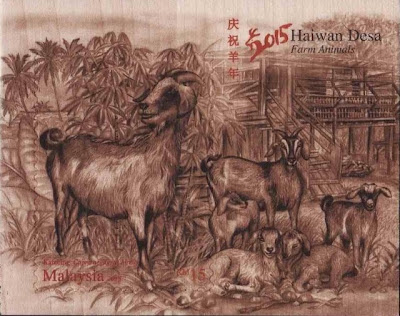 Another interesting recent issue was the miniature sheet issued by Pos Malaysia on 1 December 2014 which contained a Rm 50 stamp which was printed as 22k gold on copper (see Blog 512) but I was not aware that this was accompanied by a similar miniature sheet, face value Rm 35, with the main stamp design produced in an embroidered form. This may be a little gimmicky but it is still a very attractive miniature sheet. For other recent Malaysian new issues see Blogs 511 and 517. I think that Malaysia is producing some wonderful stamp issues at present and they are a great pleasure to collect:- 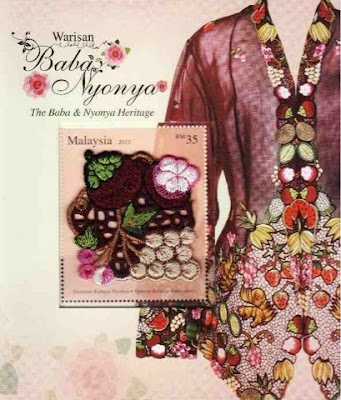 Singapore Post issued 6 new definitive stamps on 26 November 2014 - four values made up the second part of the Vanishing Trades set and two stamps were new values of the Past Street Scenes definitive series. A Collectors' Sheet, sold for $28, featuring all the Past Street Scenes stamps issued so far was also released as was a second Collectors' Sheet which contained all 14 Vanishing Trades stamps and was sold for $12.80c. The stamps were designed by Ms. Lim An-ling:- 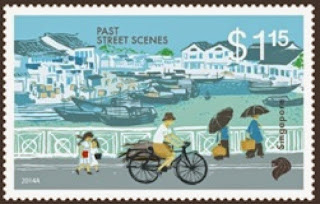 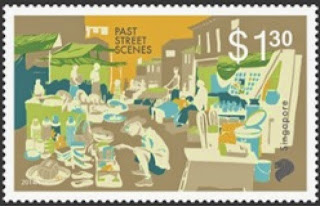 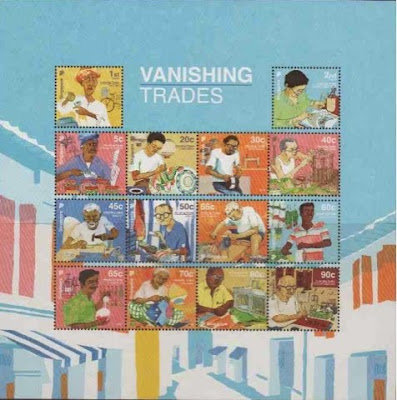 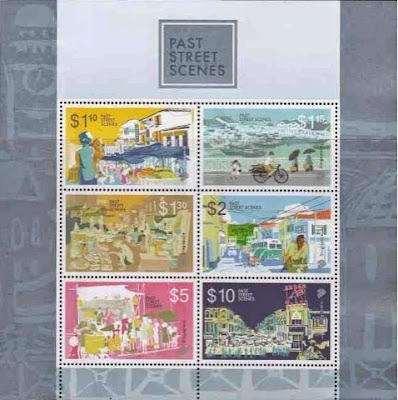 The postal service of The Turkish Republic of Northern Cyprus issued 4 very attractive stamps on 19 September 2014 on the subject of fruit tree blossoms. The set was designed by Gorel Korol Sonmezer and Huseyin Billur and was printed in lithography by the State Printing Works, Lefkosa:- 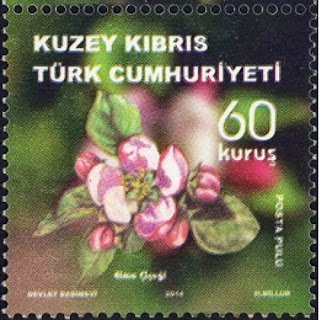 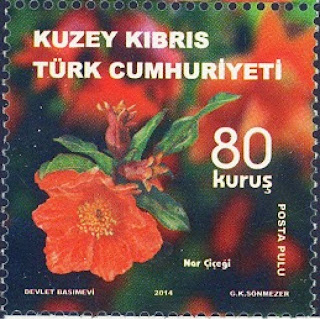 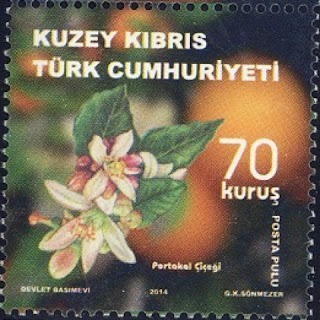 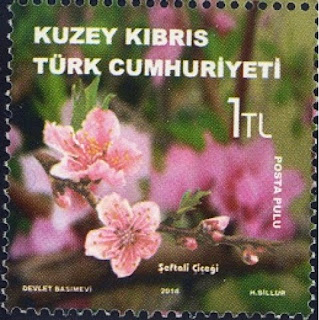 The Malawi Post Corporation issued a set of 5 stamps and 1 miniature sheet to commemorate Christmas 2014. I do not yet know the date of issue of this set. The central theme of the issue seems to be that of the Christmas tree:- 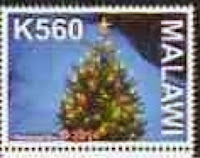 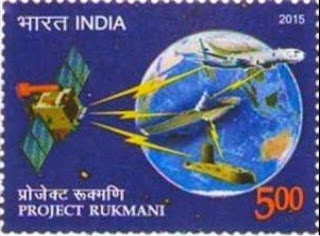 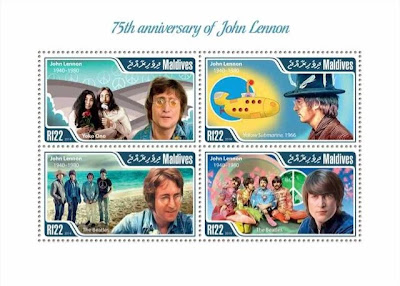 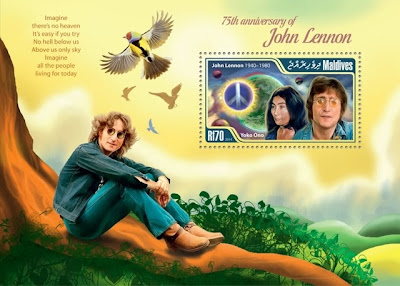 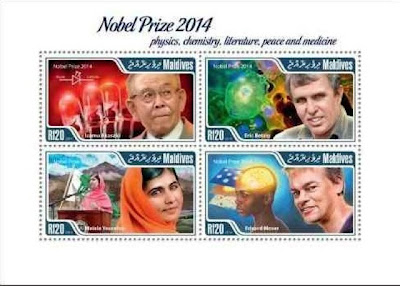 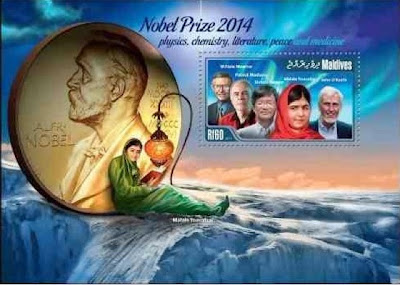 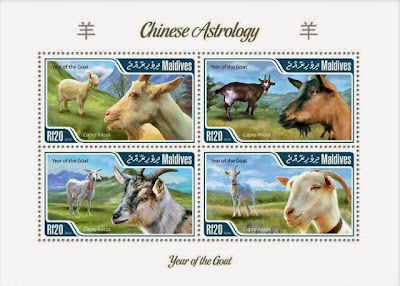 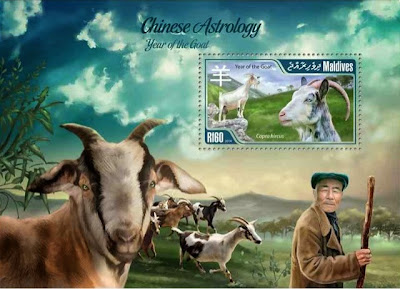