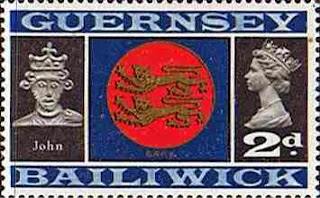 2014 is to be an important year for unpleasant former English kings. Firstly, the funeral of the monstrous Richard III will take place at Leicester Cathedral on 26 March 2015 (see Blog 437) and then attention moves to the worst of them all, Bad King John, when the 800th anniversary of his consenting to the Magna Carta will be commemorated.
Royal Mail has wisely decided not to commemorate the funeral of the murderous Richard III although, as mentioned in Blog 437, he has been featured previously on a British stamp but the main British postal service will release a set of stamps on 7 June 2015 to commemorate Magna Carta. I do not know whether King John will feature in any of the designs of the stamps in the set but as many other murderous, villainous and, sometimes, inconsequential monarchs have been depicted on British stamps I hope that John will indeed make his first appearance in my British stamp collection.
John was born in Oxford on Christmas Eve 1167 as the youngest son of King Henry II and Eleanor of Aquitaine. With three much older brothers, it appeared unlikely that John would succeed to a significant inheritance and he was known as John Lackland.
However he succeeded his brother, Richard I, to the throne of England in 1199. He also became ruler of the "Angevin Empire" - about one third of France (see Blog of 4 July 2010) - but his nephew. Arthur, rebelled against him in an attempt to take over the territories in France. Arthur was captured and was killed possibly by John himself in 1203.
Subsequently John lost Normandy and the Angevin territories to the French and John failed to recover them. John fell out with the Pope, Innocent III, over the appointment of a new Archbishop of Canterbury so that the Pope eventually placed England under an interdict in 1208 and John eventually submitted to Innocent III in 1213 and agreed to England becoming a Papal Fief.
With the various attempts to recover the territories in France, John implemented a fiscally harsh regime in England and civil war began as the barons opposed his actions. John lost control of London to the rebels on 17 May 1215 and was forced to give assent to the demands of the rebel lords in the Magna Carta at Runnymede on 15 June 1215. The terms of Magna Carta were so extreme that John gained fresh support and was able to restart the civil war against the rebel lords and the the barons invited the French Dauphin to come over to England and take the throne from John. However the king died of natural causes on 19 October 2016 having lost the crown jewels while crossing The Wash a few days earlier and was buried in Worcester Cathedral and succeeded by his nine year old son, Henry III.
John has made a number of previous appearances on Commonwealth stamps and depicted above is the only contemporary portrait of him which takes the form of a depiction on an English coin. The coin appeared on the 2d value of the first Guernsey definitive series which was issued on 1 October 1969 and designed by Richard Grainger-Barrett and printed in photogravure by Harrison. 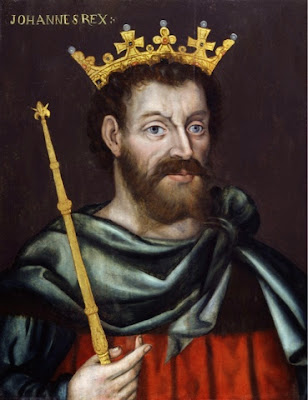 The above painting of King John which is in the National Portrait Gallery was reproduced on a stamp issued by Jersey on 25 June 2004 to commemorate the 800th anniversary of Jersey's status as a Royal Peculiar. The stamp was issued as a se-tenant pair with a picture by Victor Ambrus of Mont Orgueil Castle in the 13th century:-

The same portrait was also used on one value of a set of 8 stamps depicting British monarchs issued by Solomon Islands on 24 April 2010. The issue does not appear to have commemorated any particular event or anniversary and was effectively nothing more than a catchpenny issue from a country which did not become part of the British Empire until 700 years after the reign of King John;-

I have one other philatelic item in my collection which depicts the same portrait of King John. The item is a cover with a "silk " illustration of the king with a contemporary 8p Machin Head definitive and a souvenir "WINDSOR BERKS" postmark dated 15 JUN 1978 (the anniversary of John's assent to Magna Carta). This cover was one of a series, each depicting a portrait of a different English monarch from William I to Elizabeth II, which was privately produced by the dealer Henry Murray to commemorate the 25th anniversary of the coronation of Queen Elizabeth II. An edition of 1500 of each cover was produced and they were sold with a special album to house them. It provides an interesting collection of portraits and relevant postmarks although there is one startling error in the set - the portrait used on the Henry IV cover does not depict Henry Bolingbroke but instead features in error a portrait of Henry IV of France! 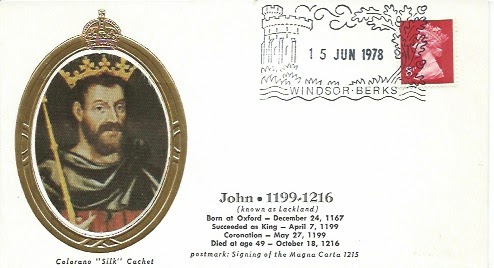 An imaginative portrait of John was used for the design of the seventh stamp of the Kings and Queens series of stamps which was issued by Barbuda on 15 May 1970. The portrait is based on the effigy on John's tomb in Worcester Cathedral:-

Gibraltar depicted John on one of 2 stamps issued on 26 August 1968 to commemorate Human Rights Year. Famously, the stamp depicted an error by the designer, Alfred Ryman, because it showed John with a large quill pen in his hand suggesting that he signed Magna Carta whilst he did in face give his consent to the charter not by signing it but by applying his seal to it:- 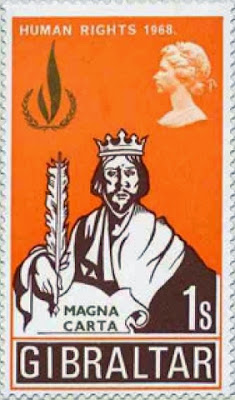 Tristan Da Cunha released one stamp on 24 April 2011 which was part of a set of 8 stamps which made up its "British History Part 3" issue. The stamp depicted King John examining Magna Carta with his barons looking on:-

A commemoration of Magna Carta was the subject of one of the stamps which made up the 7th issue of the Royal Mail Millennium series of 1999. This part was released on 6 July 1999 and showed an unexciting work by Alan Kitching called "First Rights". The design highlighted a modern interpretation of the rights granted by John in the Magna Carta:- 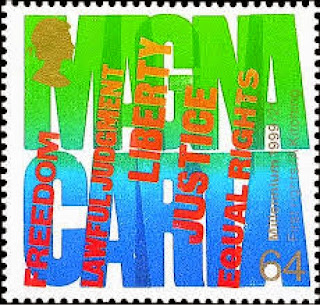 As noted above, John died on 19 October 1216 and was buried in Worcester Cathedral which was depicted on a Universal Mail United Kingdom Airmail Postcard stamp (UK0048) issued in 2012 (see Blog of 29 September 2012):- 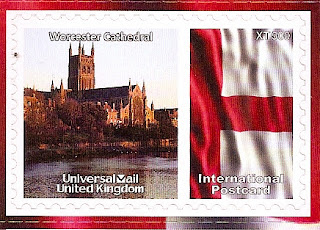 Finally, no-one can be all bad and, being a great dog enthusiast, I find the picture illustrated below reassures me that even King John might have had a fraction of kindness inside him. The illustration from a royal manuscript of c.1307 - 27 in the British Library shows the king stroking affectionately one of his dogs while another sits trustingly beside him - as I say - King John must have had a little crumb of kindness in him even if it was reserved for his dogs:- 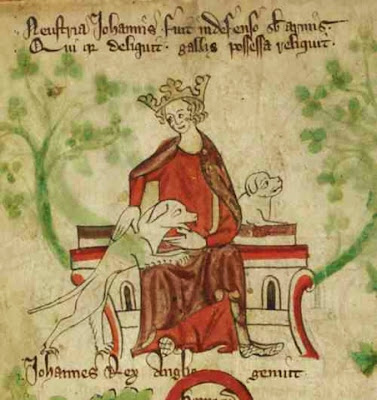