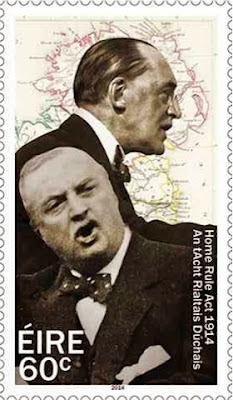 On 22 May 2014, the postal administration of Ireland, An Post, issued the latest stamp in its exciting ongoing series which features the events and personalities involved in the run up to the 1916 Easter Uprising (see Blog 398).
The latest stamp commemorates the centenary of the passing by the British Parliament in Westminster of the Government Of Ireland Act, also known as the Home Rule Act, in 1914. The Act was intended to provide for self-government in Ireland.
The design depicts John Redmond and Edward Carson who were the two central figures in the fight for and against the Home Rule Act. The stamp was designed by Ger Garland and lithographed by Irish Security Stamp Printers.
A set of 2 stamps and 1 miniature sheet were also issued on 22 May 2014 to commemorate Bloom, one of Ireland's largest outdoor gardening events. The issue was designed by Atelier David Smith and lithographed by Irish Security Stamp Printers:- 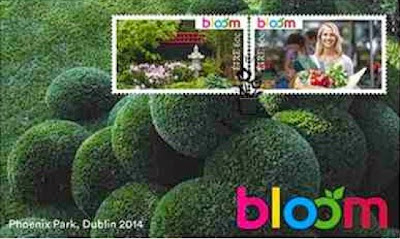 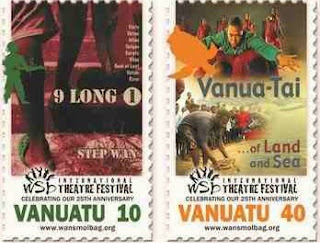 Vanuatu issued a set of 4 stamps on 7 May 2014 to commemorate the 25th anniversary of the Wan Smolbag Theatre which is a local non-governmental organisation which operates in the areas of education, governance, environment and health. The issue is linked to the WSB Theatre Festival. The set was designed by Denise Durkin and lithographed by Southern Colour Print:- 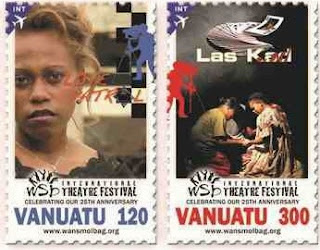 Nowadays it seems impossible for Royal Mail to issue a simple set of stamps. It seemed that the "Sustainable Fish" issue which is to be released on 5 June 2014 would consist of 10 stamps and no miniature sheets nor booklets. Now, however, comes the news that a counter booklet, price £3.72, will be issued to accompany the set - the booklet will contain 4 self-adhesive 1st Class Machin head definitives and 2 of the Fish stamps in self-adhesive format - one identified as "threatened" and one labelled as "sustainable":-

Namibia will issue a sheetlet of 10 stamps on 28 July 2014 which is on the subject of wildlife of the Kalahari Desert. The issue was designed by Helge Denker and presumably lithographed by Enschede, the usual printer of Namibian stamps:- 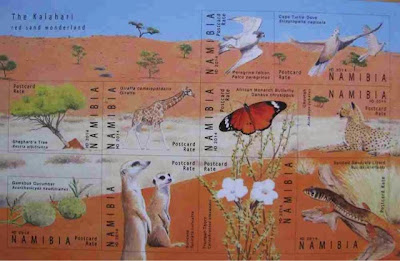 In Blog 411, I illustrated the Guyana and Nevis WWF stamps which were issued on 2 April 2014 and now add the Sierra Leone issue which features the western bongo and which was also released on 2 April 2014 in sheetlets of 16 stamps (4 setenant blocks of 4 different stamps) and miniature sheets of 8 stamps:- 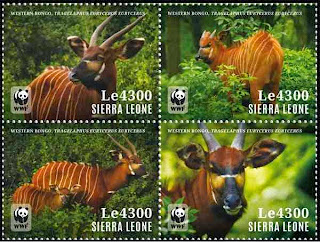 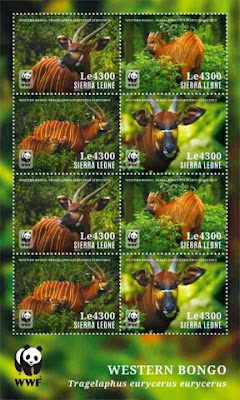 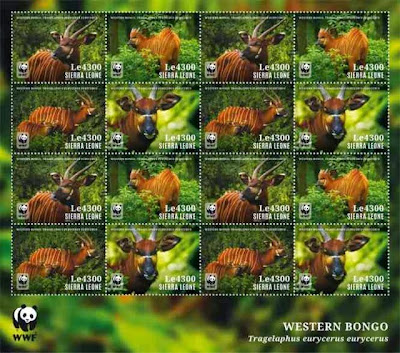 The Stamperija agency marches on with the release of 10 sheetlets each of 4 different stamps and each with an accompanying miniature sheet. Collectors will draw their own conclusions about the quality of the issued products, some of which are depicted below (the subjects were listed in Blog 310). 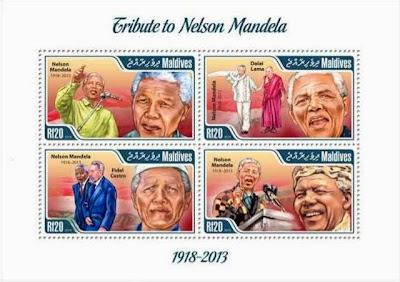 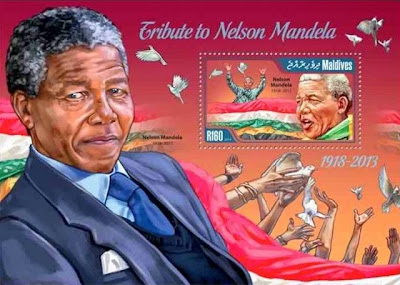 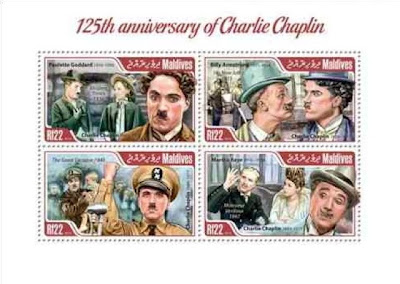 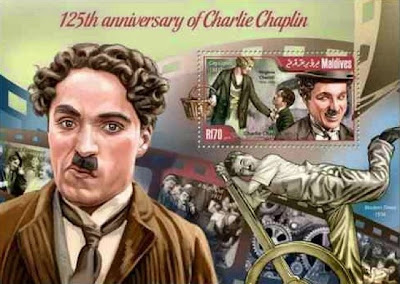 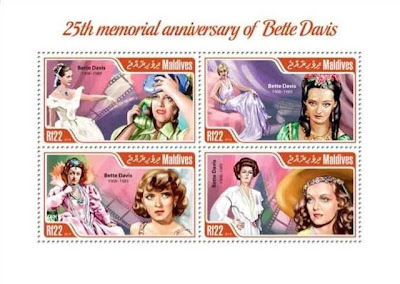 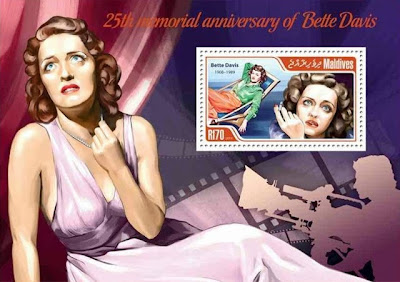 Meanwhile the same agency has also announced more issues for The Solomon Islands which are said to have been released on 10 March 2014. This issue consisted of 9 sheetlets, each of 4 different stamps, with 9 accompanying miniature sheets. The various subjects involved in this philatelic melange are:- the French actress Catherine Deneuve, Australian Nobel Prize winners, Insects, Forms of special transport, Porshe 911 automobile, Marine life, Chinese trains, Aerial firefighting and the History of aviation:- 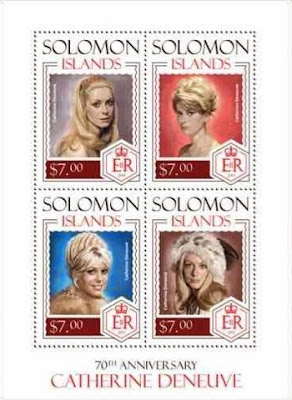 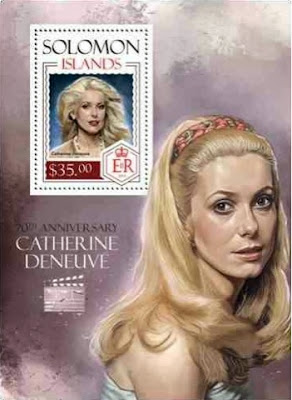 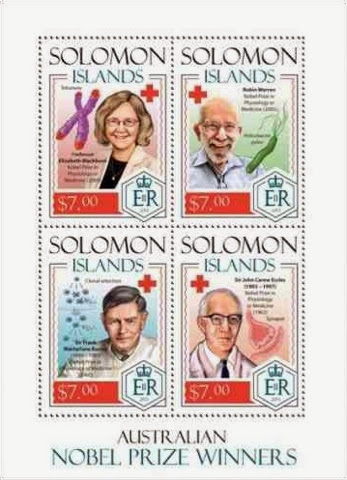 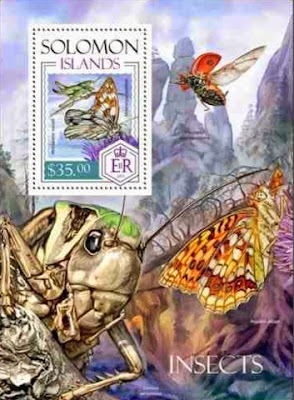 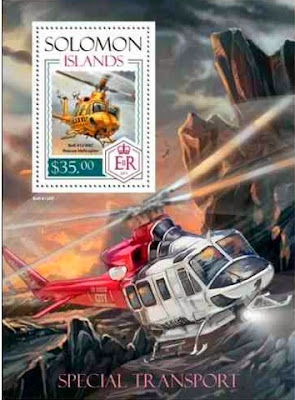