275. Timor Leste To Join The Commonwealth? 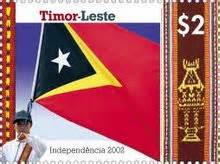 At the end of June 2013, the President of the small state of Timor Leste, Taur Matan Rusk, paid a visit to Australia and subsequent to that, in the early days of July, the government of Timor Leste announced that the country wished to join The Commonwealth and sought support from the Australian and New Zealand governments to this end. The two governments responded positively to the approaches of Timor Leste and so we may well see this previous Portuguese colony soon join the English-speaking organisation and collectors of Commonwealth stamps may have a new country to add to their collection.

East Timor was first colonised by the Portuguese in the 16th century and remained a colony of that country when, in December 1975, Indonesian troops invaded and occupied the territory in the wake of the chaos that followed the Portuguese revolution.. The year before - 1974 - Fretelin, a liberation movement had commenced action to establish an independent state in East Timor and in 1978, Xanana Gusmao took over the leadership of Fretelin. He was eventually captured and imprisoned by the Indonesians but international pressure led to the Indonesians agreeing to the establishment of a United Nations-led administration in the territory from October 1999 and the holding of elections in East Timor in 2000 which led to Gusmao becoming the leader of East Timor's first freely elected government on 7 September 2001 and the granting of independence as Timor Leste on 20 May 2002. During the administration of the United Nations, two stamps, for local and international postage, were issued on 29 April 2000 (depicted above) and these continued in use after the granting of independence.
Australian troops provided a peace-keeping force in the territory from 1999 and they were joined by troops from other countries including New Zealand and it was from this time that Timor Leste formed close relations with these two regional powers. Australia Post provided the nascent Timor Leste Post Office with a gift of 2 million stamps in 4 values which were issued on independence day. The stamps were designed by Janet Boschen, an established designer of Australian stamps, and printed in lithography by Sprintpak:- 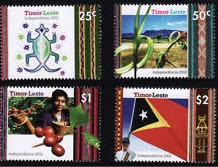 Two other stamps were also issued on 20 May 2002 which portrayed President Gusmao and a map of Timor Leste:-

No further stamps were issued until 28 November 2005 when 4 definitives were released which depicted the national flag of Timor Leste along with portraits of local inhabitants and coinage:- 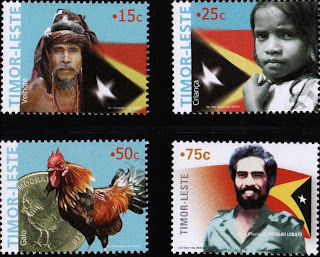 New issue policy has remained pleasingly ultra-conservative since then with 2 stamps being issued on 20 May 2008 which depict Nobel prize-winners:-

and a splendid set of 6 stamps (2 values depicted below) on the theme of the International Year of Biodiversity which was issued on 30 August 2010. The stamps, designed by Ivo Schneider, all depicted different species of amphibians and reptiles and there was an accompanying miniature sheet which is very scarce:- 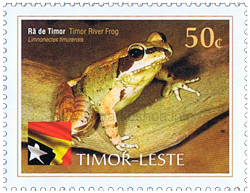 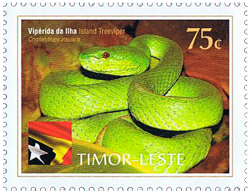 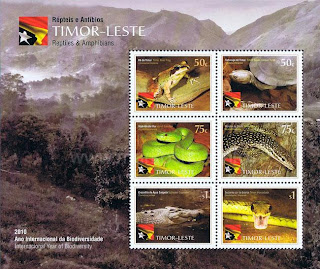 The most recent issue was released on 14 February 2011 to commemorate the 20th anniversary of the Portuguese-speaking equivalent of The Commonwealth, AICEP of which Timor Leste is a member. Similar stamps were issued by the other members of the Organisation:- 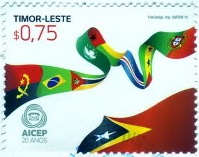 If Timor Leste is admiited to Commonwealth membership in the near future then the little country will be another territory to be included in the Commonwealth section of stamp catalogues. When Cameroun, Mozambique and Rwanda all joined The Commonwealth, only stamp issues which were released after the countries joined the organisation were included in the catalogues but so few stamps have been issued by Timor Leste that it seems sensible to include all its stamps together in the Commonwealth section if only for convenience to collectors. Collectors of Commonwealth stamps may wish to start obtaining past issues now in anticipation of events but be warned - the few stamps that have been produced so far are not cheap. But they are interesting.