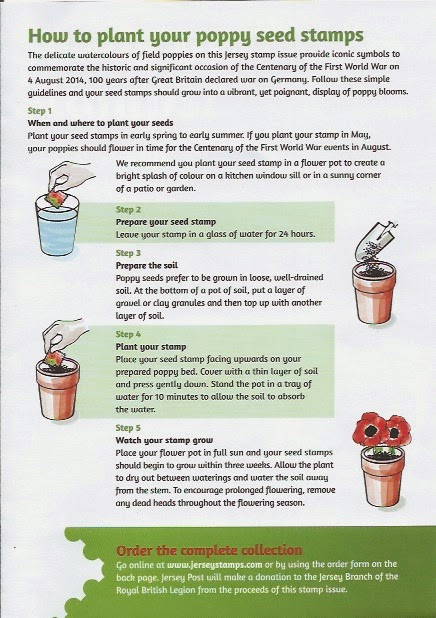 In Blog 394, I mentioned the Jersey Post issue which was released on 6 May 2014 to commemorate the centenary of the beginning of the First World War. I bemoaned the fact that the gimmick of incorporating poppy seeds in 2 of the stamps detracted from the beauty of the designs. But what I now read about this issue seems to me to scale the heights of absurdity which have only been achieved once before philatelically - again by Jersey - with the infamous Diamond Jubilee collectable which had a tiny diamond attached to it and was then sold for a sum of well over £100.
Those wishing to grow the poppy seeds are instructed to plant the entire stamp (!) (see above) so that "the biodegradable plastic cover" in which the seed is housed and which is attached to the rest of the stamp will decompose as part of the whole planted stamp - so you might get a poppy flower out of it but if you want to post a letter the bad news is that your stamp lies rotting in the garden! Jersey's publicity literature proudly announces that "This is the first time this print technique has been used on British stamps". Actually, these stamps are NOT British stamps since Jersey is not part of The United Kingdom and chose to have its own independent postal administration in 1969.
In Blog 407 I asked the question, "Why do postal administrations still issue postage stamps even though so few are used on real mail nowadays?" I ventured a few answers and now we have yet another reason - so that they can be planted in the garden!
Jersey Post's numerous issues continue to appear with a heavy emphasis on the subject of war - a set of 6 stamps and an accompanying £2 miniature sheet which commemorate the 70th anniversary of D-Day will be released on 6 June 2014. The paintings featured on the stamps are by David Pentland and the issue was lithographed by Lowe-Martin:-

More peacefully, Jersey will also release a set of 8 stamps on 30 June 2013 on the subject of summer. The attractive designs were prepared from photographs by Andy Le Gresly and lithographed by Enschede:-

Isle Of Man's latest publicity has announced that its upcoming new issues are:-
16 July 2014 - SEPAC - 1 stamp depicting the hellebore design from the previously issued winter flora issue,
8 August 2014 - Playing cards - Manx souvenir playing cards sold from his shop in Douglas by the 19th century businessman, Samuel Webb,
8 August 2014 - Centenary of the Panama Canal - Presumably, the Isle Of Man Post Office will claim that the issue is relevant to the island because the United States government commissioned a Manxman, William Kennish (1799 - 1862), to plan a route for the Panama Canal and he published a report on the subject in 1855.
Canada Post will issue 5 self-adhesive stamps from booklets and 1 gummed miniature sheet which combines all 5 stamps on the subject of the 75th anniversary of the National Film Board of Canada. The issue was released on 2 May 2014 and designed by Paprika and lithographed by the Canadian Bank Note Company:-

A set of 5 self-adhesive stamps from booklets and a gummed miniature sheet will be issued on 16 May 2014. The stamps depict UNESCO World Heritage sites in Canada and were designed by Lime Design and lithographed by Lowe-Martin:- 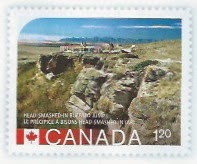 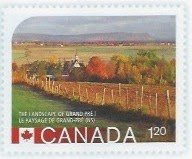 Canada will also issue a domestic rate self-adhesive stamp from booklets or from panes of 16 stamps and a gummed $2.50 souvenir sheet which commemorates the centenary of the sinking of the RMS Empress of Ireland in the St. Lawrence River on 29 May 1914. The issue was designed by Isabelle Toussaint and Susan Scott and lithographed by Lowe-Martin:- 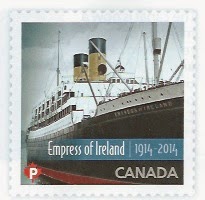 An Post, the Irish Post Office, issued a pair of stamps on 8 May 2014 as part of the 2014 Europa issue. Not surprisingly, 1 design features an Irish harp while the second value depicts a bodhran, an Irish drum. The stamps were designed by Design Factory and lithographed by Irish Security Stamp Printers:- 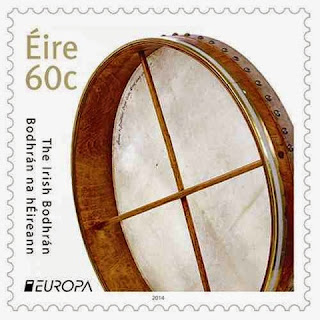 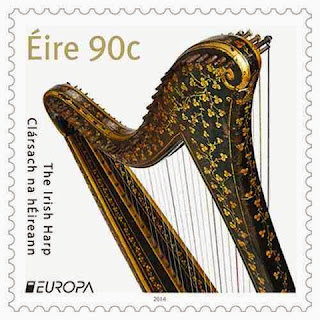 Turks And Caicos Islands issued 1 stamp printed in a sheetlet of 4 and 1 x $10 miniature sheet on 1 May 2014 to commemorate the territory's first Chief Minister, the late James McCartney. He was in the post of Chief Minister from August 1976 until 9 May 1980 when he was killed in plane clash over New Jersey:- 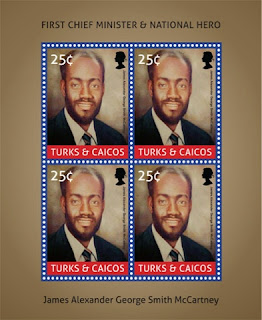 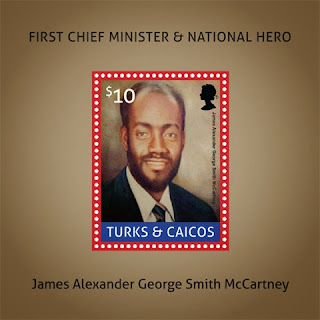 Papua New Guinea - 24 April 2014 - Centenary of the beginning of the First World War - 4 stamps and 1 miniature sheet - the designs do not appear to have relevance to the local events of the war:- 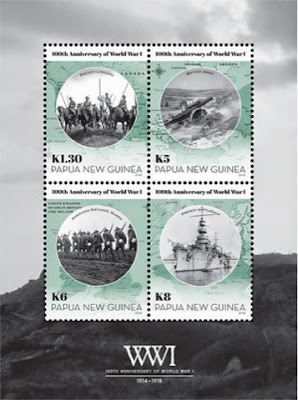 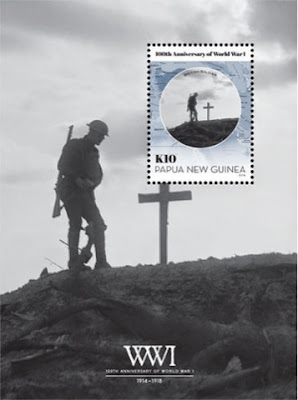 St. Vincent And The Grenadines - 12 May 2014 - Centenary of the Panama Canal - 1 sheetlet of 4 different stamps and 1 miniature sheet:- 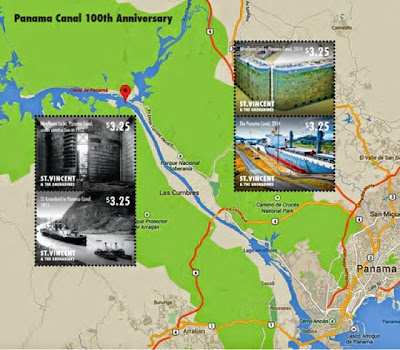 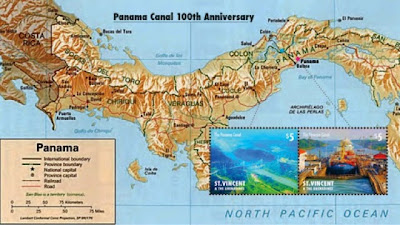 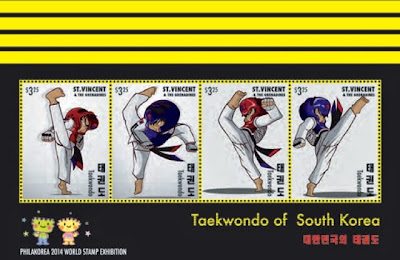 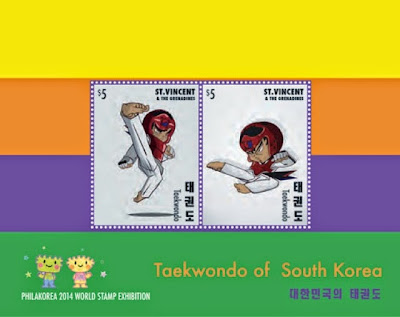 - 5 May 2014 - Canonisation of St. John Paul II - 1 sheetlet of 3 different stamps and 2 m.s. each with 2 different stamps. The need for St. Vincent to release such an issue is very questionable because Catholicism is practised by only 13% of the population - much less than Anglicanism (47%) and Methodism (28%):- 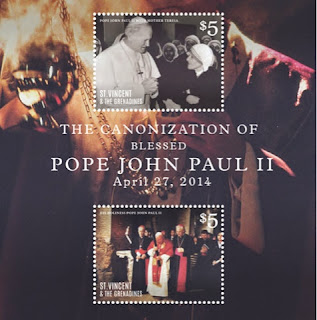 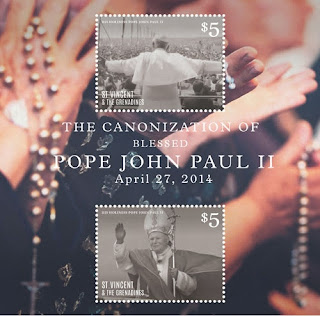 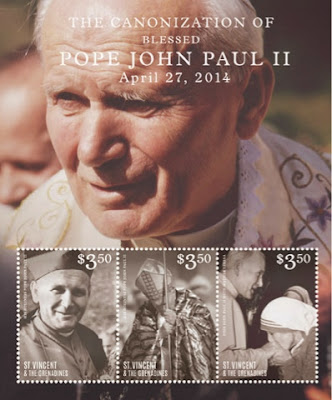 Guyana - 24 March 2014 - 150th Birth anniversary of Henri de Toulouse-Lautrec (French artist) - 1 sheetlet of 4 different stamps and 1 m.s. Another sheetlet of 4 stamps and an accompanying miniature sheet on the same subject were illustrated in Blog 391:- 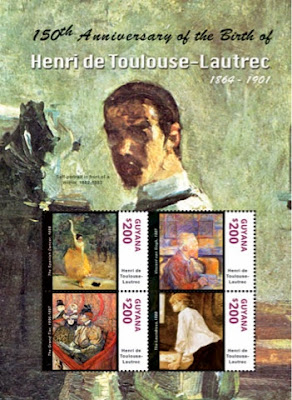 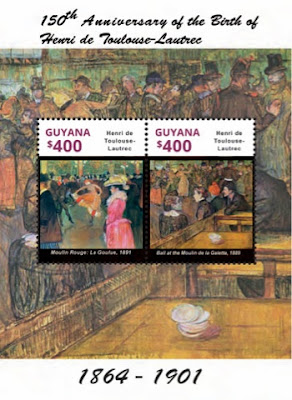 -  24 March 2014 - "World Famous Paintings" - 1 sheetlet of 3 different stamps and 1 m.s. Another sheetlet of 3 stamps and an accompanying miniature sheet on the same subject were illustrated in Blog 391:- 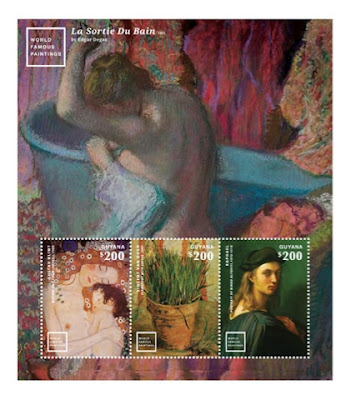 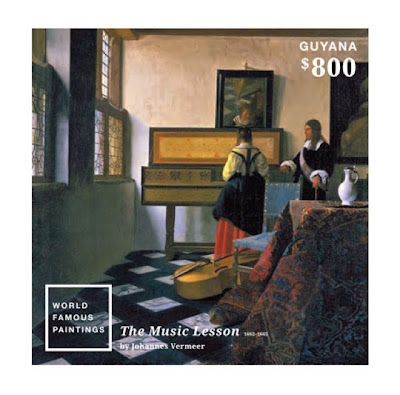