373. Shakespeare In Jersey And Vikings Do Battle In Ireland.

"Be not afeard; the isle is full of noises,
Sounds, and sweet airs that give delight and give not hurt..." - Caliban from The Tempest.

Jersey Post is to issue a £3 miniature sheet on 23 April 2013 to commemorate the 450th anniversary of the birth of the greatest English playwright and poet, William Shakespeare, who brought so many new phrases now in day-to-day use to the English language. I can find no connection between Shakespeare and Jersey and so I really ought to be omitting this item from my collection but for once I think that any English speaking country has the right to celebrate this great figure so I will be happily adding this particular miniature sheet to my Jersey album. I would have been even happier if the issue had been given a lower face value.
In my search for any quote from Shakespeare which could be linked to Jersey I came up with the above quote from The Tempest which could be applied to any island and might be applied to Jersey but when we think about Jersey's stamps the quote could be amended so that it reads:
"Be very afeard; the isle is full of stamps,
Miniature sheets, and Post and Go's that do not delight and give hurt..."
At least Jersey has seen fit to commemorate this important anniversary which is more than can be said for Royal Mail, the postal administration of the land of Shakespeare's birth, where it is more important to feature Bob The Builder and Peppa Pig on stamps than it is to commemorate the birth of this great Englishman (see Blog 326).
In Blog 361 I mentioned that the Isle of Man Post Office was planning to issue a set of 6 stamps to commemorate the millenium anniversary of the Battle of Clontarf. The date of issue will also be 23 April  2014, Shakespeare's birthday. The battle arose out of resistance to King Brian Boru (see £1.60p stamp depicted below) when the king of Leinster, Mael Morda, and the leader of the Vikings in Dublin,Sigtrygg  Silkbeard, formed an alliance against Brian who retaliated by raiding around Dublin and imprisoning his own wife, Gormflaith, who was the mother of Mael Morda. Gormflaith contacted Sigurd Lodvesson, the Viking Earl of Orkney, who agreed to come to her aid and he persuaded Brodir, the king of The Isle Of Man, (see illustration of the 2p value below) to join him in the venture. Brodir and Sigurd both planned secretly to kill each other after the fight against Brian Boru and take the High King's throne themselves.
In 1014 Brian Boru marched on Dublin and when he arrived he heard that Sigtrygg's Viking allies had abandoned him and embarked in their ships and set sail. This was a ruse as during the night the Viking ships changed direction and headed back for shore in order to surprise Brian. The Vikings landed safely and formed up into 5 divisions while Sigtrygg remained in Dublin. 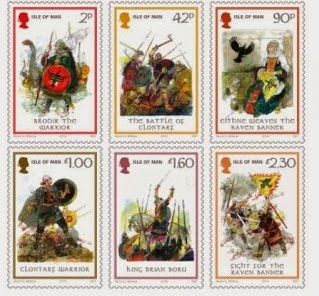 At first the battle went the Vikings' way and the Manx king, Brodir, led the charge against Brian Boru's forces but after making ground, he ran up against Brian's brother, the splendidly named Wolf The Quarrelsome (really,Tolkien could not have come up with anything better than this!) and after being knocked to the ground by the fearsome warrior, Brodir fled the battlefield to hide himself.
By the afternoon, the Manx Vikings were fleeing to their ships to escape (perhaps this inglorious performance by the Manx suggests that the Manx Post Office would have been better not issuing a set to commemorate this battle).
The Irish next slew Sigurd who was said to have carried a "magical banner" (90p and £2.30p values above) and with Sigurd dead the Vikings fled back to their ships while the Dublin Vikings tried to return to the town but the Irish cut them off from the bridge back to Dublin. Meanwhile the cowardly Manx king, Brodir, who had been hiding in the woods near Dublin, spotted Brian Boru praying in his tent and he led a force into the camp and slew the king and his retainers. Brodir boasted "now let man tell man that Brodir felled Brian". However, the Manxman got his comeuppance as the Irish tracked him down, captured him and had him killed gruesomely by none other than his nemesis, Wolf The Quarrelsome (I repeat what I have written above, why is The Isle Of Man commemorating this appalling king and the dreadful defeat of the Manx? - it's rather like the French issuing stamps to commemorate the Battle of Agincourt).
Six thousand Vikings were slain in the battle including all of their leaders and the Irish lost 4000 warriors including King Brian Boru and most of his sons and a king whom Brian had deposed returned to take the throne. The only winner was Sigtrygg who remained ruler in Dublin until his death in 1042. Ireland entered a period of bloody factional fighting.
The 6 excellent stamps being released in this set feature the artwork of the wonderful illustrator, Victor Ambrus, and were lithographed by BDT International and despite the fact that the Manx hardly covered themselves in glory at the Battle of Clontarf the set does make for an interesting issue and I shall be happy to add them to my collection.
I have previously mentioned the issue from The Isle Of Man which will be released on 15 April 2014 on the subject of rare breeds of domestic animals. The 6 stamp miniature sheet is based on art by Jeremy Paul who provided the art for last year's excellent, if unnecessary, "Big Cats and A Journey Through Africa" issue and this latest set is equally attractive but pleasingly much more locally relevant. The miniature sheet is illustrated below:-

Returning to Ireland, a single stamp will be released on 20 February 2014 to commemorate St. Patrick's Day. The stamp was designed by Oonagh Young and Edward Coady and lithographed by Irish Security Printers:- 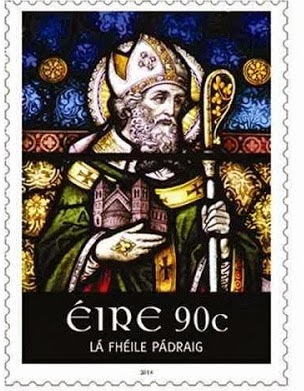 Elsewhere in Europe, Cyprus will issue 4 stamps on 12 March 2014 on the subject of "The Four Seasons". The 4 stamps were designed by Melanie Eliopoulis and lithographed by Giesecke and Devrient Matsoukis of Greece:- 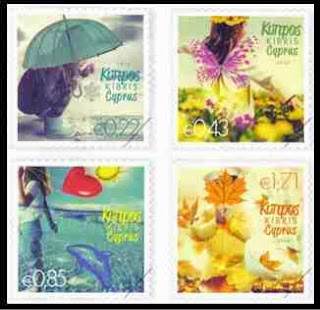 Malta Post is attending the "ECC Torremolinos 2014 European Collectors' Convention" to be held in Spain from 27 February to 2nd March 2014 and has produced a new exhibition souvenir in the form of the Map of Malta greetings stamp with an appropriate label attached to it:- 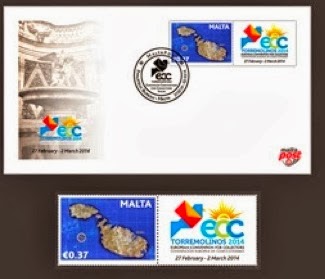 Finally, in Britain, something astounding has happened:-  Royal Mail has used one of its own postage stamps on a letter I received recently from the Philatelic Bureau! A few days ago I received some items from the Philatelic Bureau in Edinburgh (I wonder what will happen to that if Scotland chooses to separate from The United Kingdom) and they were enclosed in an envelope which had had one of the 60p 2013 Butterflies stamps attached to it. I contrast this with an envelope received from the Philatelic Bureau on the very same day which simply had a postage paid indicator printed on the envelope.
I do hope that this is the beginning of a new approach to its customers and that instead of using pre-paid printed envelopes Royal Mail will in future go the extra mile of actually using postage stamps on its envelopes - if nothing else it's a form of advertising its own product - if potential customers see these attractive items being used on any post they receive from Royal Mail they may want to actually buy a mint set.
However, I have one question - why does Royal Mail charge £1.45p for postage "and handling" when only a 60p stamp is needed for postage? 85p for "handling" - really? 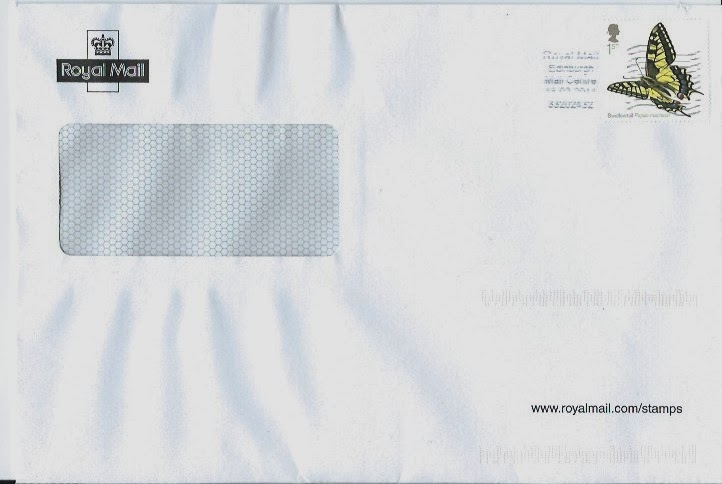 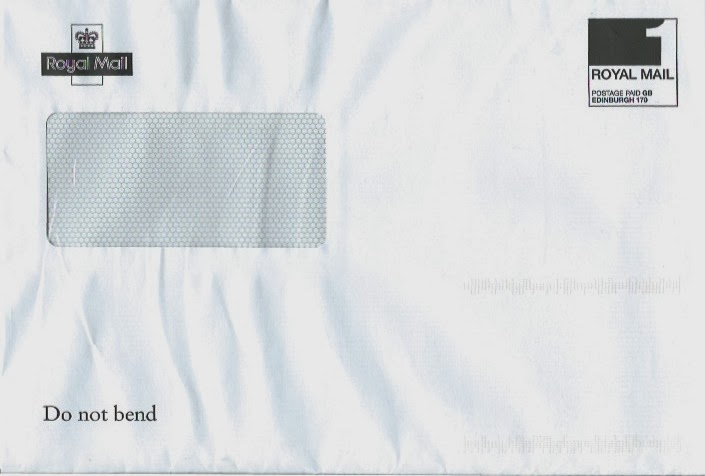