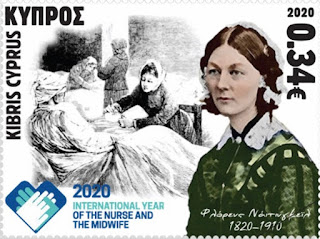 🇨🇾 In the year that marks the Bicentenary of the birth of Florence Nightingale Cyprus Post has chosen to feature this great historical figure, the founder of modern nursing, on a stamp to be released on 14 May 2020. The stamp also commemorates the International Year of The Nurse and Midwife. It is a fitting subject for a stamp at a time when the world is in the eye of the storm of the COVID-19 pandemic. The stamp will be issued in small sheetlets of 8 stamps.
It is sad that Royal Mail has chosen in contrast not to commemorate philatelically the Nightingale anniversary, preferring instead to ignore this extraordinary woman and her achievements and to issue stamps commemorating an American television series, Star Trek, which has little relevance to the United Kingdom. Those who plan the Royal Mail new issue stamp programme seem to know the price of everything and the value of nothing and as usual have got things badly wrong. A stamp commemorating Florence Nightingale at a time like this, when new hospitals named after her are being opened to cope with the Coronavirus crisis, would have been a small contribution from Royal Mail towards honouring the health workers who struggle against the virus and those who have died in that struggle. Those who plan new stamp issues for Royal Mail really need to completely rethink their new issue policies and to choose once more to honour the achievements of great Britons rather than to try to make a fast buck. I would go so far as to say that Royal Mail’s current new issue policy is despicable.
But at least some postal services have maintained an integrity long lost by Royal Mail and Australia Post and others. Cyprus Post continues with a sensible, relatively conservative new issue policy in which its stamps tell the world about Cyprus, its people and the issues which are important to the country. Royal Mail could learn a lot from Cyprus Post and its approach to what should be featured on its stamp issues.Rating:- ****.

Prior to the issue of the above stamp Cyprus Post will release a pair of stamps, both printed in sheetlets of eight, on 4 May 2020 as its contribution to this year’s EUROPA omnibus series. This year’s theme is ‘Ancient Postal routes’ and the designs depict admirably routes taken by postal services across the island. Rating:- ****. 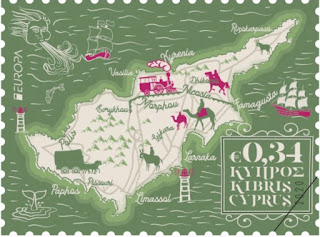 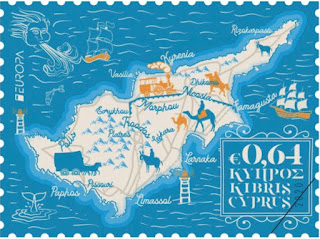