🇬🇧 Royal Mail has announced that over the coming week it will apply a special postmark to all letters posted to commemorate the 100th Birthday of Captain Thomas Moore, popularly known as ‘Captain Tom’.
Captain Tom has come to represent the British public’s spirit in the fight against the COVID-19 pandemic after he decided to walk 100 laps of his garden before his 100th birthday. He sought sponsorship for his walk with the aim of raising £1000 for the Health Service frontline staff and has so won the hearts of the British public that he actually raised £29 million by doing so. He completed his target 14 days ahead of schedule and increased his target to 200 laps. 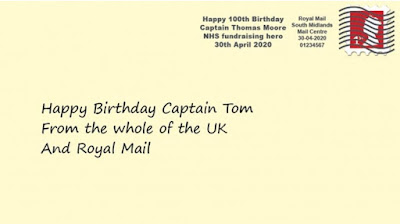 A spokesman for Royal Mail said, “As Royal Mail works to keep the country connected during these challenging times, we are honoured to issue a special postmark in honour of his 100th birthday”.
Royal Mail has had to adapt its sorting machines in the South Midlands Mail Centre to re-route all post to Captain Tom into a dedicated collection post and has so far processed 100000 birthday cards which have been sent to him. 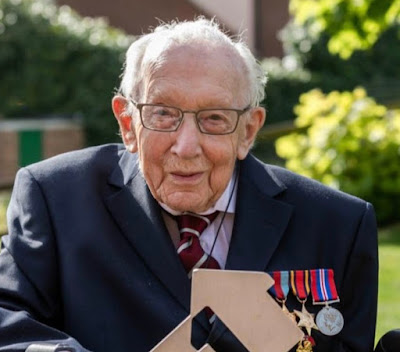 Captain Tom has also become the oldest person to have a record placed in the number 1 spot in the UK music charts when his version of You’ll Never Walk Alone with singer Michael Ball sold 82000 copies last week.
Can Royal Mail bring itself out from its philatelic petrifaction where it finds it impossible to issue a stamp with less than 2 years notice and release a stamp issue to commemorate the British people’s spirit in the fight against COVID-19? Such an issue could be a morale booster for the British public at this time.