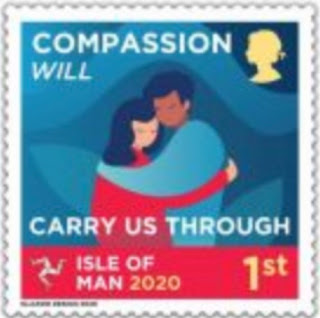 🇮🇲 The designs of the forthcoming 8 stamps to be issued by Isle Of Man Post Office to commemorate the ‘Front line’ workers in the current campaign to beat the COVID-19 pandemic have now been revealed (see Blog 1645). The planned date of issue is 4 May 2020. The issue titled ‘#Carry Us Through’ was designed by Ben Glazier of Glazier Design and lithographed by Lowe Martin and perforated 14. The 8 stamps will be issued in standard format with “a donation” to made by Isle Of Man Post Office to the Manx Solidarity Fund. The 8 stamps will also be sold in self-adhesive format from kiosks and from post offices in the ‘Variable Rate Definitives’ series. The total combined price of the gummed and self-adhesive stamps is £12.94p so I hope that the donation to the Manx Solidarity Fund will be a generous one.
One design in the set is a cause for concern (see above) as it portrays two people who are doing anything but self-distancing themselves from each other. Hopefully they come from the same household otherwise the stamp is definitely sending out the wrong message.
This is a set that has importance to current events in The Isle Of Man and everywhere else for that matter and it is good that the local postal service link it to a donation to a local charitable fund but the designs are disappointingly undistinguished though, admittedly, have an air of cheerfulness about them which is not a bad thing at a time like this. Rating:- ***. 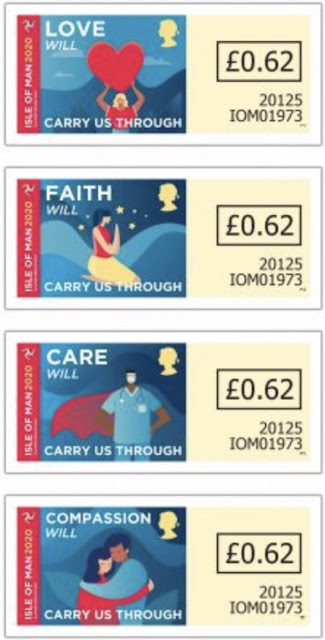 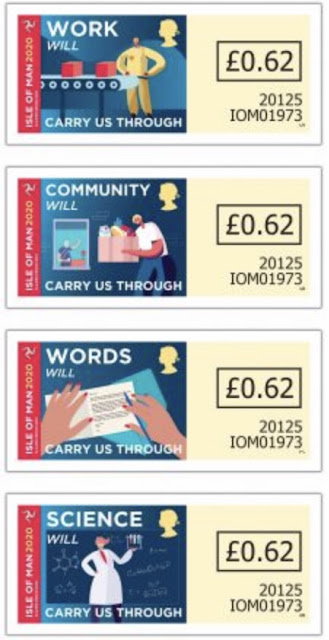 Figures released on 24 April showed that there had been 308 confirmed cases of COVID-19 on the island of which 230 had recovered with 18 people having died from the condition which was unchanged from the previous day.
Posted by White Knight at 03:42