🇬🇬 Guernsey Post will issue its Post and Go ‘Guernsey Flag’ stamp on 9 May 2020 with an additional inscription applied to it to commemorate the 75th anniversary of the Bailiwick’s liberation from occupation by Nazi forces. The inscription reads, “Liberation 75/1945-2020” and the stamp will be dispensed from kiosk GG02 situated at the Postal Headquarters. The stamp will be on sale for just 6 days until 15 May 2020 which seems like an unnecessarily short period of sale to me. Rating:- **.

🇬🇧 I often write in this Blog about how regrettable it is that Royal Mail ignores important British national events and truly historic anniversaries preferring instead to release stamps featuring ephemeral popular culture the significance of which may or may not survive the test of time. Thus we are due to have stamps released at the end of 2020 to commemorate the American television and movie series Star Trek but nothing last year to commemorate the publication of Daniel Defoe’s novel Robinson Crusoe, one of the earliest English novels. I accept that there are clearly problems with the racial attitudes which appear in the 301 year-old novel but its publication was a landmark in the history of English literature which should not be forgotten. 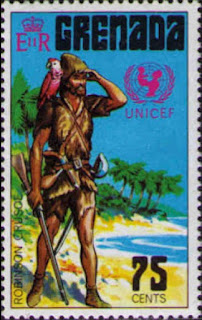 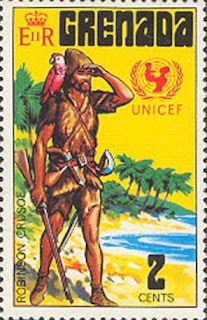 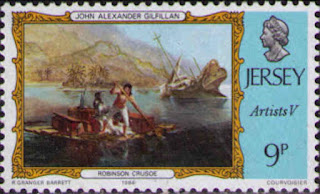 There are still many notable Britons who have not been commemorated on British stamps in the 55 years since the British postal service decided to have a regular programme of new stamp issues and Defoe is one such of those notable individuals. Daniel Defoe wrote a notable work which is currently acutely relevant - A Journal of the Plague Year, published in 1722 which dealt with the bubonic plague outbreak of 1665.
Today we recognise some of the scenes he wrote about. “The face of London was now indeed strangely altered .... The voice of mourning was truly heard in the streets”. “And finding that I ventured so often into the streets he [a friend] persuaded me to lock myself up and my family and not to suffer any of us to go out of doors but as I had not laid up any store of provisions it was impossible that we keep within doors entirely ....”
Again Defoe recognised the symptomless carrier which may be a problem with the present epidemic, “One man, who may have received the infection, and knows it not, but goes abroad and about as a sound person, may give the plague to a thousand people, and neither the person giving the infection nor the persons receiving it know anything of it”.
And again he recognised what we see now; when paying for food purchases there was a desire for contactless payments, “The butcher would not touch the money, but had it put into a pot of vinegar, which he kept for that purpose. The buyers carried always small money to make up any odd sum, that they may make no change. They carried bottles for scents and perfumes in their hands”.
“It must be confessed, that though the plague was chiefly among the poor, yet were the poor the more venturous and fearless of it, and went about their employment with a brutal courage .... Scarce did they use any caution, but ran into any business they could get employment in”. Pleasingly, this last sentence at least, does not apply to the problem of 2020 as all sections of the population seem to be sticking to the government’s request for continuing social distancing and isolating.
By the winter of 1665 the death count diminished considerably almost to zero.
London’s trials were not over - the following year, 1666, the city was ravaged by the Great Fire. 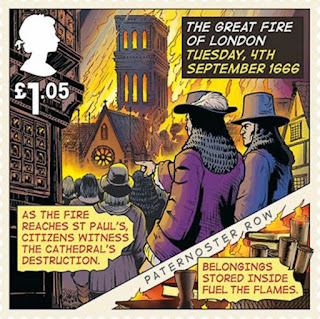 It’s sad that Royal Mail has preferred to commemorate Mr Spock in preference to Daniel Defoe but in the end I suppose it boils down to what is most likely to make profits for the business called Royal Mail and its shareholders and the commemoration of notable national figures takes a very distant second place.

🇿🇲 1 April 2030 - It was some time ago that the Postal service of Zambia issued the most surcharged stamp in philatelic history and it has recently added to the record achieved by this particular stamp - originally the K2700 stamp of 2005 which depicts the explorer David Livingstone and Victoria Falls - by surcharging it again to take account of local currency inflation. I do not know the precise date of issue but it is thought to have been released about November 2029. The stamp now has a face value of K9000000 and it has been surcharged on the K325000 on K52000 on K4500 on K330 on K14.00 on K8.60 on K5.00 on K4050 on K2700 which means that it has now been surcharged 9 times. The stamp has only been sold at the single remaining post office in Lusaka and has not been made available to collectors as it is intended solely for use on ordinary domestic mail what little there is of it. I imagine it will be hard to track down this rare stamp and that it may be costly. Nevertheless I give it a rating of ****. 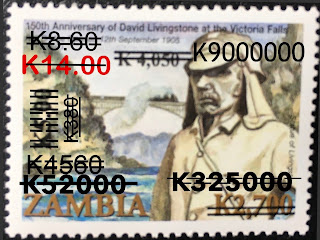 Addendum - reply to Trevor’s comments (see below). Thanks for the enjoyable comment. A brilliant piece of calculating (or use of a calculator!) The K9000000 reflects inflation by 2029 though who knows what may have happened by this time next year? Zambia’s 2029 high value of course is outshone by the 10 million dollar value issued by Zimbabwe in 2009. It’s one of my favourite Commonwealth stamps. 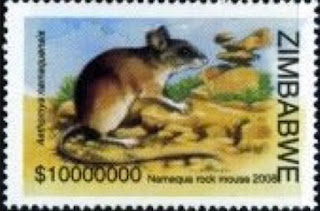