🇧🇸 The postal service of Bahamas will issue a set of 4 stamps on 20 December 2021 as this year’s Christmas issue. The colourful issue was designed by Andrew Robinson and lithographed by Cartor and the stamps are perforated 13.5. Rating:- ****.
Thanks to Juliet Warner of Pobjoy Stamps foot information about this issue. 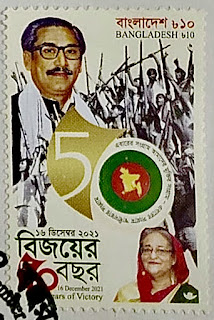 🇧🇩 Bangladesh Post issued a single stamp on 16 December 2021 to commemorate the 50th anniversary of Bangladesh’s victory in the War of Independence against Pakistan. An interesting and historic issue. The design features the Father of the Nation, Sheikh Mujibur Rahman and the present prime minister Sheik Hasinah. Rating:- ****.
🇮🇳 India Post issued a single stamp on 16 December 2021 to also commemorate the 50th anniversary of the end of the Bangladesh war and the liberation of the Bangladeshi capital, Dacca, Indian forces having played an important role in support of the fight of the Bangladeshis against the forces of the government of Pakistan. The issue is titled Swarnim Vijay Diwas which is the name given to the victory over Pakistan when Dacca fell, 93000 Pakistani soldiers surrendered and Bangladesh came into existence. Another historic commemoration. Rating:- ****. 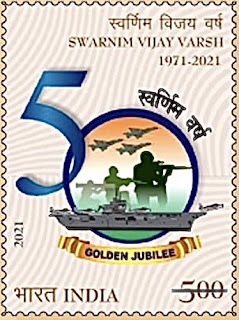