🇬🇧🇪🇬  I was recently reading a book about the former British prime minister Harold Macmillan whose role in the ending of the British Empire is of the greatest importance which makes him a rather more important holder of the premiership than many others in the 20th century. Macmillan recognised the need to get on and see Britain’s African territories achieve independence and, to the great annoyance of the South African apartheid regime, spoke to the South African Parliament on 3 February 1960 saying that the “Wind of change is blowing through this continent [Africa]”. Apart from a stamp from Togo, Macmillan has not yet, to the best of my knowledge, featured on a postage stamp even when Royal Mail depicted eight important British prime ministers on an issue a few years ago. This is a pity since the man is probably more worth commemorating on a British postage stamp than, say, Batman or The Hulk or Captain Kirk.

Macmillan, who was wounded several times as an officer in the First World War, gradually rose to prominence as a politician in the Conservative Party but was something of a rebel against the party’s establishment and became a supporter of Churchill during the latter’s ‘Wilderness Years’ in the 1930s. He joined with Churchill, Anthony Eden and others in opposing Chamberlain’s policy of appeasement to Hitler and when Churchill became prime minister, Macmillan’s star began to rise. Eventually Churchill sent him to work as Minister Resident in The Mediterranean forming an excellent working relationship with General Eisenhower and dealing with the tantrums of the French leader General De Gaulle in the North African campaign.

When Churchill retired as prime minister in April 1955 the post was taken up by Anthony Eden and Macmillan became part of the government. In July 1956 the revolutionary Egyptian president, Gamal Abdul Nasser, announced the nationalisation of the Suez Canal in response to the withdrawal of British and American funding of the Aswan Dam. Eden believed that nationalisation was a violation of the Anglo-Egyptian Treaty which Nasser had signed with the British and the French in October 1954. At that time, two thirds of Western Europe’s oil supplies were transported via the canal and Eden saw Nasser’s move as a threat to the nation’s oil supplies. A conference was held in London which came up with the Eighteen Nations proposals which included Egyptian representation on the board of the Suez Canal Company but Nasser rejected these. Eden feared that Nasser intended to form and take on the leadership of an Arab Alliance which would cut off Europe’s oil supplies and together with the French government he resolved to remove Nasser from power.

On 14 October 1956 the French government presented to Eden a plan in which Israel would invade Egypt and Britain and France would give an ultimatum to both sides to stop and, when one side refused they would send in troops to enforce the ultimatum, separate the two sides, occupy the Canal Zone and depose Nasser. Eden declined to involve the Americans in the plan but it was realised that the now President Eisenhower’s tacit approval of the scheme was necessary. Macmillan, the President’s wartime friend, was despatched to Washington to meet senior government figures and came away with the completely incorrect idea that the Americans were sympathetic to the plan. A presidential election was imminent and the last thing that Eisenhower wanted was to have to deal with a war. Macmillan’s lamentable misjudgement strengthened Eden’s resolution to take military action against Nasser. Eden still held on to the idea that Britain could be an independent world power.

On 29 October 1956 Israel invaded Egypt’s Sinai peninsula. On 5 November British and French paratroopers landed along the canal to separate the two sides and restore peace. Eisenhower, furious that friends he had trusted should put him in such a difficult position just days before the presidential election, immediately and powerfully opposed the invasion. He threatened to damage seriously the British financial system by selling the American government’s holding of pound Sterling bonds. In the face of the threat of financial meltdown because of American actions the Allies had no choice but to discontinue their military intervention.

The Egyptians retaliated by sinking 40 ships in the canal and blocking it to the passage of shipping from October 1956 to March 1957. The Allies had achieved several of their military goals but the canal was unusable. The Suez intervention had turned into a débacle.

The affair proved that the British had become powerless to take independent international action without the approval of the government of The United States. If the achievement of Independence by India had been the beginning of the end then the Suez Crisis did indeed mark the end - a humiliating end. For the Americans the humiliation of Vietnam, Iraq and Afghanistan was yet to come - let’s hope they have finally learned their lessons - and the French still had the pain and horror of what was soon to happen in Algeria but the bell was tolling for Western imperialism.

Eden was soon removed from office and Macmillan took over as prime minister. He had learned the necessary lessons and under his premiership Malaya, Singapore and Cyprus were soon to be granted their independence. In 1958 Ghana was led to independence by Kwame Nkrumah though it would be decades before political stability was achieved there and under Macmillan the United Kingdom brought several other major African states to the stage where the Union Flag ceased to fly over them. And, of course, as mentioned above, Macmillan pointed the way, three decades before it was realised, to the achievement of black majority government in South Africa. Suez was the turning point when Britain, feeling shamed and humiliated, realised that the imperial game was up.

The Suez campaign was documented philatelicly by the Egyptian Post Office as events took place. A single stamp was issued on 26 September 1956 to commemorate the Nationalisation of the Suez Canal. The Suez campaign itself was marked by the issue of another single stamp on 20 December 1956 (at the head of this Blog). The stamp depicted Egyptians reacting to the landing of Allied paratroopers and commemorated the defence of Port Said. This stamp was overprinted in red and reissued on 14 January 1957 to commemorate the evacuation of the Allied forces from Egypt. Finally, on 15 April 1957, a single stamp was issued, similar to that released on 26 September 1956, to commemorate the Reopening of the Suez Canal.

But the Egyptian Post Office had not finished rubbing philatelic salt in the British and French wounds. A set of five stamps was issued on 26 July 1957 with the splendidly dramatic title, “Egypt Tomb of Aggressors”, each stamp depicting the defeat of a force invading Egypt over many centuries of history. The issue naturally included the Anglo-French humiliation in 1956 as well as the siege of Avaris and the driving out of the Hyksos in 1580 BC, Saladin at the Battle of Hitteen (Hattin) in his fight against the Crusaders in 1187 AD, the Battle of Ein Galout (Ain Jalout) when invading Mongols were repelled and the Battle of Mansourah in 1250 when the Crusading French king, Louis IX was taken prisoner. 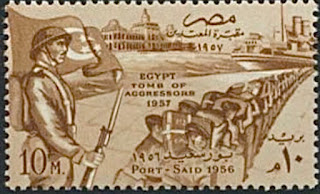 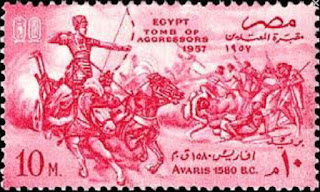 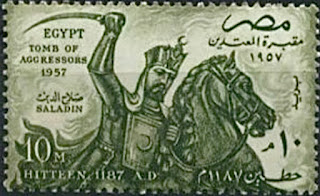 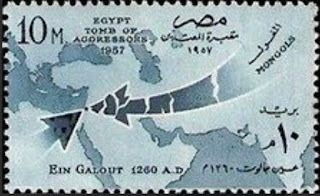 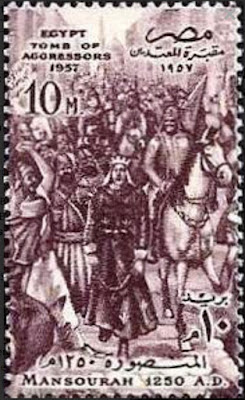 Two other issues commemorated events in Egyptian history where the Egyptians fought against the British, and in one case, the French as well. A single stamp issued on 21 September 1957 commemorated the 75th anniversary of the Arabi/Urabi revolution where the Egyptians attempted to resist the domination of the British and French. The British however installed a puppet Khedive and Egypt fell under a sustained period of British rule firstly as a Khedivate and then in 1914 as a British Protectorate.

The second issue was released on 28 March 1957 and celebrated the 150th anniversary of the Battle of Rosetta, a timely anniversary given that it was so close to the Allies’ recent forced evacuation. On this occasion the issue commemorated the defeat of the British who landed in Egypt hoping to take control of the country to safeguard its agricultural produce as the Ottomans, who ruled Egypt, were allied to Bonaparte’s regime in France which was then determined to crush the rest of Europe and isolate the British. The British hoped to replace the Ottoman Viceroy in Egypt, Muhammad Ali with the Mamluk Beys ruling as British clients Just as happened 150 years later in the Suez Crisis, the British were expelled ignominiously and in the course of the campaign a large number of British troops were killed or captured. 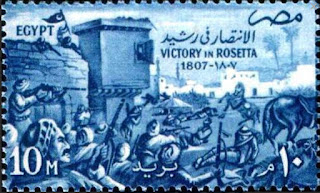 Two other issues are worth mentioning. A stamp was issued on 19 December 1957 to commemorate the 25th anniversary of the Egyptian Airforce. Cocking a snook at the West the stamp underlined Nasser’s growing closeness to the Soviet Union by depicting two types of Soviet aircraft - 2 MiG fighters and an Ilyushin. 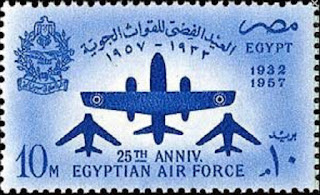 🇴🇲 There is a section in the Stanley Gibbons Commonwealth Catalogue which covers the stamps of Muscat And Oman, now The Sultanate Of Oman, during the period of its close relationship with Britain and when an Imperial Indian post office and then a British post office operated there (see Blog 438 Oman - Informal Empire).

Oman remained in effect a British protectorate until 1971 when it was clearly recognised as an independent state by being admitted to membership of the United Nations but it did not join The Commonwealth and from then onwards for sure, or from 1966 according to Gibbons, its stamps ceased to be required for inclusion in a collection of Commonwealth stamps.

However the country retained close links with Britain and a recent issue in particular highlights a peculiar relevance to its closeness to Britain and The Commonwealth. No sport says “Commonwealth” more than cricket does and Oman along with the United Arab Emirates was chosen to play host to the ICC Men’s T20 Cricket competition which originally was to have taken place in India, the 2020 competition in Australia having been abandoned because of the COVID-19 pandemic. The competition is taking place between 17 October to 14 November 2021 at stadiums in Abu Dhabi, Sharjah and Dubai as well as the Al Amerat cricket ground in Muscat. In relation to this sporting event, Oman Post has issued a miniature sheet containing a single stamp with the sheet depicting the cricket ground with the Omani national flag flying above it. The sheet also depicts the flags of the participating countries or national cricket organisations - Afghanistan, Australia, Bangladesh, England, India, Ireland, Namibia, Netherlands,  New Zealand, Oman, Pakistan, Papua New Guinea, Scotland, South Africa, Sri Lanka and West Indies.

I like this item and will add it to my Muscat and Oman collection as a footnote issue.