🇸🇴 Trawling through the internet auction sites, as is my wont, I came across this little gem. The dealer involved, I believe, has been offering the items for years but even in 2020 they are still being offered for sale. The items for sale purport to be official issues from the self-declared Republic Of Somaliland. The seller does not directly describe the items but uses an old cutting to give information about them (see below). The stamps are bogus and the information provided is fantasy. Somaliland, which has been an independent state de facto since 18 May 1991 though unrecognised as such internationally (apart apparently from Sheffield and Cardiff city councils!), has never (until very recently) had a functioning postal service and therefore has had no need of postage stamps (see Blog of 10 July 2010).
In the above mentioned Blog I described my contact by telephone with a British stamp dealer in 1998 who claimed to have been approached by the Somaliland government to produce stamps on its behalf and that the idea was hit upon to surcharge in Somaliland currency the 1p Royal Mail Machin Head definitive stamp to underline the links between Britain and Somaliland but the tale was told that the stamps were quickly withdrawn because they proved unpopular with the local population presumably because they depicted a portrait of the Head of State of the former colonial power. 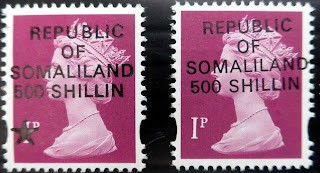 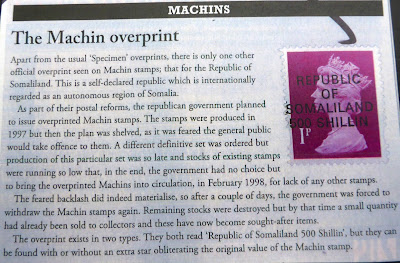 I recently came across a letter in my records which I received several days after the above mentioned phone call and it is shown below. The text of the letter states, “Dear Mr. _ , One of our guys flew Back from Africa on Friday & placed the enclosed in stock. He obtained them from a Dealer in Addis who Told Him His father in law sent them To Him from Somaliland. If you are interested they are .
No Star Double ovpt. (Block of four) £300
Star Double ovpt (Block of four) £300
He was told that they are probably Unique.
Yours sincerely,” 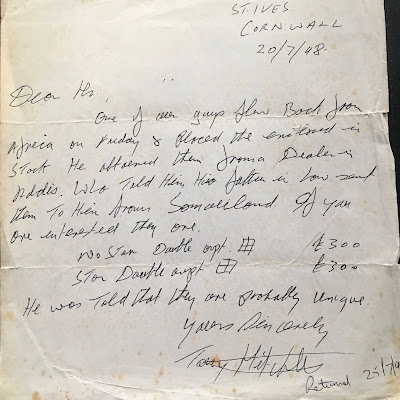 The reader will not be surprised to know that I was NOT interested in paying £600 for these items and I returned them to the sender by recorded mail. This was just as well as a few days afterwards the sender contacted me to ask me if I wanted the items and if not could I return them. I said that I had returned them by recorded post and did he want me to me to contact the postal authorities about what seemed like mail lost in transit but he did not wish me to do so. I was relieved that I had proof of dispatch in the form of the recorded mail receipt and I never heard any more about these items that had mysteriously gone astray in the mail.

These British Machin Head definitives ‘surcharged’ in shillins continue to pop up from time to time. As bogus items they are quite interesting if only because of the story that has built up around them. Whether or not they are worth £25 for the pair is for the potential buyer to decide.

The other interesting issue about them is the question, “Will Somaliland ever have a functioning postal service requiring genuine postage stamps.?” Given that many countries now seem to need functioning parcel and EMS services rather than a conventional letter service (see Blog 1682) one doubts whether the country would now need a mail service as we know it.
However there is a Facebook page for Somaliland National Postal Services and also a Somaliland Postal Service Twitter account. A Facebook comment in December 2018 which featured a photograph of the facade of the Ministry of Communication and Technology actually discussed the nature of A postage stamp’ but there was no follow up to say why that was relevant to Somaliland. 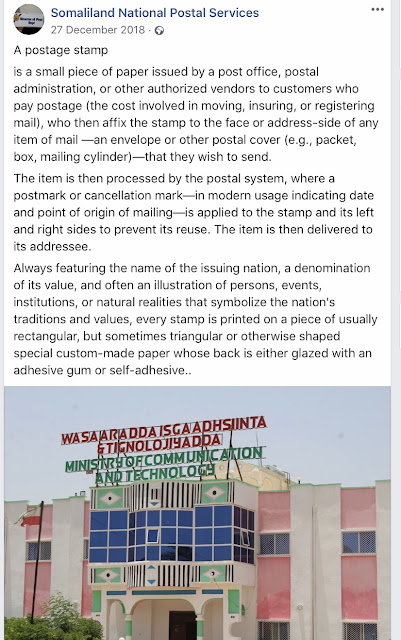 The previous day an item on Facebook had stated, “Why postal services is important” though the explanation was less than 3 lines in length. There was an accompanying photograph of what I assume to be a postal vehicle. 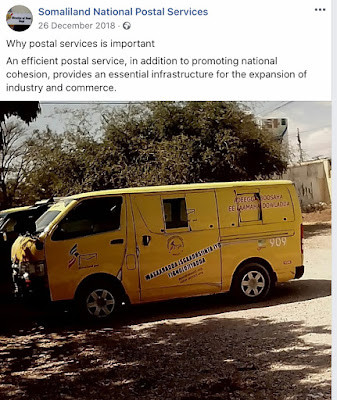 In March 2020 the Somaliland Standard published a report headlined ‘Somaliland: Ministry of Posts  Relaunches Postal Services”. The article stated, “The ministry of Posts yesterday reintroduced its first Postal Services after hiatus of more than three decades. Mr Abdiweli Sufi Jibril had the cut the ribbon  of the first of its kind postal service at the ministry of posts premises . The postal services fell into disuse during the 1988 war in Somalia. The resumption of SL’s first postal service is spearheaded by the current administration headed up by the incumbent president Musa Bihi Abdi. The office is fully furnished and has postal home delivery vehicles. The minister speaking during the launching ceremony had reiterated that the staffers were available at the posts offices who are responsible of delivering more than 100 parcels and mails across the provinces of Somaliland”.
The article was accompanied by 2 photographs depicting the ribbon-cutting ceremony and one of them included 2 motor bikes with riders in uniform sitting on them. It is likely, judging by the EMS symbol at the top left of the second picture, that the postal services are centred on an Express Mail Service which seems to be of prime importance, along with parcel delivery services, in the development of postal services in many developing countries. There is no mention in the article of the release of postage stamps to be used by this ‘first its kind postal service’. I assume that if the emphasis of the nascent postal service is on EMS and parcels then, were it to consider the issue of postage stamps to be necessary, face values would necessarily be high. 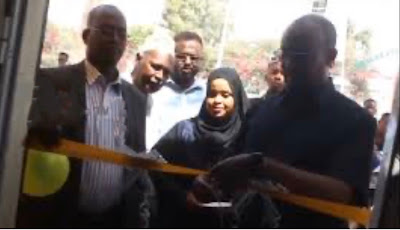 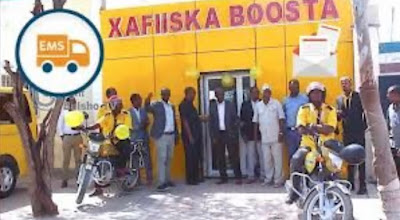 Somaliland sits in a strategically important spot at the Horn of Africa and various regional and international powers are jostling with each other to establish themselves in the region. Turkey is keen to extend its power in the area and has been courting the Somaliland government and one of the results is that in January 2020 it added Somaliland to its list of ‘countries’ to which it would send mail.
Another country with which Somaliland is forging links is the generally unrecognised Taiwan which from time to time is in philatelic competition with The People’s Republic Of China in finding countries which are prepared to accept gifts of postage stamps which emphasise the ties between either of the two Chinas and the recipient countries (several small Commonwealth Caribbean and Pacific countries fall into that group). Perhaps Somaliland’s first postage stamps may be a gift from Taiwan. This is a recent Tweet from the Somaliland Ministry of Foreign Affairs:- 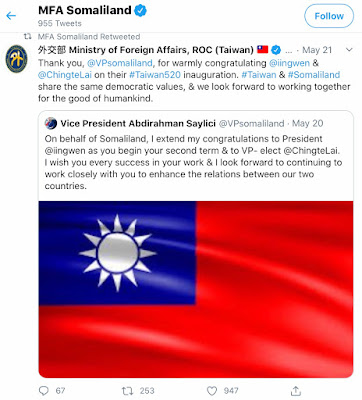 Somaliland is also doing its best to persuade the western nations to recognise it and keen to emphasise its former close links with The United Kingdom though one Tweet from the Somaliland Ministry of Foreign Affairs may have been overdoing when it complained about the refusal of a USA visa to the British prime minister’s girlfriend:- 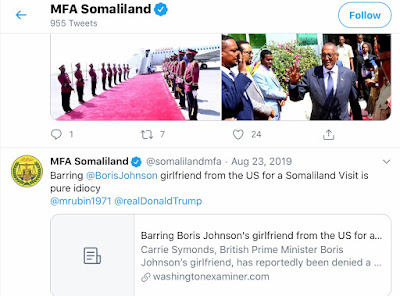 Perhaps Royal Mail would like to give a hand to Somaliland in developing its postal services.

2021 will see the 30th anniversary of Somaliland’s very real independence and if the country can do without postage stamps for 30 years it is hard to see that it will ever need any in the future but it seems that developments are taking place there which may well result in ‘Somaliland’ making its return to the stamp album. But not in the form of bogus rubbish please.
Posted by White Knight at 03:16