🇱🇰 Sri Lanka Post issued a single stamp on 4 February 2018 to commemorate the 70th anniversary of the country's achievement of independence from The United Kingdom.

On 4 February 1948 the country became The Dominion of Ceylon with King George VI as the country's monarch and DS Senanayake as the first prime minister of the country. On 6 February 1952 Queen Elizabeth II became the country's monarch until the country became a republic in 1972 and changed its name to Sri Lanka. The election of JR Jayawardene in 1977 led to the introduction of a new constitution the following year when the country adopted the name of the Democratic Socialist Republic Of Sri Lanka though fortunately the country's stamps continue to bear the inscription 'Sri Lanka' thus avoiding a nightmare for designers who do not have to fit the full name in their stamp designs (though they do have to incorporate the short name in 3 different languages).

Not the most exciting of designs perhaps but an important issue. Rating:- ***. 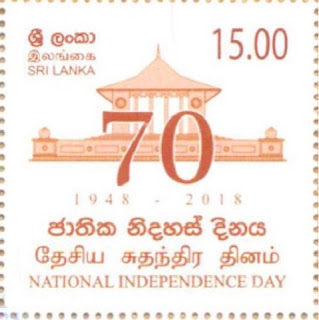 🇲🇿 There had been a suspicion that Correios Moçambique may have ended its contract with the Lithuania-based philatelic agency called Stamperija which is detested by many collectors because of its production of very large numbers of paraphilatelic products in the name of its client territories because no products with the name of Mozambique printed on them seemed to have been 'issued' since February 2017. Well, don't hold your breath, Stamperija is still there.
A whole new load of products have been released from Stamperija with the name of Mozambique printed on them and the stated date of 'issue' is 15 February 2018. The issue takes the form of 10 sheetlets each containing 4 different 'stamps' and 10 miniature sheets and the depicted subjects are:- Water birds, Pandas, Killer whales, Fish, Elephants, Dogs, Cats, Dinosaurs, Parasitic insects and Butterflies. Rating:- 0. 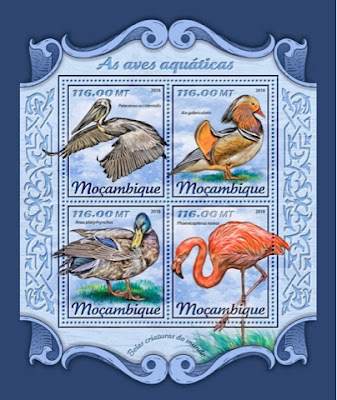 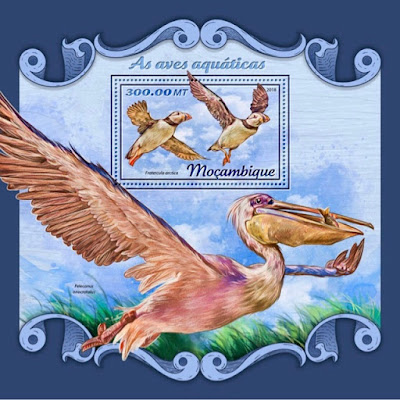