Isle of Man Stamps And Coins will issue a set of 8 stamps titled "Pomp And Circumstance" on 18 June 2015 to commemorate the reign of Queen Elizabeth II as she approaches the date of her achievement of being the longest reigning English monarch on 9 September 2015. Each stamp features highlights of the Queen's reign including her coronation, the investiture of the Prince Of Wales and her silver, golden and diamond jubilees.
This is a historic and attractive set but I wonder if it would have been better and more respectful if the date of issue had been delayed for another 3 months till the date when the Queen actually achieves her historic record. Then again, the Isle Of Man postal administration has been very keen in recent years to be the first out of the starting blocks with an issue to commemorate contemporary events as we have seen with the births of the royal babies and the wedding of the Duke and Duchess of Cambridge. Royal Mail has sensibly delayed the issue of its set to commemorate this anniversary until the event itself has occurred which seems to be the most sensible and respectful approach to this issue - after all the Queen only achieves the record reign when the actual date has arrived so a little patience does not hurt.

Royal Mail will issue another of this year's important and historic sets on 18 June 2015 to commemorate the Bicentenary of the Battle of Waterloo which saw the final victory of Great Britain and its allies over the  tyrant, Napoleon Bonaparte, self-proclaimed Emperor of France, who had plunged the whole of Europe into a war whereby the continent had seen no peace for 20 years. 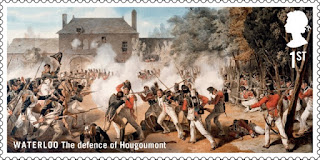 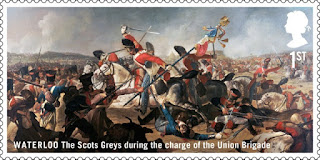 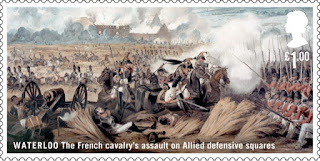 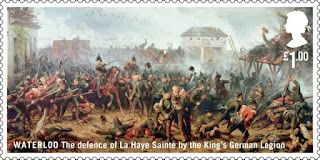 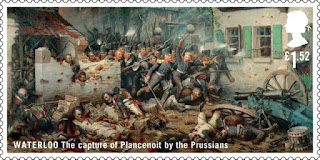 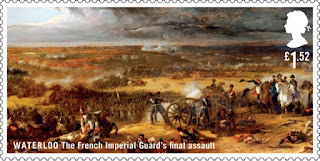 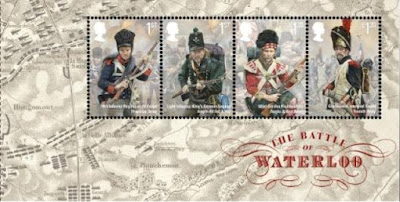 The cover of the prestige booklet depicts the leader of the British forces, The Duke of Wellington, who really deserved to feature on an actual stamp, alongside Bonaparte, depicted as looking smug, overweight and arrogant. The panes are made up of the 4 soldiers stamps which appear in the miniature sheet, 4 of the battle scene stamps, the 2 remaining battle scene stamps and finally a pane which is made up of 8 Machin Head definitives - 2 x 5p, 2 x10p, 2 x50p and 2 x £1. This is an excellent issue from Royal Mail - beautifully produced, interesting, meaningful and of great historical significance.
We forget that the Napoleonic Wars were actually a World War fought on many continents; Bonaparte brought much misery to Europe. This issue is a justifiable and proud commemoration of the final defeat of a little man in a big hat (always dangerous) who brought untold misery and suffering to the whole of Europe and the deaths of many thousands of its inhabitants. 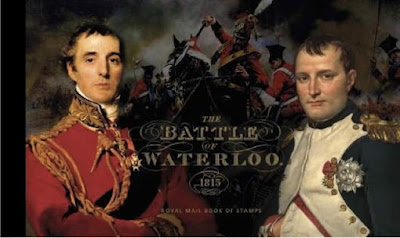 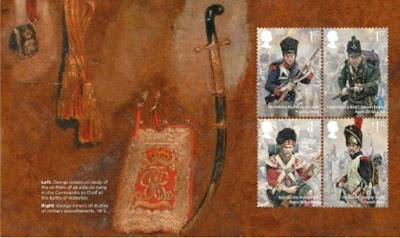 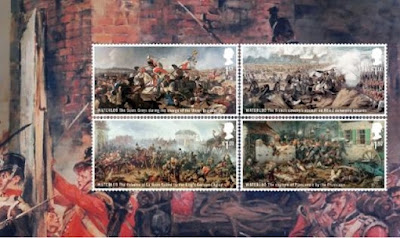 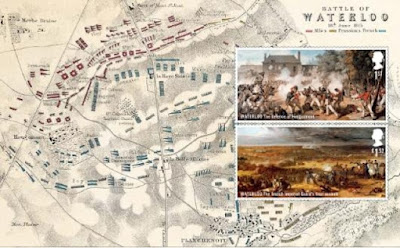 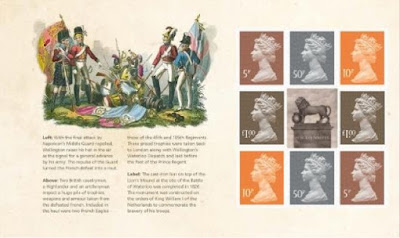