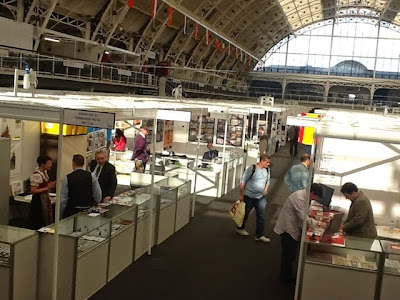 Of particular interest on the second day of the Europhilex Stamp Exhibition 2015 (see Blog 570) was a talk given by Hugh Jefferies, the editor of the Stanley Gibbons Stamp Catalogue. It was a fascinating insight into the catalogue's history and the pressures that arise on a catalogue editor.
Towards the end of the talk the editor dealt with the question of the undoubted excessive number of stamp issues with which the stamp collector is faced in this current philatelic era. He stated that there were really two types of modern stamps - the sort which postal administrations issued for use on mail and the sort which postal administrations released for purchase by stamp collectors and that the postal administrations frequently did not understand that it was the first type in which collectors were often more interested. Sometimes it can be years before the existence of some stamp issues become known to the catalogue editor.
He made the significant point that those who put the catalogue together could not always be sure that some of the stamps produced by agencies were actually on sale at post offices counters in the countries whose names appeared on the stamps. However, generally, if a stamp is sold at a country's philatelic bureau then it is usually placed in the main listing of the catalogue. He qualified this by saying that if sets were issued by some countries which had subjects which had absolutely no relevance to those countries then those sets were likely not to receive full catalogue status. If, for instance, an island in the West Indies released a set the subject of which was an American or British television programme which had nothing to do with that island then that set was unlikely to receive full catalogue status but if that island issued a set on, say, "turtles of the Caribbean" then that had a much greater relevance to the island and would mot probably receive ful catalogue status.
This clearly states the editor's approach to listing of new issues and is a welcome clarification of the current (and highly sensible) policy of the allocation of places in the Gibbon's Catalogue of modern stamps. The editor's talk confirms the impression described in Blog 538 that excessive new issues from some countries which have subjects which are irrelevant to those countries are being relegated to the catalogue's appendix. So at least collectors now know that a "Downton Abbey" sheetlet from a Caribbean, African or Pacific territory is unlikely to enter the main body of Stanley Gibbons Catalogue but issues featuring local or regional flora and fauna will probably receive full catalogue status.
The editor was asked about the likely catalogue status of the Royal Mail miniature sheet which had been issued to be sold in a pack well above face value only at the Europhilex exhibition and in a limited edition of 7500. Not surprisingly the editor stated that the item was unlikely to receive full catalogue status. Despite this dubious future catalogue status we might note that the pack is currently being offered on the Internet in the price range of £40 to £50!
The chance to hear Hugh Jefferies' thoughts on the Gibbons Catalogue's past, present and future made the trip to Europhilex well worthwhile and gave his audience a very interesting half-hour. 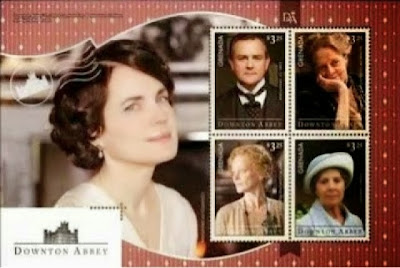 On a repeat visit to the Post And Go kiosks I found them remarkably quiet although the Royal Mail stand had a queue of several people waiting to buy items. I suspect, however, that what the Post And Go kiosks lose in numbers of customers is made up by dealers buying large quantities of the labels. The only person in the single queue ahead of me bought 16 Collectors' sets of the Machin Head labels with the Europhilex/Penny Black inscription as illustrated below. The Machin Head strip I bought yesterday had the MA13 code but I obtained a strip today which had no code. The Post And Go machines therefore continue to produce labels entirely randomly thus adding to the general dissatisfaction among collectors as the numbers of items available to us mounts up:-

Interestingly, on both of my visits to the Post And Go kiosks, and having spent several minutes lurking there, I did not see a single person show any interest in the Jersey, Guernsey or Gibraltar kiosks. Perhaps I was there at the wrong times.
I visited the exhibition post office (as opposed to the Royal Mail stand) and prepared a cover so that I could obtain the new Horizon label depicted below. The minimum price was 91p which covered the Large Letter rate (even though my own cover was rather small in size) and now I must await its arrival when I return home tomorrow to see in what state the postman delivers it. He has currently developed a habit of folding everything in half and ramming every cover through the letter box with as much force as possible. The chances of this happening increase if the cover has attractive stamps stuck to it or if the sender has written "Please do not fold" on it - I suppose it's my own fault for not giving him a tip last Christmas.