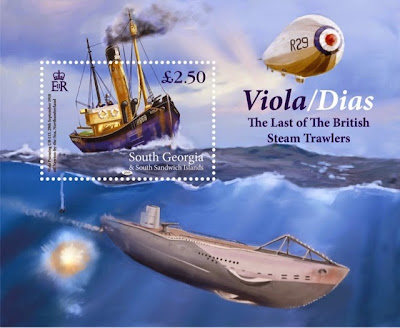 Pobjoy Stamps has announced yet another superb stamp issue from South Georgia And The South Sandwich Islands which is on the subject of the Viola/Dias which was the last of the British steam trawlers. The Viola was built for the Hellyer Steam Fishing Company in 1906 in Beverley in Yorkshire and floated down to Hull where it was fitted with its steam engines. The Hellyer Company named much of its fleet after Shakespearean characters so this issue is a unusual addition to a thematic collection on the subject "Shakespeare" or "Theatre". 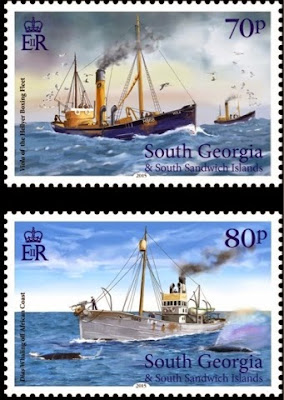 The Admiralty requisitioned Viola in September 1914 at the outset of the First World War and renamed her Viola III (FY614) and armed her with a 3 pound gun and the boat was moved to Shetland and involved in the search for U boats. Later, with other armed trawlers she was involved in actions which resulted in the sinking of at least 2 German submarines - the UB30 off Whitby on 13 August 1918 and the UB115 off the Northumberland coast on 29 September 1918 - this latter action is depicted in the miniature sheet depicted above.
After the war Viola was sold to a Norwegian firm and renamed Kapduen and subsequently Dias and was used for whaling off the African coast. She was then sold to an Argentinian firm and moved to Grytviken in South Georgia where she was involved in sealing and as a support vessel for expeditions up to 1964 when the whaling station at Grytviken was closed down and the little vessel was laid up. In 1974 the Dias foundered at her moorings but in 2004 a project was begun to restore and refloat her along with another ship, the Albatross. Both ships were beached and plans to preserve the noble little ships are ongoing.
This issue beautifully commemorates the Viola/Dias whose history is of great interest and immense relevance to South Georgia and the miniature sheet especially is an extremely interesting addition to a collection of stamps on the centenary of the First World War. The design and artwork by Andrew Robinson and lithograph printing by BDT International are truly excellent as we have come to expect from the Creative Directions/Pobjoy Stamps stable - these are highly collectable new stamps:- 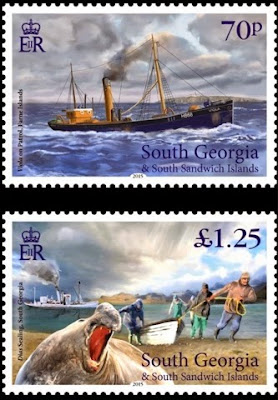 In addition to the basic 6 stamps which will be issued by Royal Mail on 14 May 2015 to commemorate the centenary of the First World War (see Blog 548), a "Prestige Booklet" (cost £13.96p) will also be released. The booklet contains 4 different panes - the first includes a new printing of one of the 1st class stamps of the 2007 "British army uniforms" set which depicts an observer of the Royal Field Artillery (dated 1917). That particular stamp had already been included in pane 2 of the £7.66p prestige booklet which was issued along with the 2007 set but with one each of the other two 1st class values of the set and so the 2015 booklet gives us a third version of this particular stamp.
Panes 2 and 3 of the 2015 booklet contain one each of the new stamps and pane 4 contains new Machin Head definitives - 2 x 1p, 2 x 5p, 2 x £1.33p - and 2 of the 1st class poppy "definitive" stamps of 2012.
I have long considered giving up collecting the Royal Mail prestige booklets because of the ever increasing cost of the items but they really are such excellent additions to my British stamp collection that I continue to buy them and obtain pleasure from looking at them in my album:-


It becomes increasingly difficult to work up any excitement at the news of new stamps from Australia Post since they appear so frequently but cat lovers will probably enjoy the set of 5 cat-themed stamps due to be released on 5 May 2015 as previously detailed in Blog 555. One of them is depicted below:- 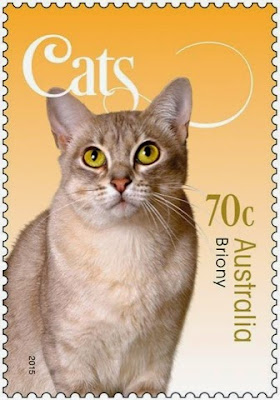 Some of us may struggle to find a link between the Battle of Waterloo or the American astronaut Buzz Aldrin and Maldives but Stamperija has had no such problems and has included the 2 subjects in its latest outpouring of philatelic items which have the name of Maldives printed on them. Stamperija has announced proudly that it has issued another 10 sheetlets each containing 4 different "stamps" and 10 accompanying miniature sheets on the above 2 subjects plus Nelson Mandela, Boris Pasternak, Ludwig van Beethoven, Elvis Presley, Ingrid Bergman, Frank Sinatra, Chess players and the 70th anniversary of the end of the Second World War. Stamperija states that the "first day of issue" was 15 April 2015:- 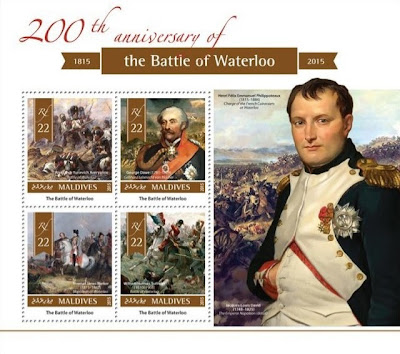 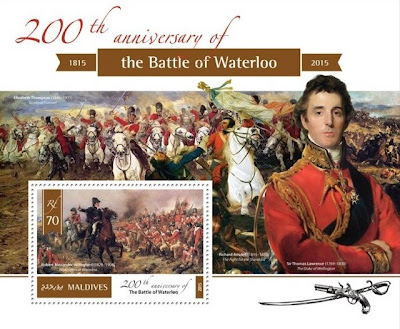 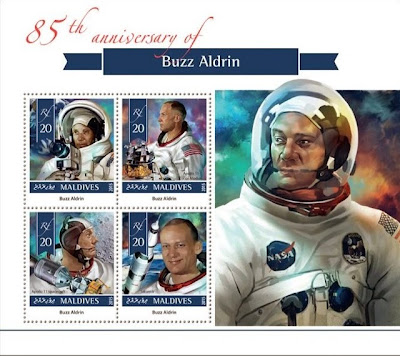 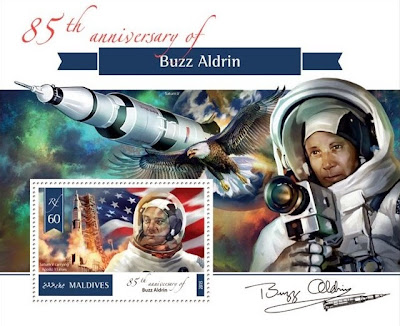