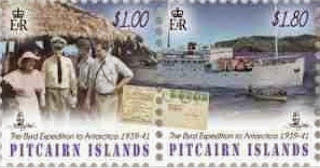 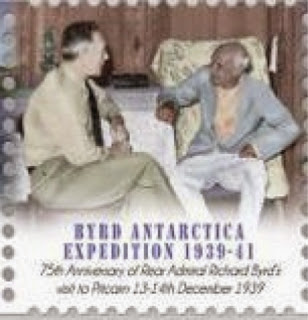 Pitcairn Islands issued a se-tenant strip of 4 stamps with a label at the centre of the strip on 11 December 2014 to commemorate the 75th anniversary of the visit of the Byrd Antarctic Expedition to Pitcairn. The ship USMS North Star en route for Antarctica called in at Pitcairn on 13 to 14 December 1939 to take on water supplies. Pitcairn was short of vital food supplies at the time because normal delivery ships were not calling at the island because of the risk of them being attacked due to the onset of the Second World War. The North Star was carrying large supplies of the much needed commodities and was able to satisfy the islanders' needs.
The expedition was led by Rear Admiral Richard E. Byrd. During the time that the supplies were being ferried to Pitcairn from the North Star, members of the crew designed a cachet for the island which was mimeographed on to government stationery. There was also a second cover which had been produced by the manufacturers of the "Snow Cruiser", a vehicle which had been produced for use in the Antarctic. 794 covers with the North Star cachet were used on the island but there were not enough postage stamps available to service all the covers and so a number were verified by the application of the initials of the post master, Richard Edgar Christian.
The new stamps were designed by Denise Durkin and lithographed by Southern Colour Print:- 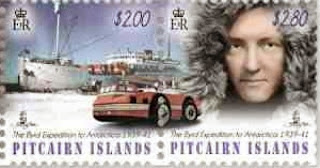 There has been the issue of an interesting set of 4 stamps from St. Kitts which depicts artwork by local schoolchildren. I do not yet know the date of issue of this set but it is noteworthy that it is clearly a local issue actually intended for use on local mail rather than being issued by its philatelic agents largely for direct sale to stamp collectors with only minimal chance of receiving use on post within the country. The face values are also very interesting - three very low values of 10c, 15c and 30c and a high value of $50. The set commemorates the "UNESCO Sponsored Human Rights Sensitisation Project For Persons With Disability":- 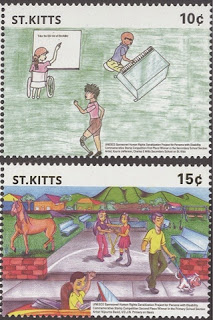 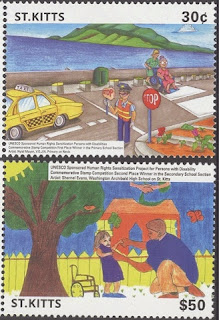 On 23 October 2014 Zambia issued 20 stamps (4 se-tenant strips each of 5 different stamps) and 2 miniature sheets (1 of 5 different stamps and the second containing 2 different stamps) to commemorate the country's 50th anniversary of independence. One miniature sheet concentrated on featuring the country's first president, Kenneth Kaunda, and the second featured the then current president, Michael Sata who died in office on 28 October 2014, 5 days after the issue of the stamps. There are many interesting and historical photographs featured on the stamps and I note that the former British primeminister, Margaret Thatcher, is depicted on one of the miniature sheet stamps dancing, I think, with President Kaunda. 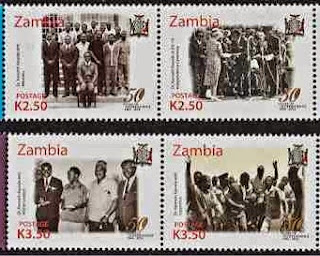 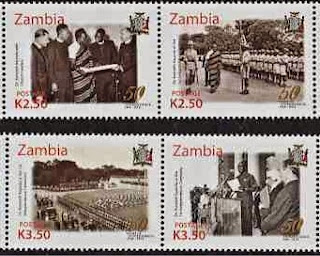 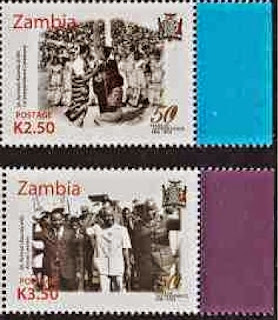 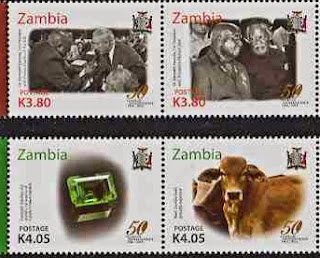 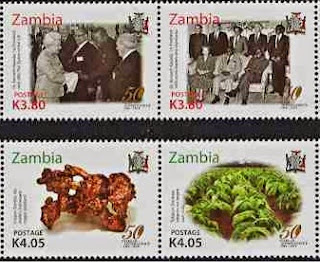 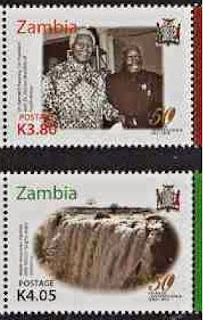 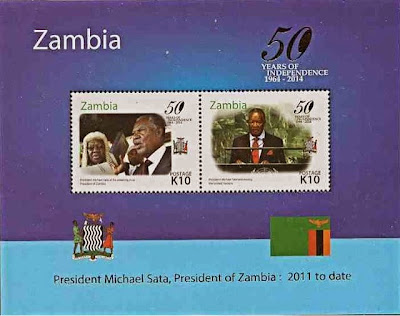 Guernsey Post will join the postal administrations of The Isle Of Man and Gibraltar in releasing a set of stamps on 28 January 2015 to commemorate the lunar new year, this time "The Year of The Goat". Why? The lunar new year is of no relevance to Guernsey and yet it appears to warrant the release of no less than 6 stamps and 1 miniature sheet. I have no intention of buying this particular issue and will simply write a footnote in my collection to indicate its omission and, by the way, the £7.46 which I will have saved by not buying it. 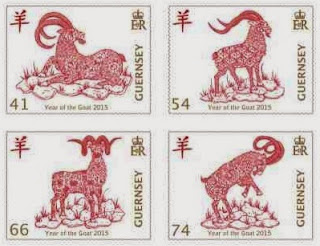 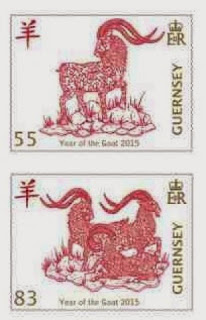 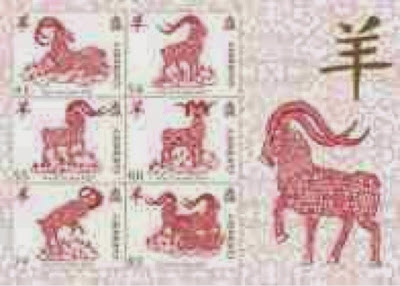 After a short Christmas break Australia Post will be back with a vengeance in the new year of 2015. There will be 6 new issues released by Australia Post between 7 January and 17 February and none of them commemorate a significant national anniversary or significant local current event.
The first of these issues to appear on 7 January 2015 will be inscribed "Christmas Island Australia" and inevitably will commemorate the lunar new year. The issue will consist of 2 gummed stamps, 1 miniature sheet, 1 prestige booklet (cost $14.95 although the face value of stamps contained in the booklet is only $14), 1 "Zodiac" miniature sheet and 1 "silk miniature sheet pack" (cost $25) - the total price of these basic items for this issue is $51.15 which is equal to £26.69p. The issue was designed by Dani Poon and lithographed by McKellar Renown:-

Very little time will then pass until the issue of a $5.70 (£2.97) miniature sheet on 22 January 2015 which contains 2 stamps to commemorate the first Victoria Cross to be awarded to an Australian during the Second Boer War of 1899 - 1902 (no obvious anniversary commemorated as far as I can see). The m.s. was designed by Simone Sakinofsky and lithographed by McKeller Renown:-

On 17 February 2015 an issue titled "Era of Sail" which features clipper ships will be released. The issue consists of 4 gummed stamps and, apparently, no self-adhesive versions which means that the cost of the set will be only $4.20 or £2.10p):-

It therefore seems that if there are still any new issue collectors left who collect "one of everything" they  will find that Australia Post will be asking for a total sum of £82.44p for them to continue their collecting habits for the first 6 weeks of 2015. If Australia Post continues with this new issue policy throughout the year then the collector will face a bill of several hundred pounds to keep his or her Australia collection up to date. How will it all end?