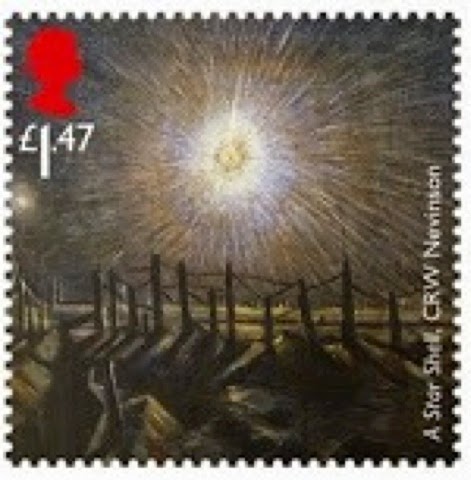 I have recently visited the excellent Barber Institute Art Gallery in Bimingham where I heard a very interesting lecture on, and looked around a small exhibition of, First World War art by Christopher Nevinson, one of the most important war artists of the time. Included in the fascinating display of his art  was the painting A Star Shell which is one of the 6 designs which make up the excellent set of stamps  issued by Royal Mail to commemorate the centenary of the beginning of The Great War. I was interested to see that the stamp design is only a detail of the whole painting as is shown by the postcard which I was able to buy from the gallery shop:- 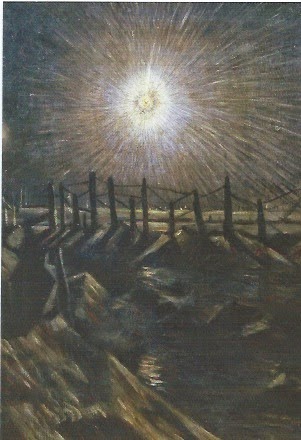 The painting also appears on the leaflet put out by The Barber Institute which promotes the exhibition. The title, Rebel Visions, refers to Nevinson's pre-war, short-lived membership of the Rebel Art Centre which was founded by Wyndam Lewis who also became a notable war artist and given that Royal Mail intends to include one stamp per set on the subject of war art in its future World War I issues, I presume a work by Lewis will be featured on a future stamp.

There are a number of World War I pieces by Nevinson which are worth mentioning among which is  A Group Of Soldiers which the artist painted in 1917. This painting is interesting because the British censor did not approve of it on the grounds that "the type of man represented is not worthy of the British army" even though Nevinson insisted that the featured men were all characters that he had encountered on the London Underground:- 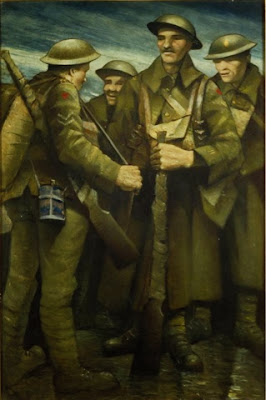 The painting depicted below, La Mitrailleuse, was exhibited in March 1916. It depicts four soldiers grouped around a machine gun in a trench - one of the men lies dead beneath the gunner. The picture is part of the Tate Gallery collection:- 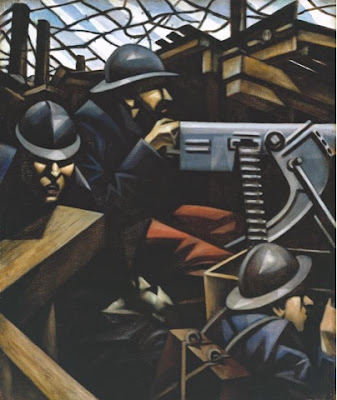 The painting below is called The Harvest Of Battle and is dated to 1918. It depicts injured soldiers being helped across the scarred battlefield by their comrades with corpses strewn all around them. It is a strong portrayal of the war in France - probably too strong for it to provide the basis of a stamp design:- 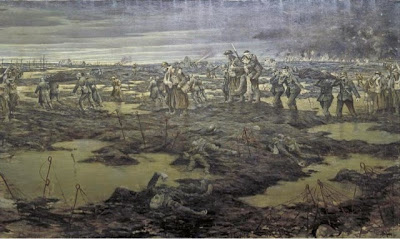 One painting that is even more unlikely to appear as a design on a stamp is Paths of Glory which was painted in 1917. Two dead soldiers lie in the mud tangled on the barbed wire of the battlefield. The painting was felt inappropriate for exhibition but Nevinson had the painting exhibited nevertheless but placed a diagonal strip of brown paper with "Censored" written on it across the images of the dead soldiers. The artist received an official reprimand for displaying the work and using the word "Censored" without official authorisation:- 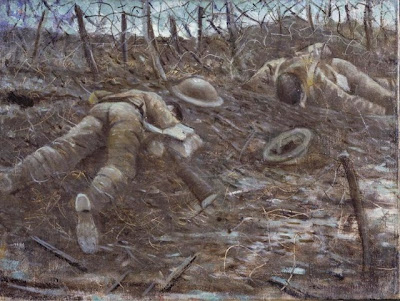 Over the next five years Royal Mail plans to issue an annual set of stamps on the subject of The First World War and I imagine each set will include an art stamp. The choice of the work of art to be depicted on the stamps seems to be very difficult given the number of accomplished artists whose work could be featured on the stamps and the powerful nature of the subject. I look forward to adding more of Royal Mail's World War I stamps to my collection over the next few years.
To complete this Blog, I offer three cheers for Royal Mail for not only reproducing important contemporary World War I art on its stamps but also for commissioning new art to include in the set - this year Royal Mail depicted F. Strickland's lovely poppy painting on its 1st value stamp and now a print of the stamp has been distributed to its Philatelic Bureau regular customers as a Christmas gift. This attractive item, shown below, is a much appreciated acknowledgement of its customers' loyalty but I just have one slightly ungrateful point to make and that is that it would have been even more special if the poppy stamp had been used on the envelope in which the print was sent to its customers rather than using a stamp-less cover.
It might also be a good idea to try to avoid including a poppy in future designs because, although I appreciate the significance of its depiction, the poppy icon's appearance on recent stamps is becoming just a little over-used and cliched. But I do very much like F. Strickland's design and I am delighted to find a place for the print in my collection. 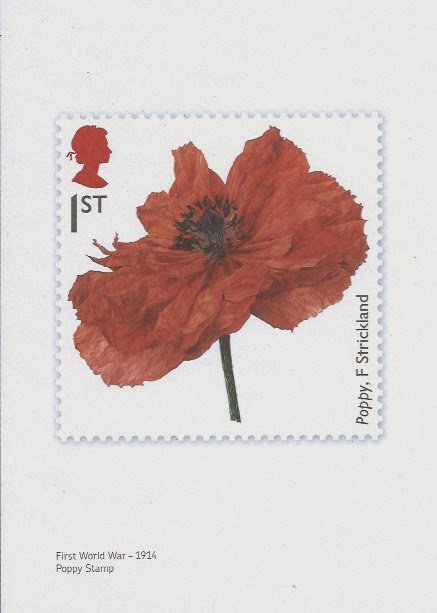