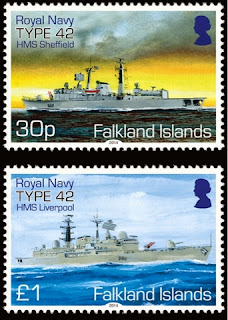 Falkland Islands will issue an excellent set of 4 stamps on 22 December 2014 on the subject of Royal Navy Type 42 destroyers which have been connected with the islands from 1975 to 2013. The issue commemorates the return of HMS Edinburgh to its home base in Portsmouth in March 2013 which marked the end of the operational life of the Type 42 destroyers. The Type 42 destroyers were designed in the 1960's with HMS Sheffield being the first to be ordered in 1968 and launched in 1971 and commissioned in 1975. In all 14 Type 42 destroyers were built for the Royal Navy.
Seven Type 42's participated in the liberation of the Falkland Islands from the occupation by Argentinian forces in 1982 and two, HMS Sheffield and HMS Coventry, were lost while HMS Glasgow was damaged. These facts alone justify fully the philatelic commemoration of these ships by the Falkland Islands Post Office. The excellent designs are by John Batchelor MBE and the stamps were lithographed by BDT International:- 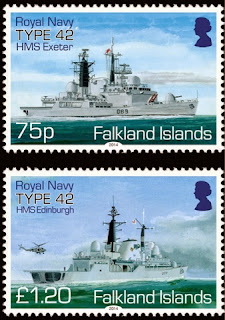 While The Falkland Islands, under the guidance of Pobjoy Stamps, continues to produce excellent, relevant stamps in a sensible, well judged new issue programme,  Jersey Post, plans a programme of an excessive number of new issues for 2015, some of which at least will make collectors scratch their head in puzzlement. Thus, in its 2015 new issue programme, those responsible for Jersey's new issues have selected an issue on "Dragons" to start off the year (proposed date of issue 6 January 2015). Subsequently there will be another 14 issues during 2015:-
18 February 2015 - new definitives (the Jersey Crest);
24 March - Europa - Traditional toys;
24 April - 25th anniversary of The Hubble Telescope;
9 May - 70th anniversary of the liberation of Jersey from German occupation - Sir Winston Churchill;
15 June - 800th anniversary of Magna Carta;
27 June - The Island Games;
10 July - 75th anniversary of the Battle Of Britain - Sir Winston Churchill;
4 August - Centenary of the First World War (2nd issue);
6 August - 450th anniversary of Sark as a Fief of The Crown;
11 September - Achievement of Queen Elizabeth II as the longest reigning British monarch;
22 September - Links with China - Garden flowers;
15 October - Seasons - Autumn;
4 November - "My Jersey"
27 November - Bosdet's stained glass windows.
Collectors will draw their own conclusions about the subjects featured in this programme. Clearly Sir Winston Churchill has been identified as a subject which can be exploited to sell not one, but 2, sets of stamps to collectors. We might also note that the above programme does not mention plans for sets of "Post And Go" labels which will add to the number of items to be bought and of course to the burden on collectors' pockets.
As I have mentioned in a previous Blog - because of what I see as Jersey's release of excessive numbers of issues I shall only buy stamps from Jersey which commemorate notable local events and anniversaries so quite a large percentage of the above will not find its way into my Jersey collection. If only these offshore islands would return to the sort of sensible new issue programmes which the Pobjoy Stamps territories have adopted.
Sri Lanka issued a single stamp on 31 October 2014 to commemorate Ray Wijewardine who was a notable agriculturalist:- 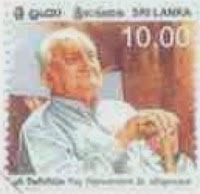 Many people have been struck by the similarity of the comet (known as 67P/Chuyumov-Gerasimenko) on the surface of which the European space craft, Rosetta, has landed its probe, Philae, to the rather forbidding-looking Planet of the Clangers which was featured on a Royal Mail stamp issued on 3 September 1996 as part of a set of five which commemorated the 50th anniversary of children's television in Great Britain. The Clangers' planet is a small rocky lump in space, surrounded by satellites which, like Rosetta, seem to have been sent by aliens such as Earthmen, to investigate the place. The Clangers are charming, mild-mannered creatures which are a cross between a rodent, an aardvark and an old pink sock, but I suppose if you live on a small rock in space you do rather become very accepting of what life throws at you.
Personally I think that "Planet of The Clangers" would be a much better name for the comet than that which it has been given officially. I rather like the idea of the scientists who are monitoring the results coming from their studies on the comet suddenly catching sight of a little collection of mild-mannered, curious long-nosed pink rodents running into the view of their camera lens.
Apart from the Clangers themselves, another inhabitant of the planet is the Soup Dragon which has not yet appeared on a stamp but perhaps Jersey will take the opportunity to include it in its upcoming "Dragons" set. 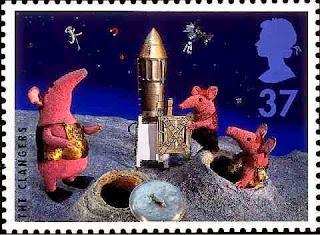