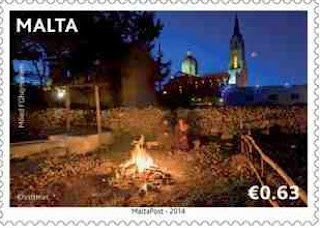 MaltaPost will issue an interesting set of 4 stamps on 17 November 2014 for use on Christmas mail. The designs depict scenes from the live crib in Gozo - Bethlehem f'Ghajnsielem - a yearly production staged by the inhabitants of Ghajnsielem on the island of Gozo. The event retells the Christmas story beginning with Mary and Joseph's journey from Nazareth to Jerusalem and ending with the Epiphany of the wise men. The 63c depicts Ghajnsielem Church. The set was designed by MaltaPost from photographs by Daniel Cilia and lithographed by Printex. While 1.3 million copies of the lowest value, the 26c, have been printed, only 26,000 of the top value, the €1.16, will be issued:- 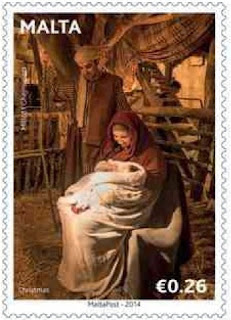 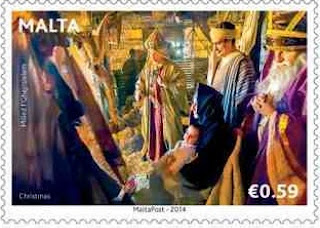 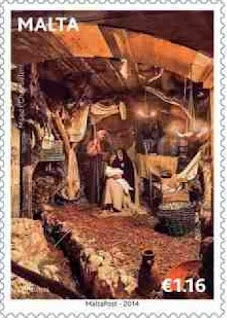 The first issues of 2015 from Isle Of Man will be:-
2 January 2015 - 50th anniversary of the death of Sir Winston Churchill - 8 stamps (total face value £6.34p);
17 February 2015 - 70th anniversary of the end of the Second World War - 1 miniature sheet (face value £3.50);
17 February 2015 - Centenary of the First World War - Battle fronts - 6 stamps (total face value £5.77);
17 February 2015 - 175th anniversary of the Penny Black - 6 stamps (total face value £6.43).
Thus in just the first 6 weeks of the new year, this small island in the Irish Sea is intending to release 20 new stamps and 1 miniature sheet with a total face value of £22.04. Presumably those responsible for the island's philatelic programme are starting the year as they mean to go on. I have no idea how popular the island's new issues are now but I for one will be restricting my purchases of Manx stamps to only those items which commemorate important local events and anniversaries; something I have already been doing with my Jersey and Australia collections and have saved a pleasingly large amount of money as a result without feeling that my collection is any the worse for it.
Singapore Post issued a set of 5 stamps on 31 October 2014 on the subject of local tourist attractions:- 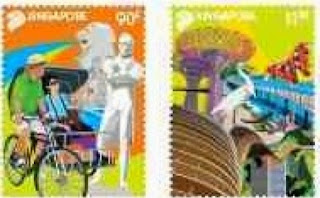 Despite the serious and highly disruptive postal workers' strike in South Africa, now in its fourth month, the South African Post Office has still managed to issue a self-adhesive sheetlet of 5 different stamps on the subject of its own parcel service. The item was designed by Marcus Neustecher and issued on 9 October 2014. Apparently the sheetlet can be folded up into the form of a parcel though why any stamp collector would want to do so is a mystery which the South African Post Office has not attempted to answer. Presumably it is rather more concerned about finding a way to get the the postal workers back to normal working. 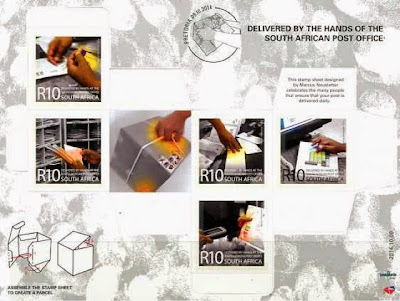