310. The Gambia Leaves The Commonwealth. 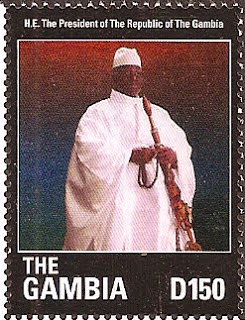 The decision reflects the degree of pressure on the President who seized power in a coup in July 1994 (see Blogs of 18 April 2012 and 29 August 2012) and since has grown increasingly despotic and subjected to criticism for his behaviour. With the upcoming CHOGM in Sri Lanka, his behaviour may have been subjected to even more international scrutiny and the withdrawal of The Gambia from The Commonwealth may be seen as reducing his exposure to such examination and possible comment.
Interestingly, President Jammah seems to have an impressive scientific talent as he claims to have found the cure for both AIDS and diabetes although his own wife had to fly to The United States for treatment of her diabetes!
The production and issue of stamps for The Gambia has long been in the hands of a large New York-based philatelic agency and for many years has been typified by excessive numbers of issues which rarely have any relevance in subject matter to The Gambia itself. I have only rarely bought any of these issues and so the country's withdrawal from The Commonwealth will have very little effect on my Commonwealth stamp collection. 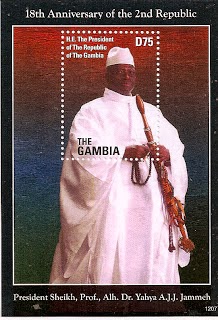