🇦🇺 Australia Post issued a third Olympic Games gold medal winner stamp on 28 July 2021 to commemorate Kaylee McKeown who won a gold medal in the Women’s swimming 100 metre backstroke event. The stamp was produced and sold in a sheetlet of ten. The Australian team has now won 6 gold medals so there are at least 3 more gold medal stamps pending. Rating:- ***. 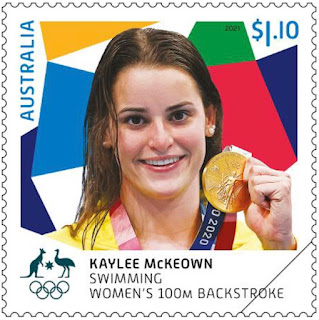 🇧🇩 Bangladesh Post issued a single stamp on 27 July 2021 to commemorate the 50th anniversary of the birth of Sajeeb Ahmed Wazeed Joy, a Bangladeshi Awami League politician and businessman, who just happens to be the only son of the prime minister, Sheikh Hasina, and the eldest grandson of the founding father of Bangladesh, Sheikh Mujibur Rahman. No political bias there then. Rating:- **. 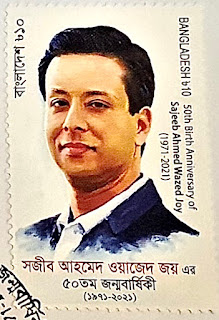 🇭🇰 The next issue from Hong Kong Post will be released on 25 August 2021 to commemorate the 80th anniversary of the Hong Kong postal service.  The issue is made up of 6 stamps and 1 miniature sheet. Further details to follow. Rating:- **.