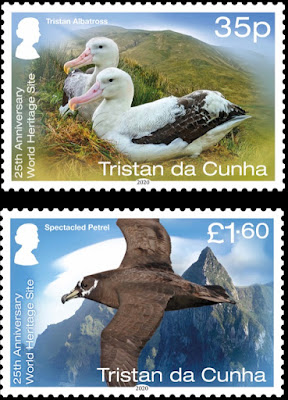 🇸🇭 The postal service of Tristan Da Cunha will issue an excellent set of 4 stamps and 1 miniature sheet depicting birds on 24 March 2020 to commemorate the 25th anniversary of the establishment of
Gough Island and Inaccessible Island as UNESCO World Heritage sites. Designed by Andrew Robinson from photographers by Michelle Risi, Andy Schofield, Jaimie Cleland and Chris Jones and lithographed by Cartor and perforated 13.5 x 13 with production coordination by Creative Direction (Worldwide) Ltd. 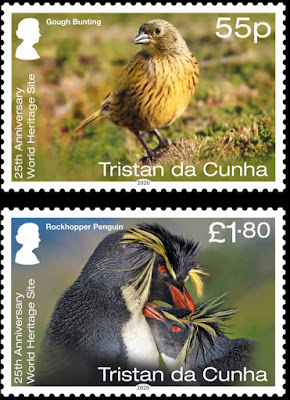 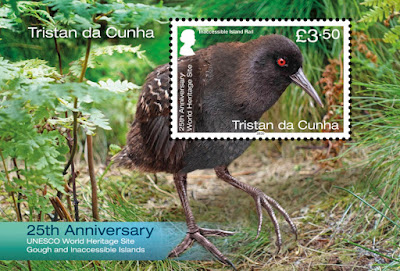 🇫🇰 The postal service of The Falkland Islands will issue a set of 4 stamps on 16 March 2020 as the fourth part of its ongoing Ship wrecks series. The issue was designed by Tony Chater and lithographed by Cartor and perforated 13 x 13.5. Rating:- ****. 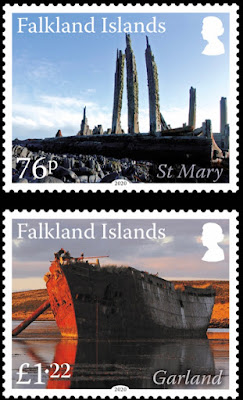 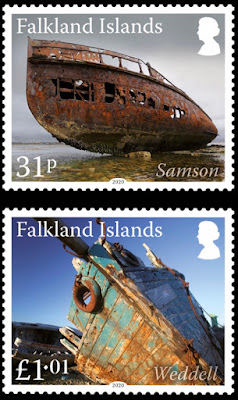 Many thanks to Juliet Warner of Pobjoy Stamps for information about the above two issues.

🇺🇸 The USA-based philatelic agents, IGPC, has outlined the latest products it is letting loose on to the new issue market. In the past few months there seems to have been a fall in the number of ‘issues’ it releases with the names of its client territories printed on them and which have been produced by the agency itself (Grenada, Antigua And Barbuda and The Gambia for instance) rather than merely being sold by them but produced by someone else (Guernsey Post for instance). Perhaps the general collapse of the new issue market which has been the result of excessive stamp issuing over the years and which all started with the activities of IGPC itself is now resulting in a case of being ‘hoist by its own petard’. Thus we have only 5 new issues for Commonwealth philatelic entities:-

🇬🇲 The Gambia - 24 February 2020 - Chinese art of Dr Wang - 2 miniature sheets, one containing 3 different stamps and the other containing a single stamp. Rating:- 0.

🇬🇩 Grenada - ?2020 - Rabbits - 2 miniature sheets, one containing 6 stamps and the other containing a single stamp. Rating:- 0. 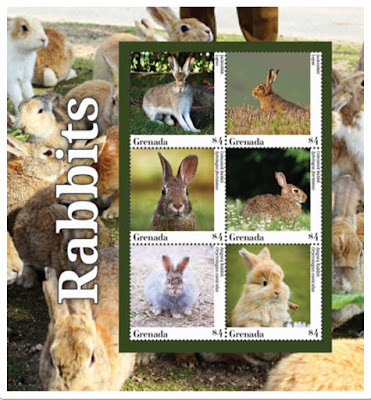 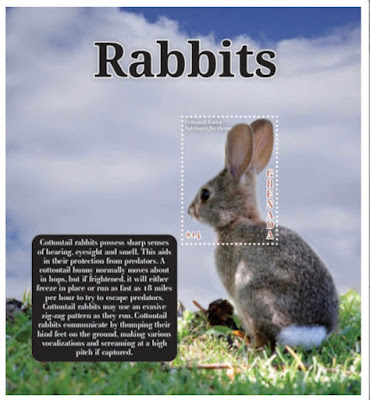 🇬🇧 Moving on to the latest philatelic product to be revealed by Royal Mail - a miniature sheet containing 4 different stamps (1 each of the Scottish regional stamps) to commemorate the 700th anniversary of the signing of the Treaty of Arbroath (see Blog 1579). This item with its exquisitely uninspired design will be sold from 6 April 2020. Clearly Royal Mail was trying to save money on designer’s fees when this product was conceived. Rating:- 0. 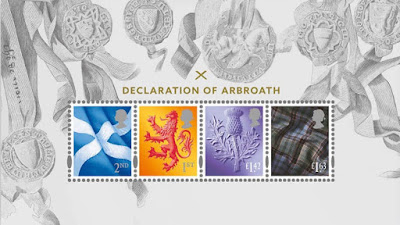