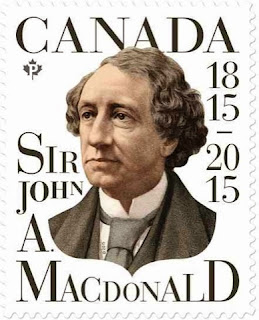 Canada Post issued a single stamp on 11 January 2014 to commemorate the Bicentenary of the birth of Sir John Macdonald who was the country's first prime minister after the founding of The Confederation of Canada in 1867. He remained in office until 1873 and then returned to power from 1878 to 1891 and was prime minister for longer than any other Canadian leader apart from William Lyon Mackenzie King.
Macdonald was born in Glasgow in Scotland on 11 January 1815 but his family moved to Canada when he was a boy and settled in Kingston in Upper Canada (eastern Ontario). When he grew up Macdonald became a lawyer and in 1843 was elected as an alderman in Kingston. In 1844 Macdonald stood as Conservative candidate for Kingston in the elections to the Legislative Assembly in Montreal and he took his seat in October 1844. His wife became ill and he took her to Savannah in Georgia but despite being away for 6 months he continued to gain political and professional advancement. In 1847 he joined the Conservative government in Montreal as Receiver General but after election losses the Conservative government was forced to  resign in March 1848.
After an election in 1851, a coalition government came to power in which Macdonald was made Attorney General. Macdonald became Premier in 1857. In 1858, Ottawa was chosen by Queen Victoria as the new capital of Canada and Macdonald was involved in notable political manoeuvring over the controversial issue.
In the following years, Macdonald moved in and out of power but the issue of constitutional reform came to prominence and a Great Coalition government was formed. A conference was held at Charlottetown in Port Edward Island in September 1864 where the Maritime colonies expressed a willingness to join a Confederation and at the subsequent meeting in Quebec City Conference seventy two resolutions were agreed which would form the basis for the future government of Canada. The delegates to the Charlottetown Conference were depicted on the 13c value of a definitive series which was released by Canada on 1 June 1935, the design being based on a photograph by G P Roberts. Macdonald is depicted sitting on the steps at the centre of the photograph:- 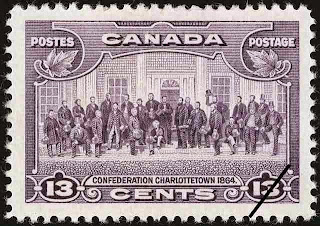 Representatives of the colonies met at the London Conference in 1867 and agreements made there led to the passing of the British North America Act on 8 March 1867 which received Queen Victoria's Royal Assent on 29 March 1867. The Dominion of Canada came into existence on 1 July 1867 with Sir John Macdonald as its first prime minister. The 50th anniversary of Confederation was commemorated by a single 3c Canadian stamp which was issued on 15 September 1917 and based on the painting of 1884 by Robert Harris which he titled "The Fathers of Confederation" and which depicted the delegates to the Quebec City Conference:- 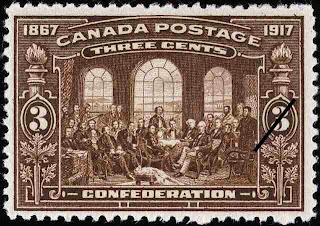 The centenary of the London Conference was commemorated by a single stamp designed by Paul Pedersen and depicted a group of delegates with Macdonald and Sir Charles Tupper at the front of the group. It was issued on 26 May 1966:- 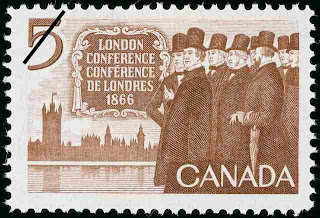 The Quebec City Conference was illustrated on a stamp from a set of eight which commemorated the 60th anniversary of the Confederation which was issued on 29 June 1927 - the design reproduced the design of 1917 but with additional figures incorporated in the design:- 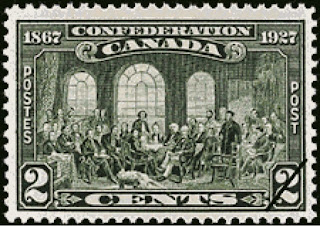 Sir John Macdonald was depicted on the 2c value of the same set and the 12c stamp depicted portraits of Macdonald and Sir Wilfred Laurier. They were printed in recess by the Canadian Banknote Company:- 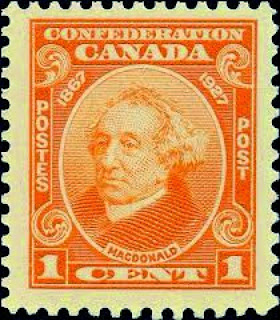 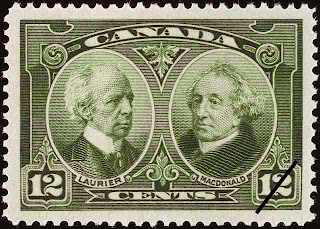 MacDonald was also depicted on the 1c value of the 1972 to 1978 definitive series of which the 7 lowest values depicted various former Canadian prime ministers. These stamps were designed by D. Annesley and printed in recess:- 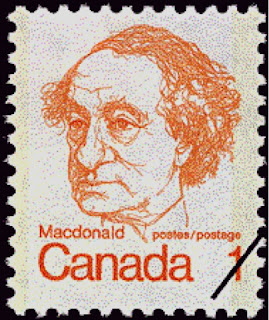 Macdonald died in 1891, aged 76. In the period between the establishment of the Dominion and his death he had dealt with many important issues. Some colonies had not joined the Confederation - voters in Newfoundland rejected membership in an election in October 1869 and would not become part of Canada until 1949; Prince Edward Island joined in 1873 and British Columbia became part of Canada in 1871.
The territories of The Hudson's Bay Company were transferred to Canada on 15 July 1870 and in 1880 the British Arctic Territory was claimed by Canada and later formed the North West Territories and Nunavut.
Macdonald dealt with the Red River Rebellion of 1870 after which the Red River Colony joined Canada as Manitoba. Macdonald was involved in the talks between the British and Americans which led to the Treaty of Washington which settled a number of issues between the two sides. Macdonald also had to deal with the financing of a Trans-Canada railway in the early 1870's and donations to the Canadian Conservatives by the United States-owned Northern Pacific Railway led to a political scandal. Macdonald resigned his first premiership on 5 November 1873 and the Liberals won the election of January 1874 and Alexander Mackenzie became Canada's second primeminister.

Macdonald returned to power in 1878 and work on the transcontinental railway eventually reached its conclusion on 7 November 1885. The leader of the Red River rebellion, Louis Riel, led a fresh insurrection in the North-West Rebellion in 1885 and after it was put down Riel was found guilty of treason and hanged - an action which alienated many Quebecers who, like Riel, were generally Catholics and culturally French Canadians.

Macdonald's Conservative party won the elections of 1887 and 1891 but he collapsed during the latter campaign and several weeks after his election victory experienced a stroke which left him partially paralysed. He died on 6 June 1891.
The new Bicentenary stamp was designed by Louis Gagnon of Paprika and lithographed by Canadian Bank Note Company.