Saint Lucia issued 2 Christmas stamps on 12 December 2014 which commemorated the Catholic Archbishop Emeritus of Castries, Kelvin Felix, who became the first Bishop from the English-speaking Caribbean area to be made a Cardinal on 22 February 2014, Saint Lucia's Independence Day. Cardinal Felix, who was born in Dominica, was Archbishop of Castries from 1981 to 2007. The $5 value depicts the Cardinal with Pope Francis. According to statistics of 2005, about 66% of the island's population is Roman Catholic. 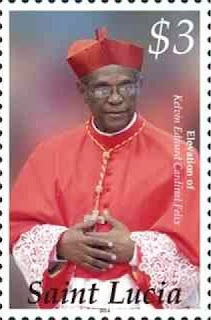 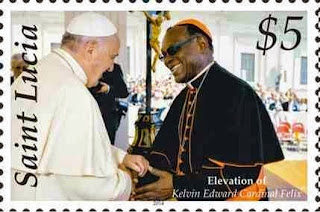 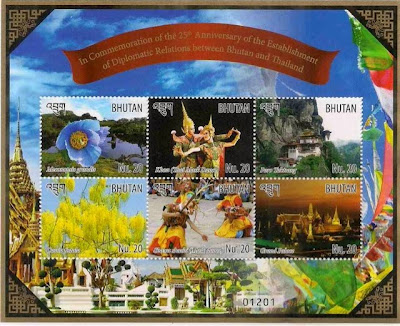 Bhutan Post issued 1 sheetlet containing 6 different stamps in November 2014 to commemorate the 25th anniversary of Bhutan's diplomatic relations with Thailand (depicted above).
Canada Post's first issue of the year will be, as usual, various items to commemorate the lunar new year, this time The Year of The Ram. The issue is comprised of a single gummed stamp from a pane of 25 stamps, 1 self-adhesive stamp from a booklet of 6, and 2 miniature sheets one of which commemorates the transition from the Year of The Horse to the Year of The Ram. The designer of the stamps was Helene L'Heureux from illustrations by Susan Scott and caligraphy by Ngan Siu-Mui and printinting was carried out in lithography, foil stamping and embossing by Lowe-Martin. The date of issue will be 8 January 2015:- 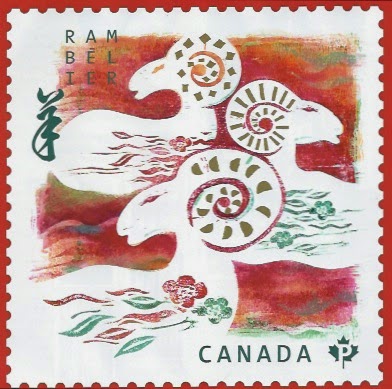 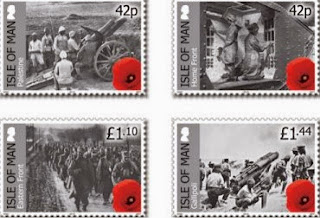 Isle Of Man will issue a set of 6 stamps on 17 February 2015 as part of its commemoration of the centenary of the First World War. The subject of this issue is "Battle Fronts" and the set was designed by CASCO and was printed in lithography:- 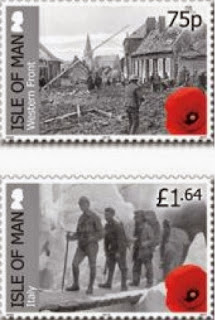 In Blog 499J I mentioned the set issued by Zambia to commemorate the country's 50th anniversary of Independence. There appears to have been a third miniature sheet issued as part of the set - this item consists of 5 different stamps each depicting one of the country's Presidents. These were, in order from Independence:- Kenneth Kaunda (1964 - 1991), Frederick Chiluba (1991 - 2002), Levy Mwanawasa (2002 - 2008), Rupiah Banda (2008 - 2011) and Michael Sata (2011 - 28 October 2014 when he died in office). The set was issued 5 days before the death of President Sata and so the current President, Acting President Guy Scott, does not appear on any of the stamps:- 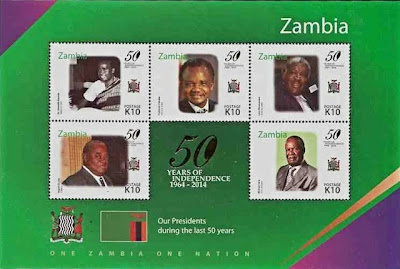 Cyprus issued a set of 3 Christmas stamps on 24 November 2014 (previously mentioned in Blog 494 but better illustrated here). The set was designed by Yiota Tsiaklidou and lithographed by Giesecke and Devrient Matsoukis:- 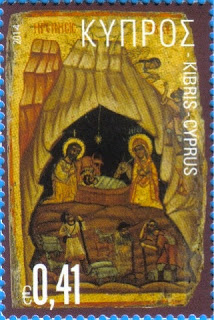 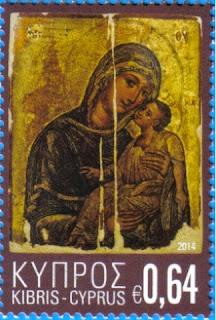 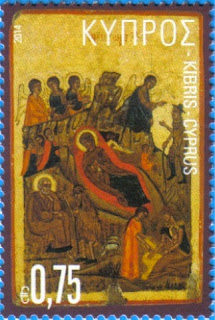 Namibia issued a set of 5 stamps on 1 October 2014 which depicted species of kingfishers. The set was designed by Anja Denker:- 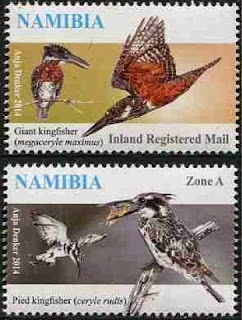 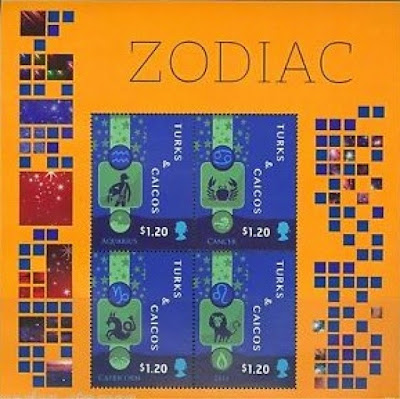 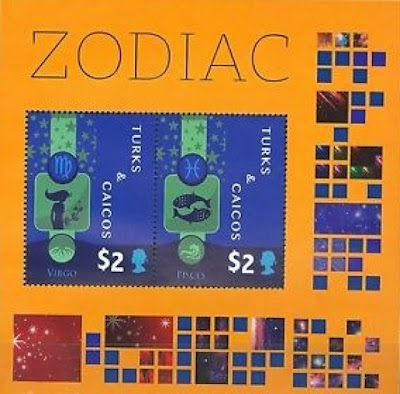 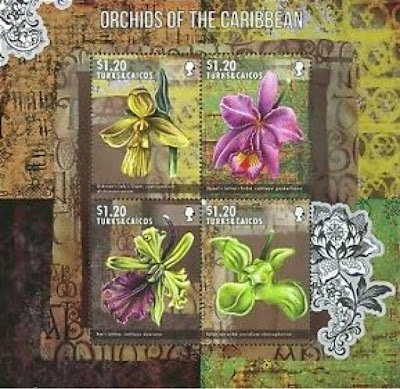 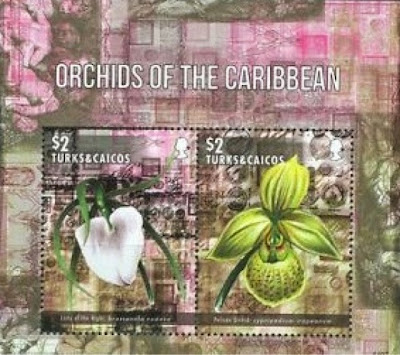 At the end of 2014 four Commonwealth countries were still allowing Stamperija to produce philatelic products in their names:- Mozambique, Uganda, Maldives and Solomon Islands. That organisation has made a further announcement of new products which have been produced in the name of Solomon Islands:-10 sheetlets each containing 4 different "stamps" and 10 miniature sheets. Although a small proportion of these latest products are on subjects which have local relevance in Solomon Islands most do not:- Traditional dancing, The fight against malaria, Sailing tepuke, Deng Xiaoping (former leader of The People's Republic Of China), Martin Luther King, Lighthouses, Barracuda fish, Chess, Scouting and the Concorde aircraft.
The "date of issue" of these products is given as being 20 November 2014. This brings the total number of "stamps" issued in the name of Solomon Islands during 2014 to 312 with 78 accompanying miniature sheets which is a grand total of 390 philatelic items. 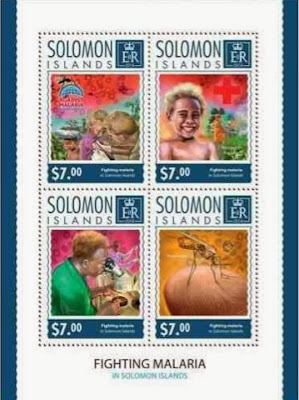 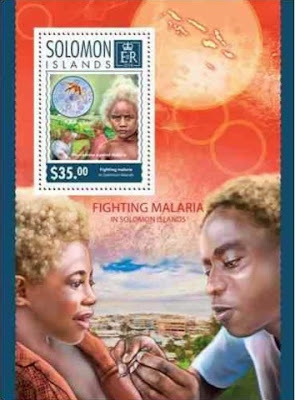 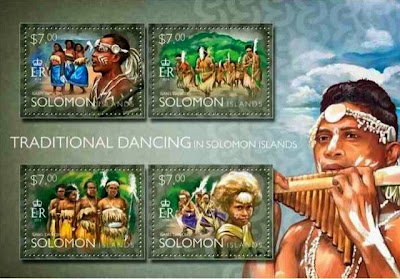 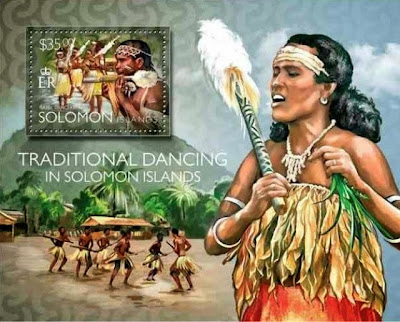 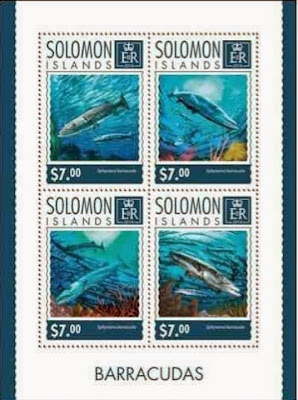 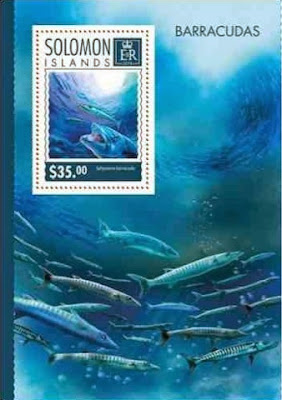 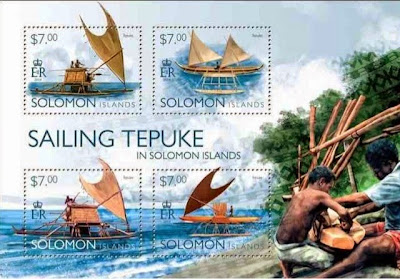 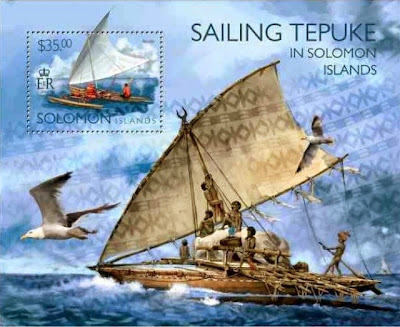